A Fistful of Doom

FISTFUL is a total conversion which goes on to change what we know of Doom by stepping away from those high tech labs and fiery pits of hell, instead taking players on a journey to the old west across two maps, complete with new graphics and audio.

The two guys behind this old classic have pulled off the western theme incredibly well, even going as far as to modify the regular enemy graphics and giving them a new wardrobe to perfectly fit into the style. Zombiemen will now represent wanted gunslingers, intimidating sheriffs and Mexican bandits. These sprites look clean and well crafted, managing to keep that same Doom feeling intact. The hud has also been given a stylish wooden makeover along with our favourite marine’s mug, unshaven and smoking a cigar. Several new textures and decorative sprites have also been included to help create authentic locations from the Old West and employs several mapping tricks to fake various structural details and aspects of realism for building architecture, providing the two levels an additional layer of depth in their design. 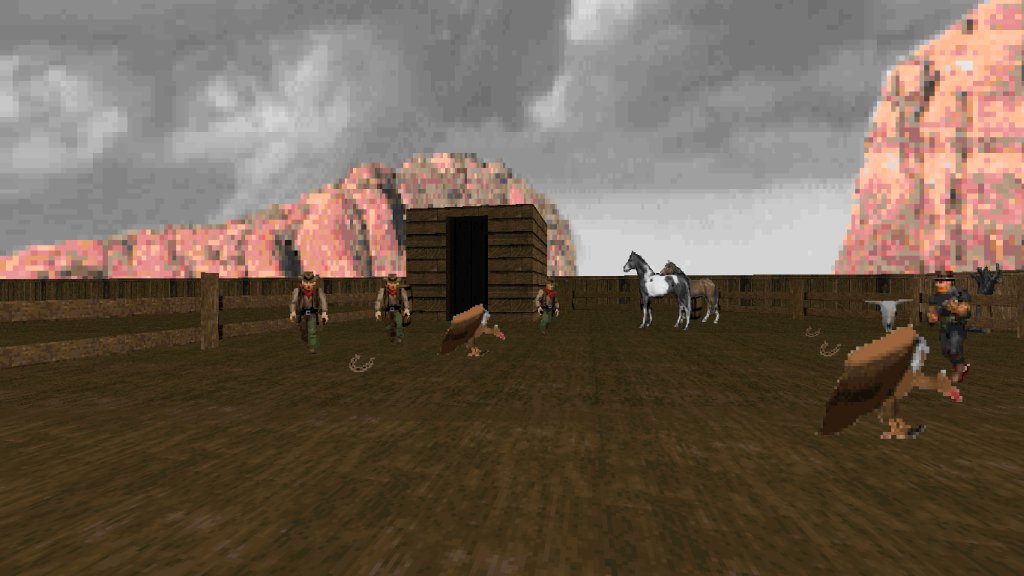 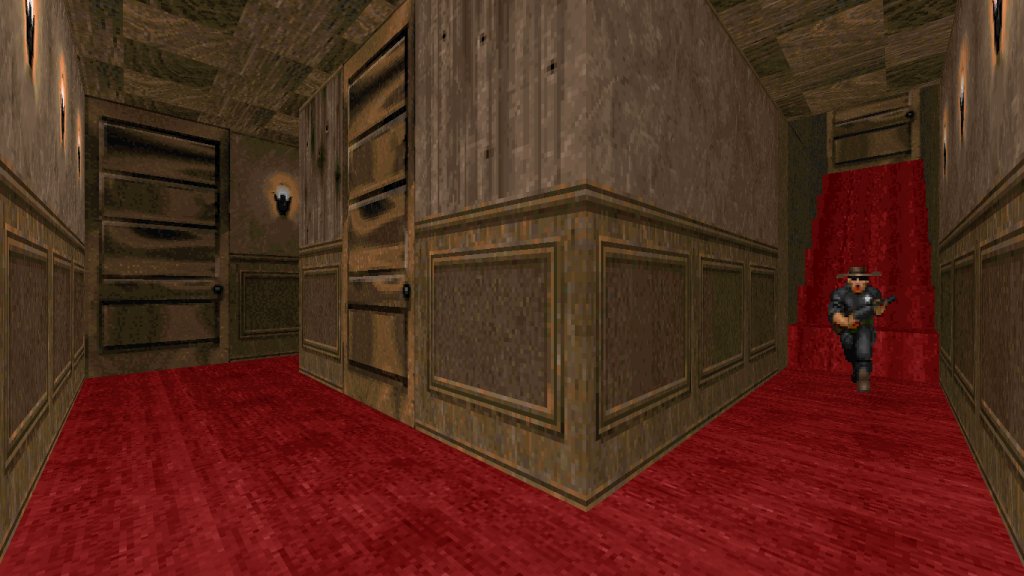 FISTFUL will start off with a loud bang. Well many in fact, being attacked almost immediately after getting in game. The action can be pretty relentless with the majority of enemies wielding revolvers and shotguns, firing from all sorts of directions like windows or balconies. There’s little in favour for players with a limited number of health items and indoors not being any safer to dive into for cover. Taking care not to get hurt too much will be absolutely essential for survival or that one stray bullet will be the last. Increasing your luck is helpful by locating as many horse shoes possible, this wad’s equivalent to armour, with each one providing only a minor boost. Health is very similar too, with several booze bottles scattered about only replenishing a single point while the more nutritious food items are less commonly found. Gameplay can be brutal, but with enough patience and it can be conquered. 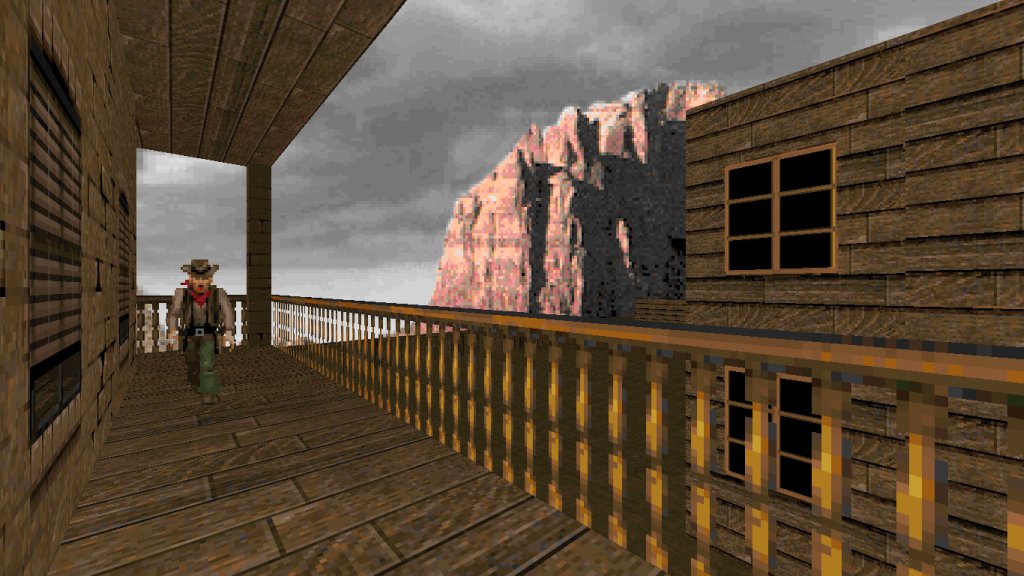 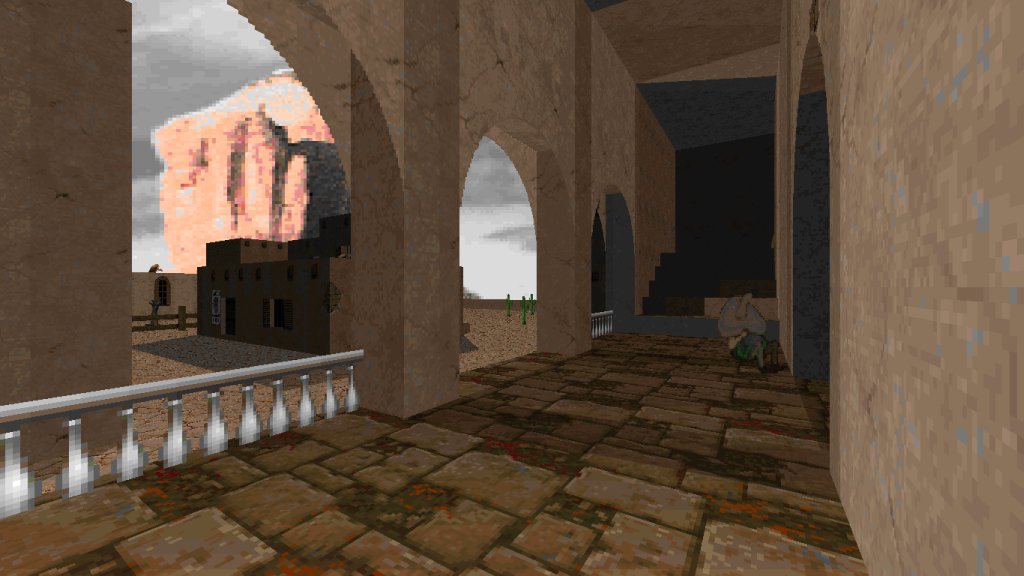 Only found myself having two personal issues while playing through this wad, so lets get the negatives out the way before moving onto the maps themselves. The first is a minor annoyance regarding enemy death sounds, using extracts from The Good, The Bad and the Ugly theme, which do become grinding on the ears after hearing it repeatedly, especially when multiple foes are gunned down at once. Sure the sound might come across as iconic and fitting with the chosen theme, but is simply overused. The second problem was more troublesome for gameplay, in regards to the key sprites. These items are visually small amongst the world, lack colour coding and there appears to be no indication for them on the hud. As a result I found myself running around a headless chicken not realising that the key that was needed to progress was already snatched up while in the middle of a battle somewhere. The only way I could find out was after trying each of the locked doors once more. 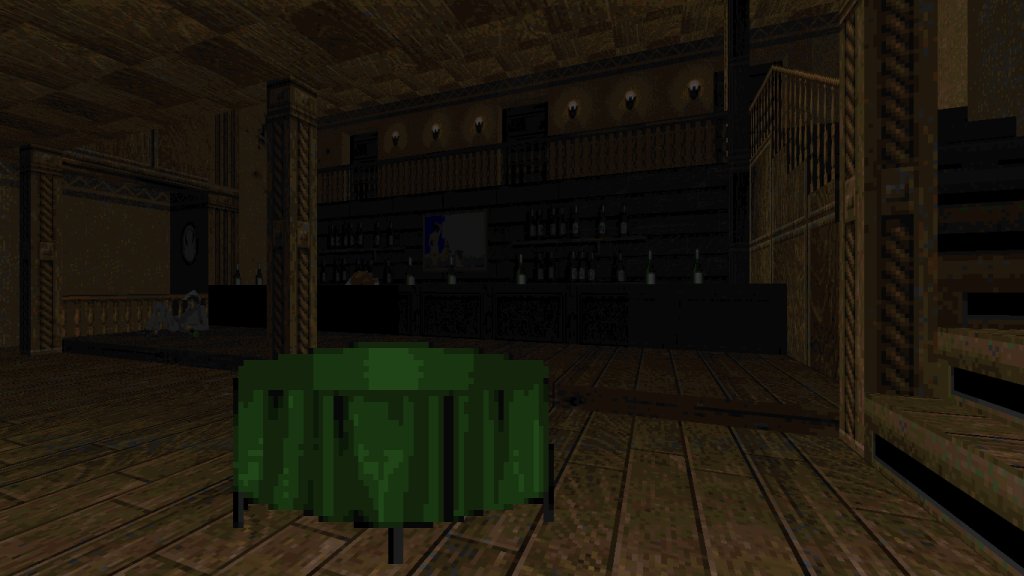 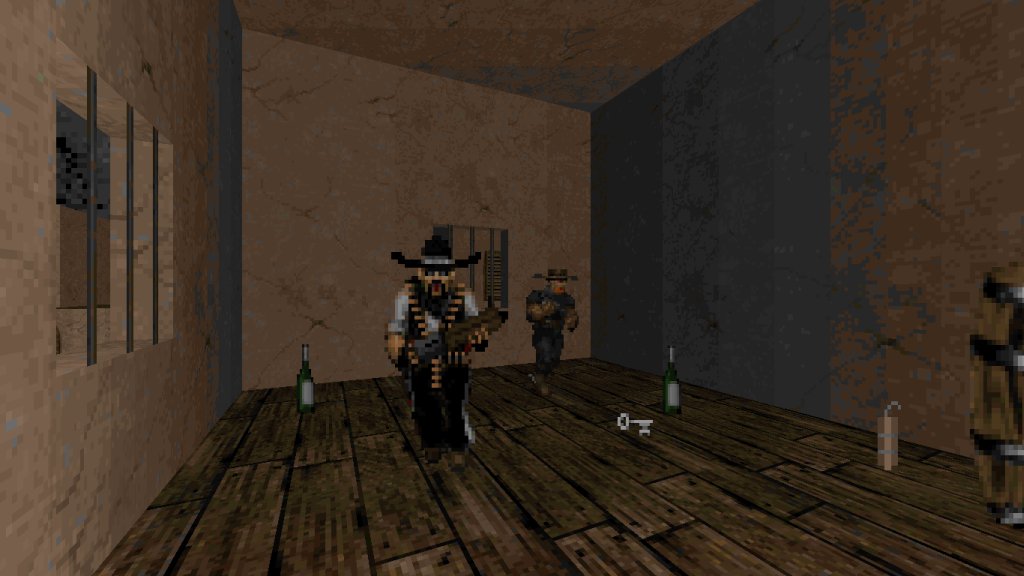 What would a western theme be without a good old desert town from the wild west, complete with all the buildings one should expect to see in one; the local saloon for patrons to wet their whistle, a jailhouse for the local thugs, various shops looking for business and finally a bank in the far rear with money bags just waiting to be stolen. The town is both well structured and designed but suffers slightly from a simplistic layout. Each interior is also decorated just enough, while avoiding clutter, to match their intended purpose. Too bad the barber shop was on the empty side though. Use of window textures instead of holes cut into walls allowed places to present a better sense of realism when seeing an actual frame. Other nice details can be found in the open from horses waiting for their owner, vultures perched on fences and a clever trick with the wall mounted super shotgun. 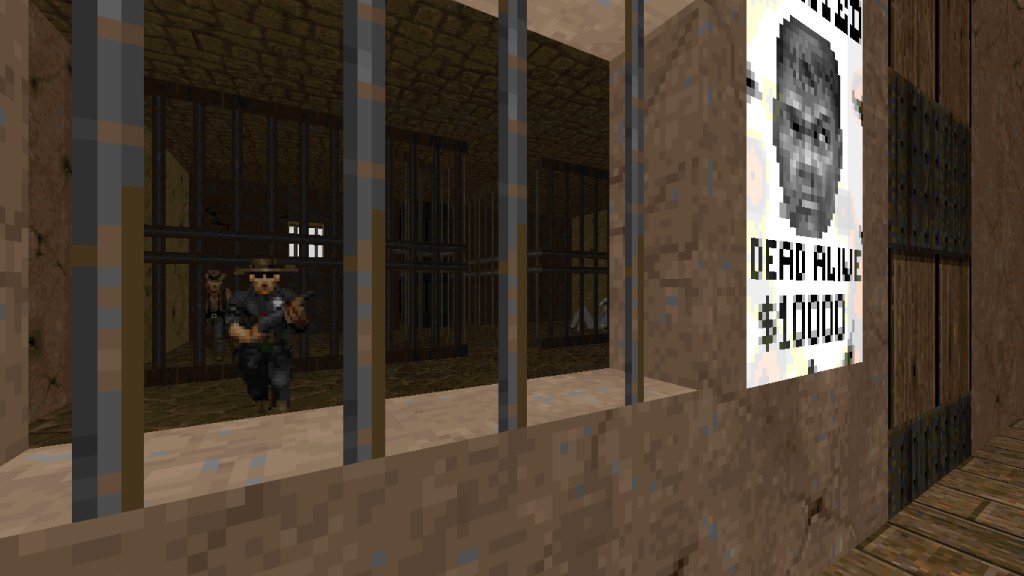 This time we step into Mexican territory and fight it out in one of their small towns, a less exposed level, when compared to MAP01, with many buildings dotted around helping to fill up the space and providing much needed cover from gunfire. Though naturally high threats still exist and tends to be lurking on rooftops instead. Chaingunners will also make their appearance here and perhaps the number one danger, usually sniping from behind open windows and become a real nuisance. There are much less interiors to roam inside, focusing more toward outdoor combat. One such place is the villa littered with bandits and the other is a church, our final destination. I liked how the church looked, a good example of the original Doom engine being forced to fake certain architectural elements well, using a series of arches to create a bell tower at its peak. Many other structures also use similar tricks to approach more authentic looking pueblos with small doorways and windows. Soutec also takes the design one step further here by having directional sunlight, casting large shadows behind every structure. 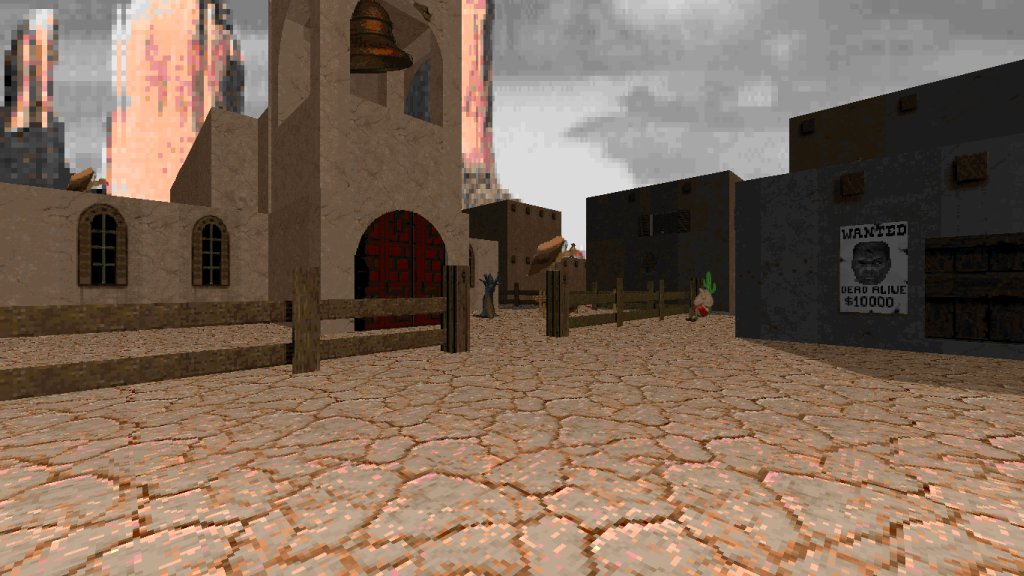 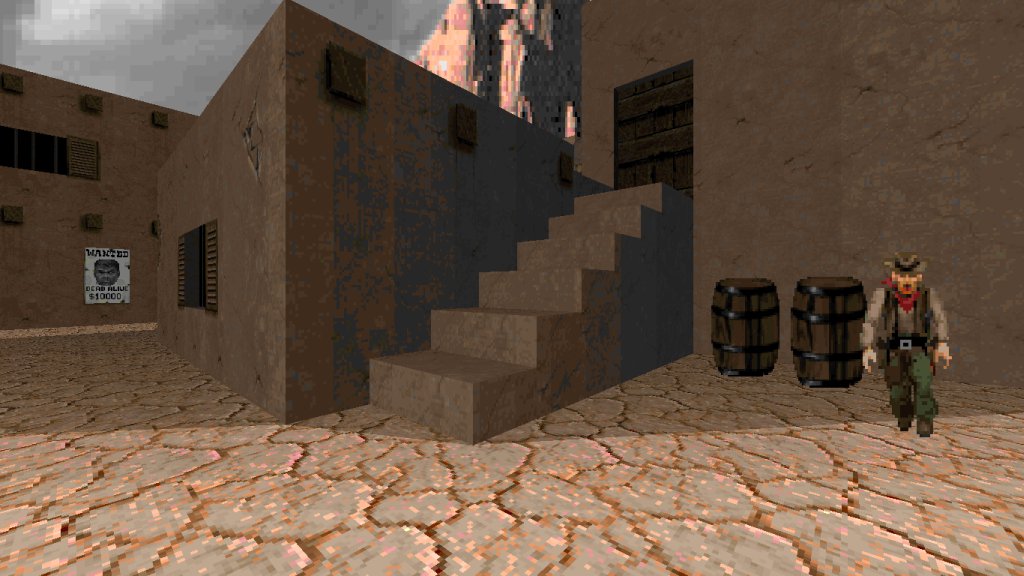 FISTFUL is considered a classic, offering a tough and relentless journey where survival won’t be an easy ride. Its biggest fault however is for being far too short! A real shame really, since I enjoyed its visual style and would have loved to explore other levels using the western theme.