ODARK is heavily inspired by Episode Four from the original game, more specifically both E4M1 and E4M6 and focuses a level around a darkly lit and atmospheric gothic theme. Requires a limit-removing port to play.

The influence from Thy Flesh Consumed is clearly shown right after loading up the wad, designed with the same spirit in mind only instead leaning closer to a wooden texture scheme while small portions of marble bleeding through. Visual style and lighting does an excellent job to enhance its atmosphere, with XPLASMA.MID; a fitting track from Duke3D, playing in the background. Another nice addition is that lovely orange sky I’ve always liked having this subtle difference, slowly moving to emulate the clouds drifting by. Even here the sky works well and fits in perfectly, while creating this sharp and effective contrast against the many brown tones. Level detail is done by keeping it out the way of combat, adding variation inside of geometry and mixing up the texturing, or through smaller means of decoration like the candles along edges of walkways. Lava is also used as a cosmetic feature which luckily doesn’t harm players considering they need to walk over it at points, the lava still feels more in tone here than either water or toxic would. I also quite like the wide use of curves across the map like in the red skull room key, round edges being applied to the four way path and looking really nice as a result of this simplicity. 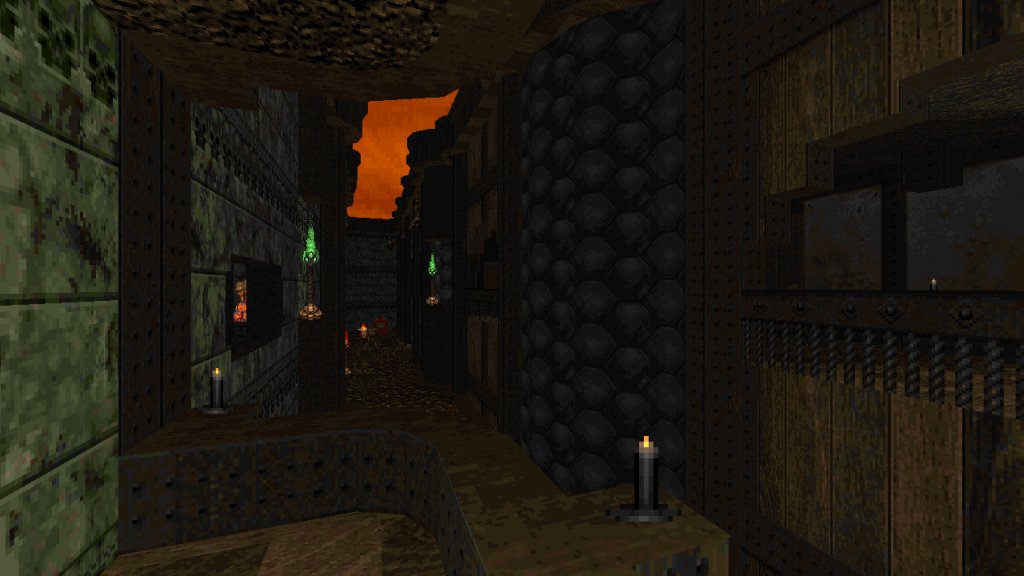 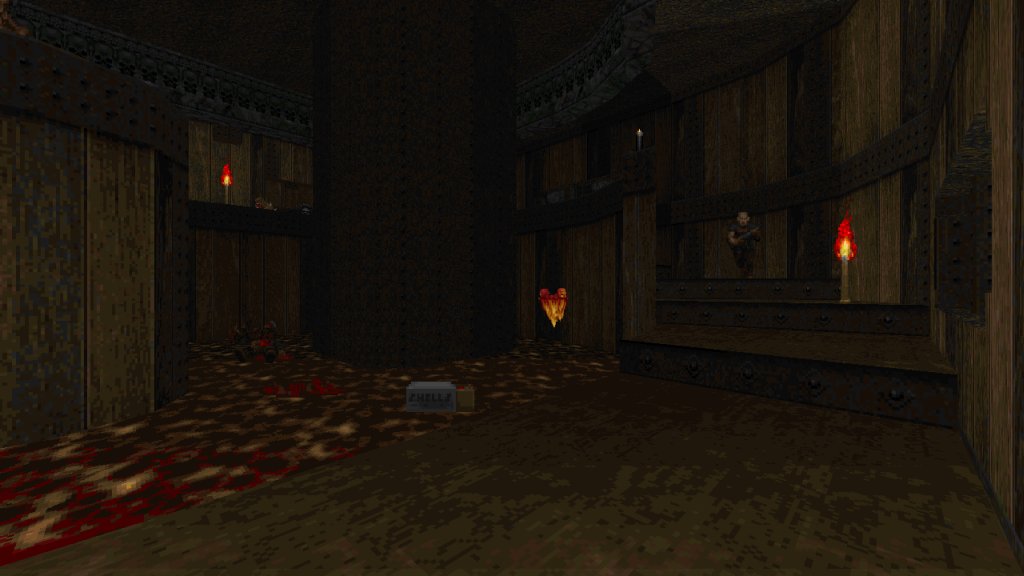 The action starts off relatively tame for a short while and doesn’t shy away from using a wider choice of enemy types right from the start in a single area, ensuring that combat is both varied and engaging. ODARK is a linear experience and doesn’t do much in the way to hide that, constantly pushing players forward in a single motion regardless of any twists and turns that are made. There is very little actual backtracking involved and keys can be used nearby after acquiring them. Locations themselves usually range from small corridors to mid-sized rooms, approaching combat in a tighter and close quarter fashion, but at times can also be an easy cause for infighting. Gameplay picks up quickly though with a constant stream of demons loitering inside rooms and may become a little frantic, with certain actions calling in a new army to fight off or springing an ambush in wait. Spawns are more often than not going to be Cacodemons, a favoured enemy type I noticed in which Krishna sure enjoys throwing out a large number of them. But they do work well in the given environment, especially when trying to avoid their projectiles where the space provided doesn’t allow for much movement, giving the flying brute a higher chance to hit their prey. Nothing comes across as being too tough or unfair though and there is a well balanced supply of ammo and health to gather up. I’d perhaps say the only negative is that ODARK ends a little too abruptly, only because the final area felt incredibly tense for a brief moment. 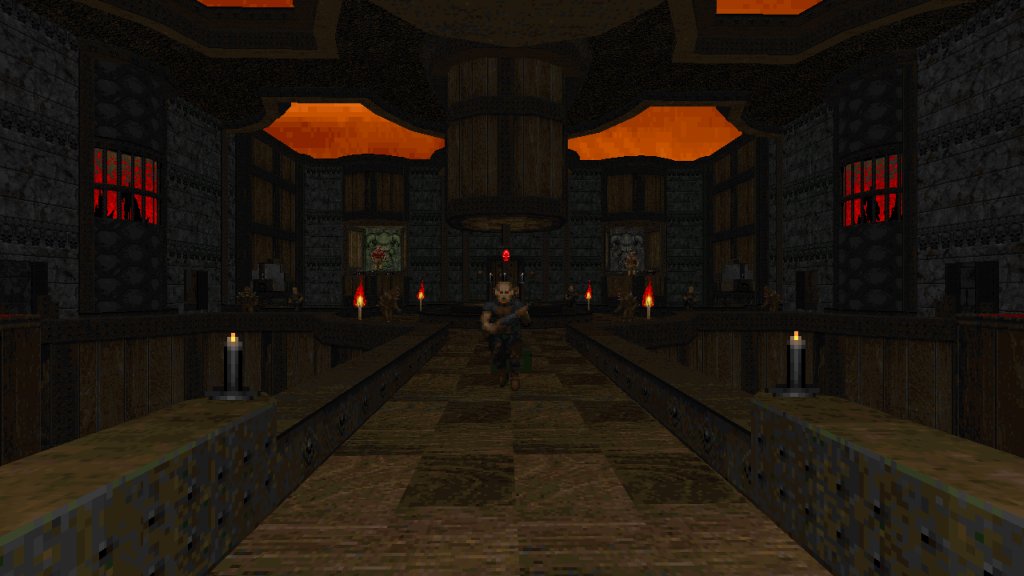 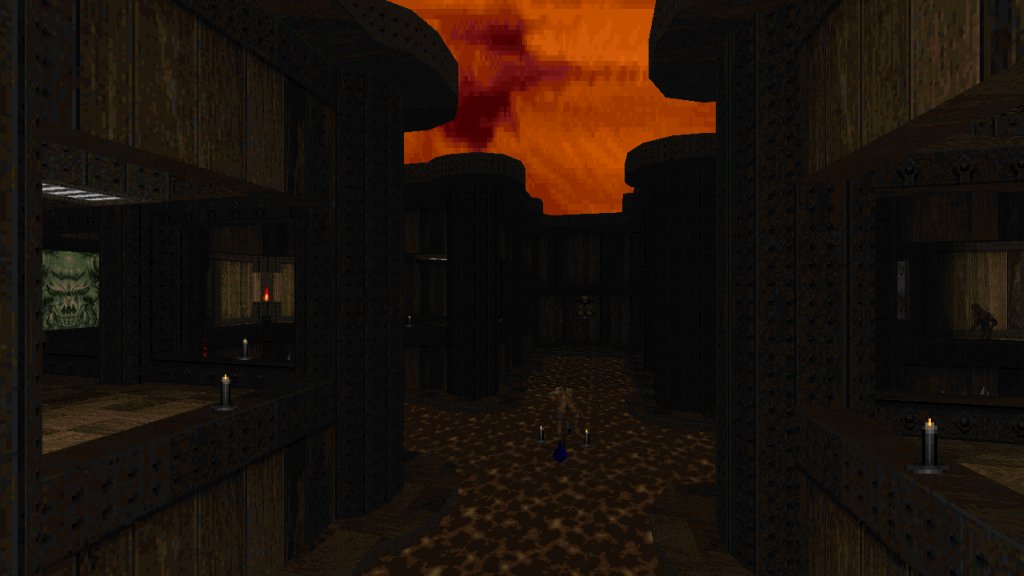 ODARK does a great job capturing that Episode Four atmosphere, only enhanced through a well presented visual design and moody lighting. The action is constant against a variation of enemy types, while progression is straightforward and feels quite linear with very little backtracking.