What happens when you take Duke Nukem Forever, the 2001 trailer, the Build Engine and throw them into a blender? Well it could be anything! But in the hands of Gambini and Mikko Sandt, this release was the results of their vision.

DNF 2013 is an episode consisting of five maps, which had been based off the old footage shown during the Duke Nukem Forever trailers that débuted over the years, in particular the 2001 trailer. The mod then implements these various ideas, locations and scenarios that once excited and hyped up the fan base and expands on top of them to create a Duke3D sequel in their own vision, possibly overshadowing the notorious version released in 2011. The adventures begins in Las Vegas, with Duke staring out of his apartment window from the upper floors of his Lady Killer Casino and takes note of a sudden alien invasion taking place and decides that once again, he’s going to kick some ass. During the course, he will be taking a long trip away from city life and into the dried out deserts, speeding across a highway toward the EDF Headquarters; passing through an old ghost town once known as Morningwood; exploring the depths of its nearby abandoned mineshaft; before finally reaching his final destination, the Hoover Dam. 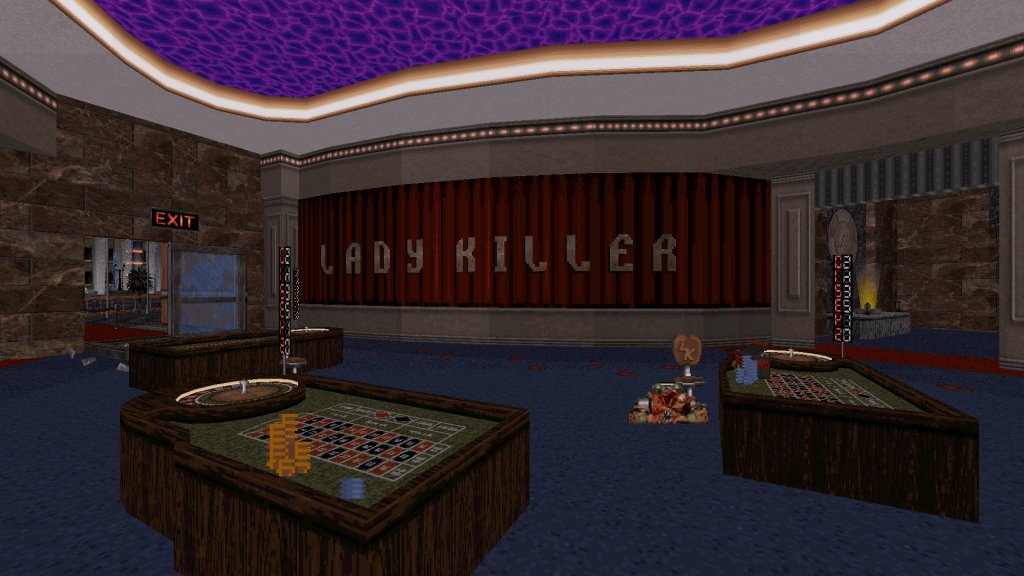 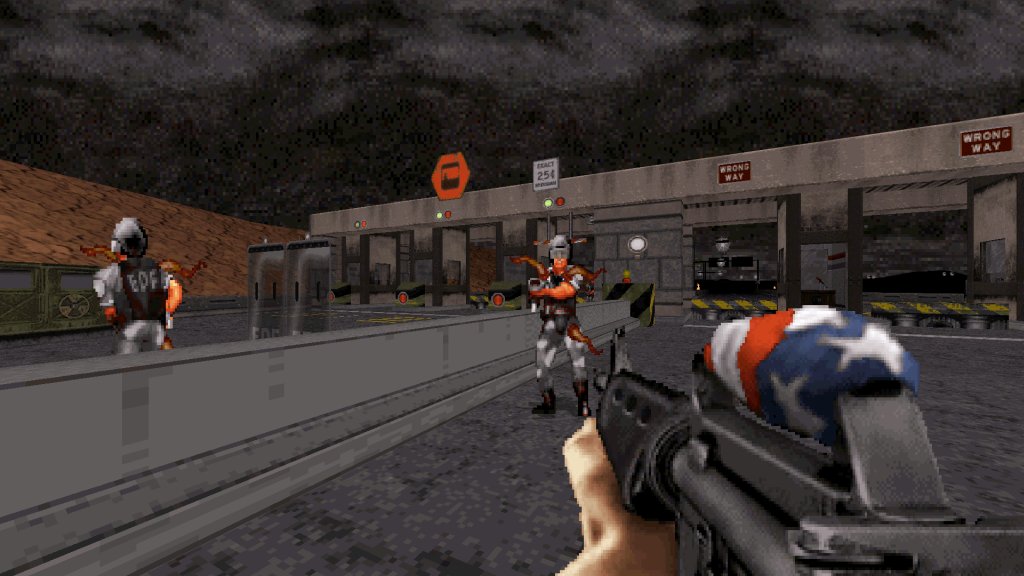 New enemies will be introduced along the way to complete the package and no doubt look great, but unfortunately these enemies do not pose much of a threat to players. Pigbeasts take the form of a wilder and bulkier version of a Pigcop without a shotgun, preferring to get close and personal to unleash a fury of painful swipes. Problem here however is that they rarely get much of a fighting chance, being dispatched quickly with two fine shotgun blasts and only dying in vain. Then we have the T-800 which are Terminator like robots with a powerful laser cannon. But much like the Pigbeasts, these too are easily dealt with before many shots get fired off. These flaws hold true for many of the other new guests, including the final Boss, and therefore don’t provoke much of a challenge. Their existence is seemingly only here to provide extra flavour to feel closer to the authors’ intended goals and nothing more. The sprites hold up well and fit amongst the vanilla enemies like a glove. Found the infected EDF Soldiers to be a nice touch and their voices on the humourous side. I especially enjoyed the creepier visual and audio changes to Slimers too. 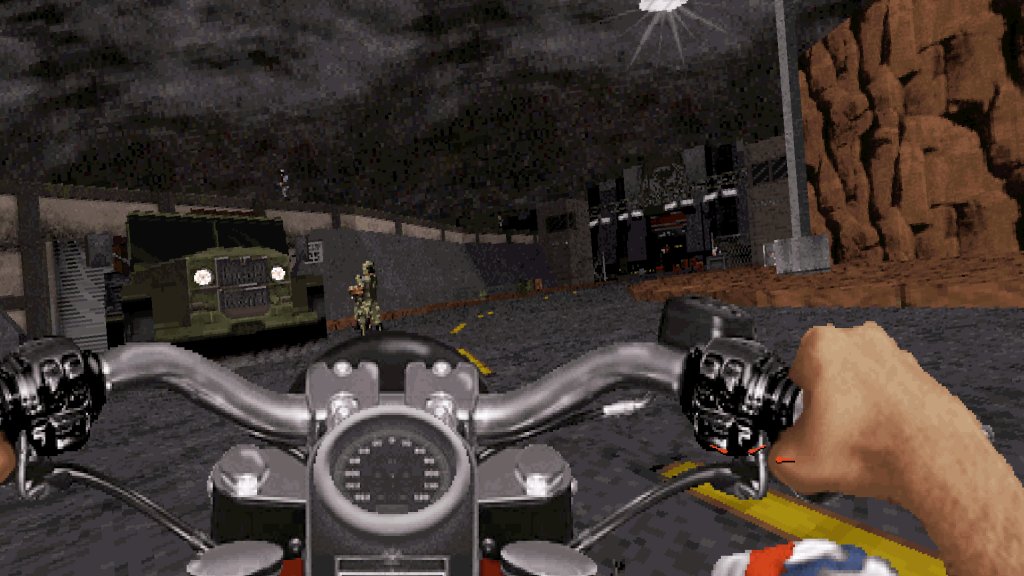 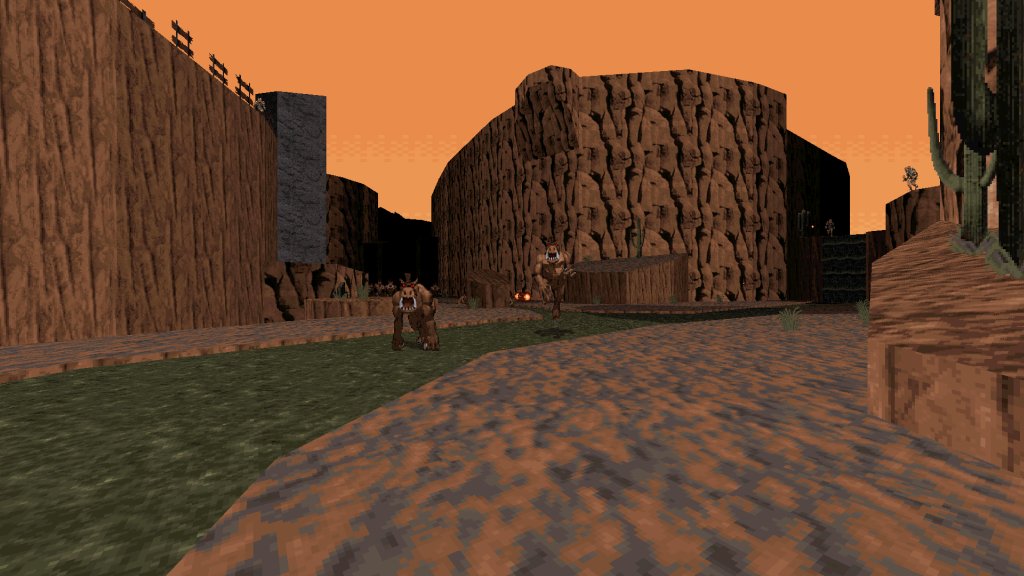 All the levels are linear in nature with very few diversions, intended to create a much more tighter experience which focuses on immersing players on a journey through seamlessly connected locations, moving from one set piece onto another. The mapping does well to boast its scale and grandness by presenting sprawling scenes of open and expansive cities, dry deserts and other distant views, while also ensuring that the level of detail is still always high. These locations tend to feel quite believable through excellent work with sprite work, texture usage and the amount of shape and structure across the board to complete the overall composition. New textures and sprites have also been created and most of these, minus a couple, fit along side the default assets style consistently. Design does however suffer from a lack of polish in many areas, including but not limited to misaligned or overstretched texturing, incorrectly place tiles and other minor inconsistencies. 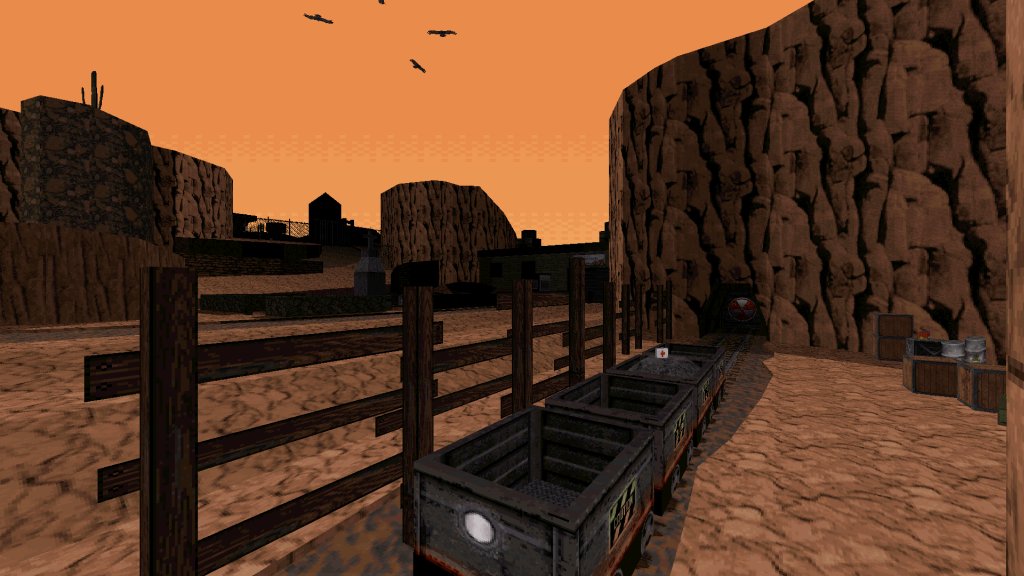 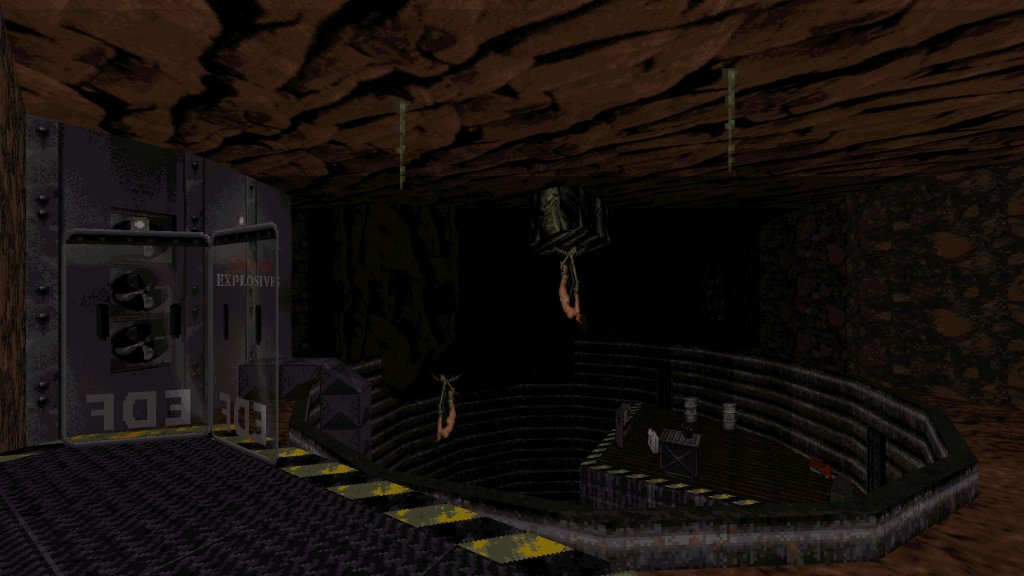 The gameplay tends to lean on being average having many high and low points, but does occasionally show improvements overtime. Combat is perhaps the weaker aspect, only offering various small skirmishes and rarely putting the player on edge. This can actually be a result of the large and spacious levels affecting the balance against enemies, being more in favour toward players. The pacing also has a part in the problem too which feels as if we are mostly travelling between one scenario shown in the trailer and then making way to the next. Much of the experience in between tends to feel a little empty. Key card acquisition for one is a simple means to progress forward that amounts to little. For example, during the first level we fight a few enemies and take the elevator up to an office where a key card sits on the floor. All we do is grab it and head back down, no further enemy resistance in this room. This happens a little too often across the maps and not limited to keys, where something as simple as the aliens blowing open a wall to provide a shortcut and additional action would breath more life into the level and not come across as mere filler. 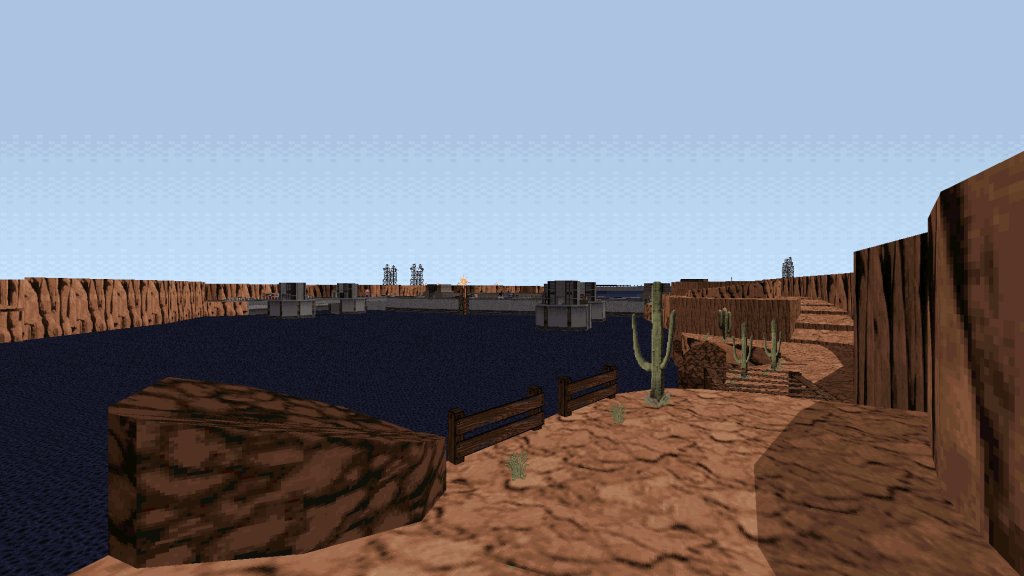 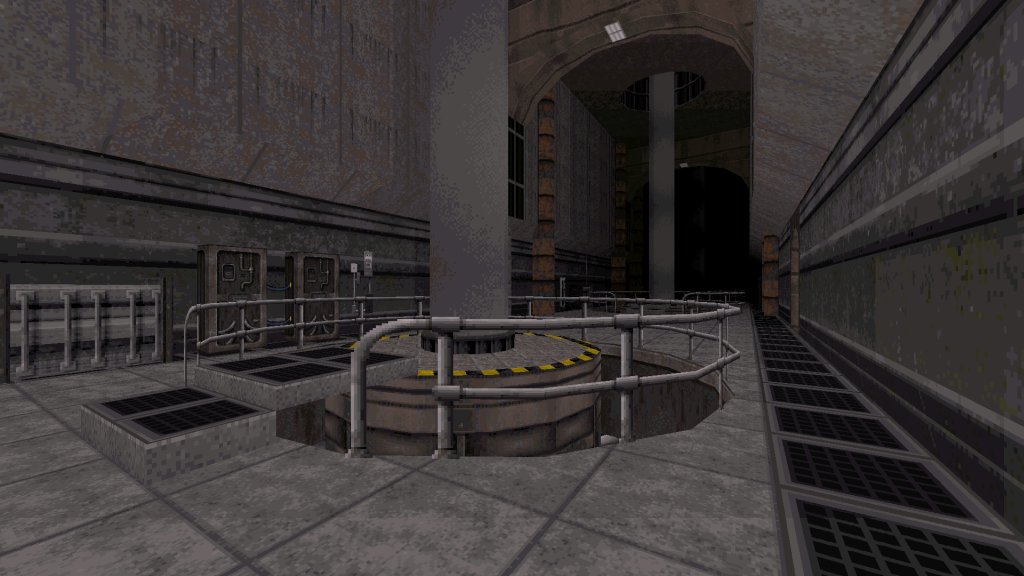 Begins after a short introduction sequence and dumps players in full view of Las Vegas at night as seen during the 2001 trailer, with many neon lights glowing in the distance and other buildings standing tall. No doubt an impressive first impression. The casino segment itself is only a small fraction of the entire level which would have been nice to spend more time in other areas considering it is one of the iconic locations from the full game. Personal nitpick here regarding the lighting which lacks some needed depth and contrast between bright and dark. This comes across as monotonous and very noticeable in the casino main hall and night club, taking away from the atmosphere. For an alien invasion the city was surely too quiet which might have benefited from the odd building getting destroyed when players make progress. 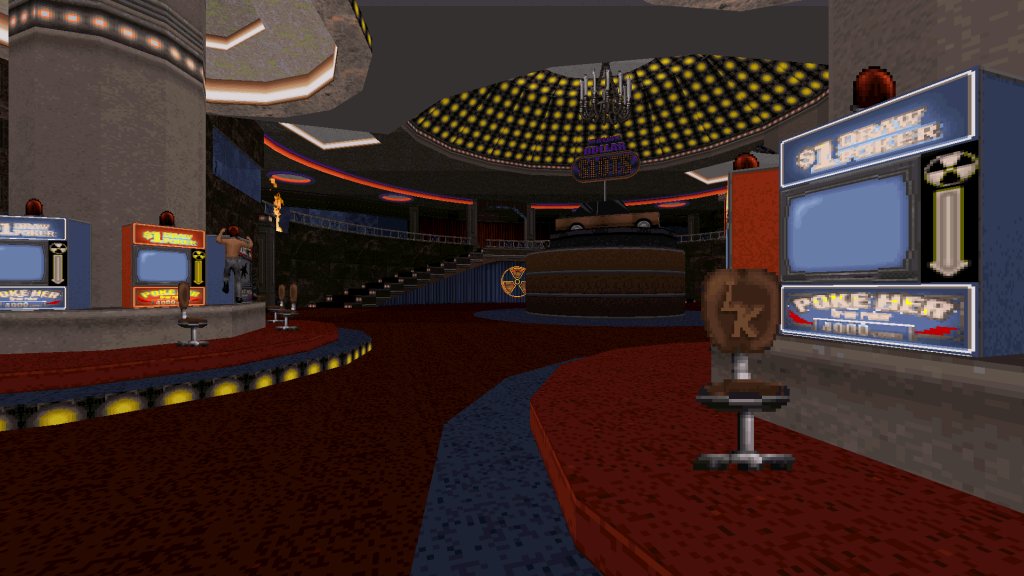 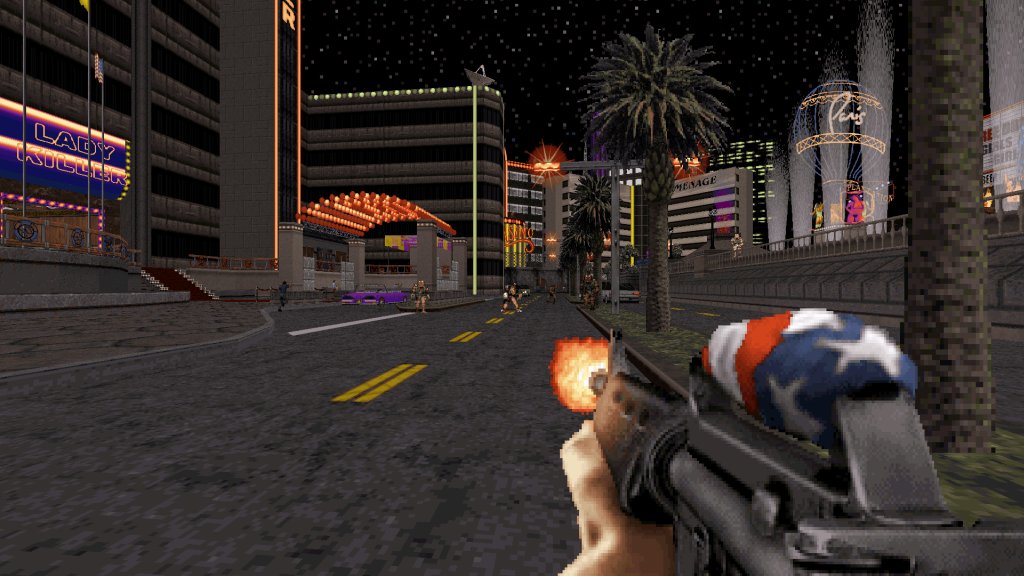 Split into two distinctive halves, the first focusing on the journey toward the EDF Headquarters by riding a motorcycle. I don’t usually find vehicle sections all that exciting in first person shooters and tend to have negative bias towards them, however the one here was surprisingly enjoyable to use. Smooth and responsive controls helps a ton and allows driving at full speed while tilting around corners to become a thrill to play around with. The bigger concerns come from odd deaths when crashing into small objects on the highway and other oddities due to bugs in the code when driving on slopes. Otherwise the positives outweigh the negatives. The second half makes way right upon strolling into the EDF Headquarters, an impressive view one again that could be mistaken for a real location. Immersion is played further with EDF soldiers loitering the car park as if interacting amongst themselves. The action starts of pick up here when things go haywire and also a level which contains the most material from the trailers. Especially loved the visuals for the raising truck and blue lighting shing through the vent grating. There is a bug worth mentioning regarding the shooting range door when interacted with more than once, preventing access through it because Duke won’t squeeze through properly and then requires a noclip. This happened during my first playthrough but seems fine if left alone after opening once. 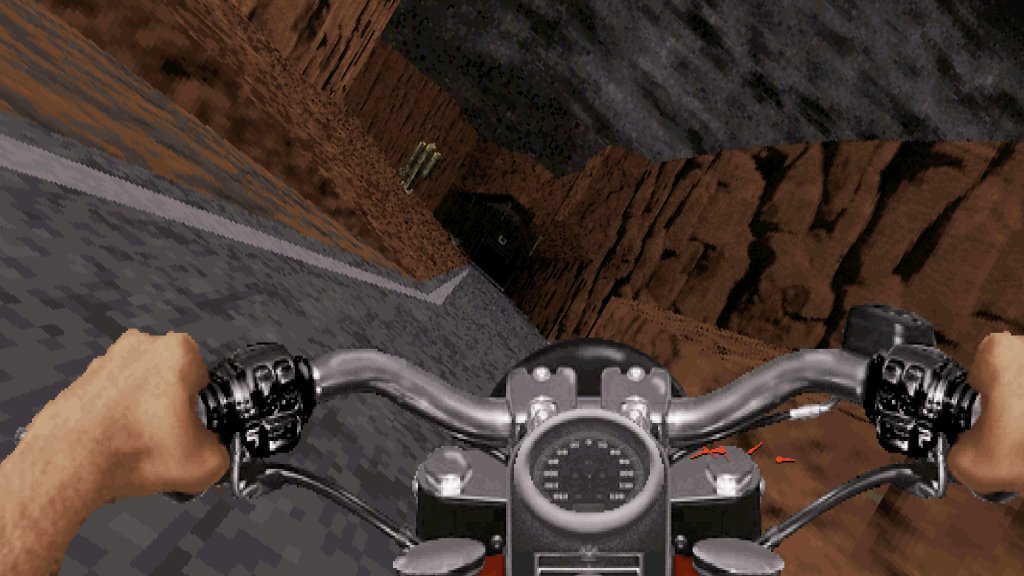 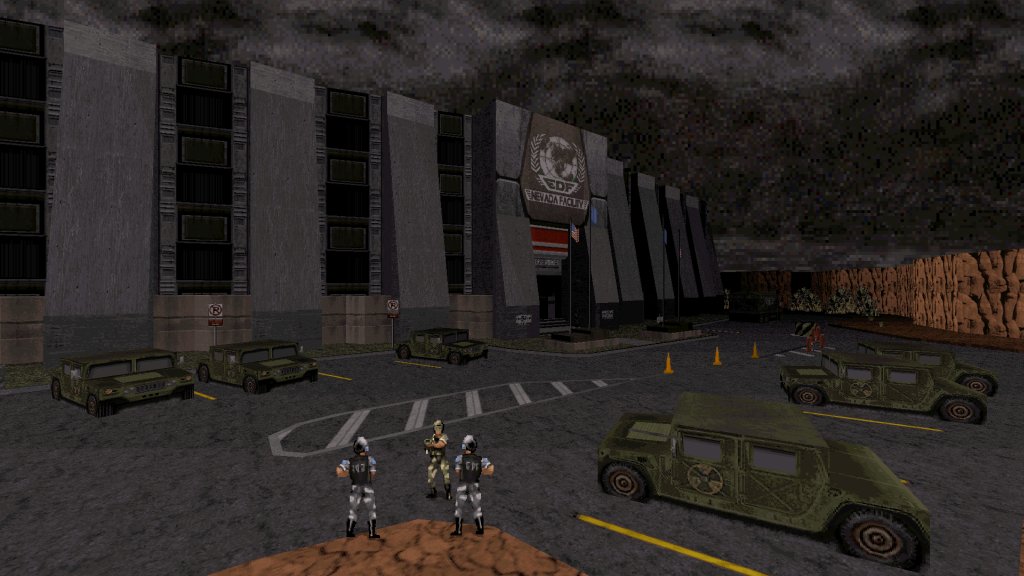 Shares similarities to the pacing of EDF Headquarter’s earlier segments, except this time we travel by foot and through a canyon area in the blazing heat in order to reach Morningwood town. Pigbeasts are used quite often here and doesn’t do them any favours by revealing their weakness to open spaces. Would have been best placed to catch players off guard with other enemies distracting them, much like the Troopers already do as they fire down from high ledges. The cable cars provides one of the core visual vistas this time, a structual feature that doesn’t appear too often in Duke3D levels, especially on such a large scale and done so well. Morningwood itself is also pretty authentic looking for an old western town and those vultures circling an area of town really provide a nice touch. 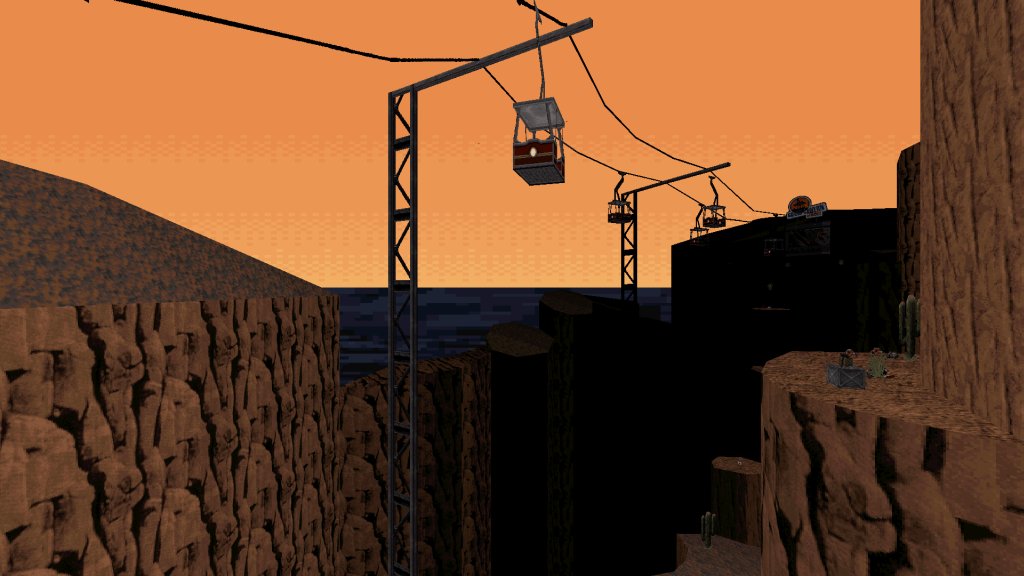 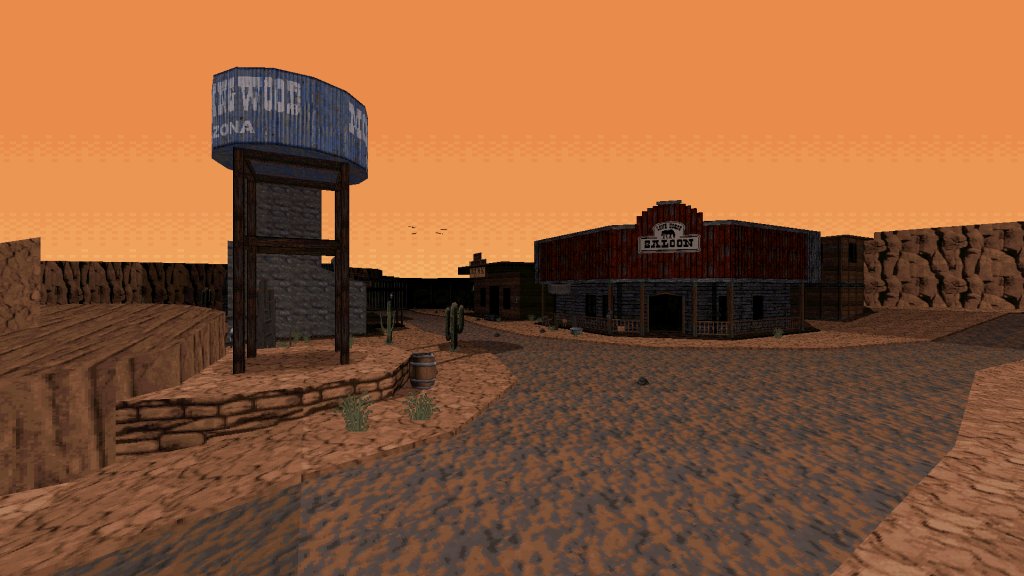 Compared to other levels in this pack, this one is more narrowly structured primarily taking place within the dark and long forgotten mine shafts, where upon the place has fallen into disarray and caverns are being submerged in lava. Another simple level aiming to get from one point to another, but does so by involving a small amount of backtracking and some other fun moments such as catching a ride on the mine carts flowing through a river of lava, running from death before it rolls down upon you and a simple crusher trap. These help to breath a little more life into things if only for a short while. Would have been nice to at least reward the player with a shortcut out of the room upon bypassing the crusher though. 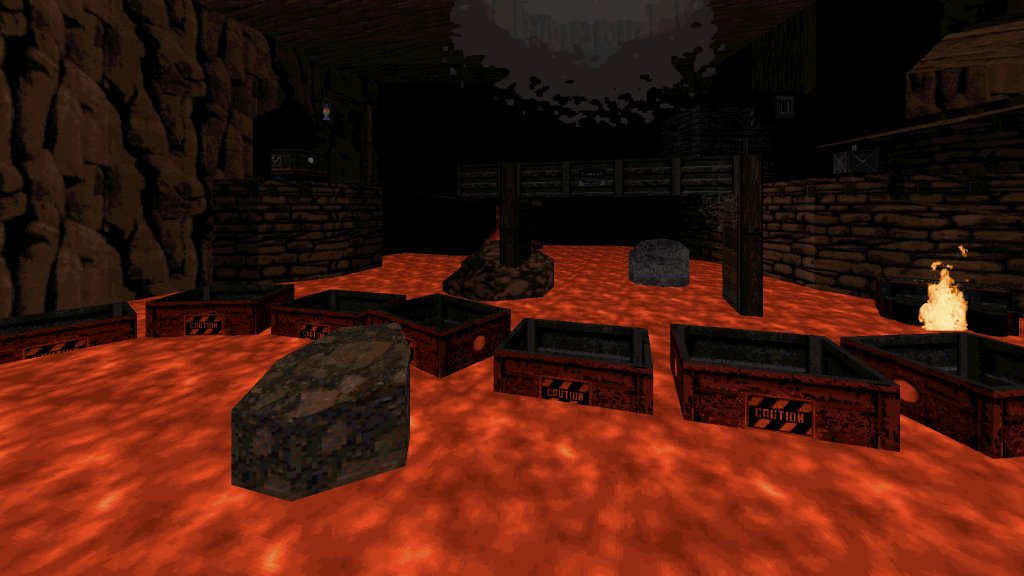 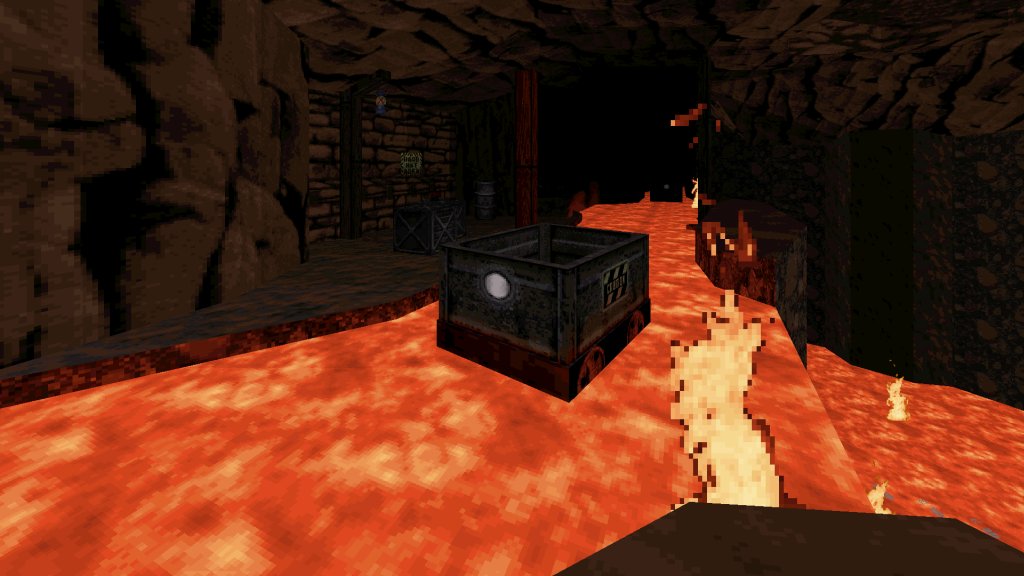 Did not enjoy the donkey ride during the early moment despite its intention to be a humorous homage to the trailers, but luckily doesn’t overstay its welcome. This level is otherwise my personal favourite amongst the bunch and definitely the strongest in terms of visual treats and enjoyment, providing a suitable environment for the finale. Well, almost. Progression has players fight all over the Dam setting ranging from the road, inside the guts of the large structure and into the lowest areas of the canyon while providing some degree of variety and other dynamics. The sense of scale is presented well with the visibility cranked up to reveal the amount of structural detail to replicate the style of the Hoover Dam and all its components. No doubt memorable. The final boss fight on the other hand was too easy to beat, his attacks should have been more relentless like the Cycloid and give the highway pillars more purpose to avoid his incoming fire. The ending was funny though. 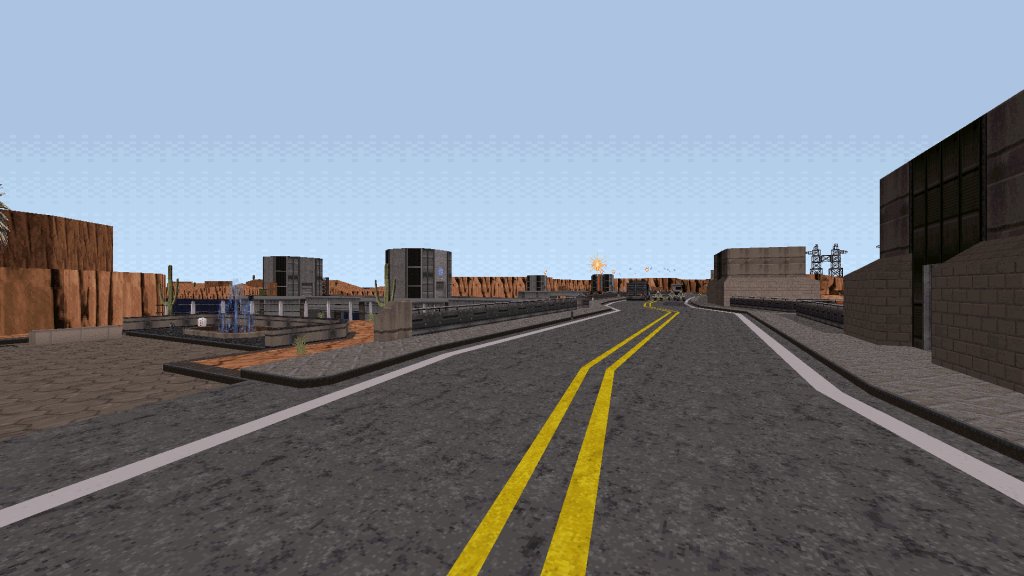 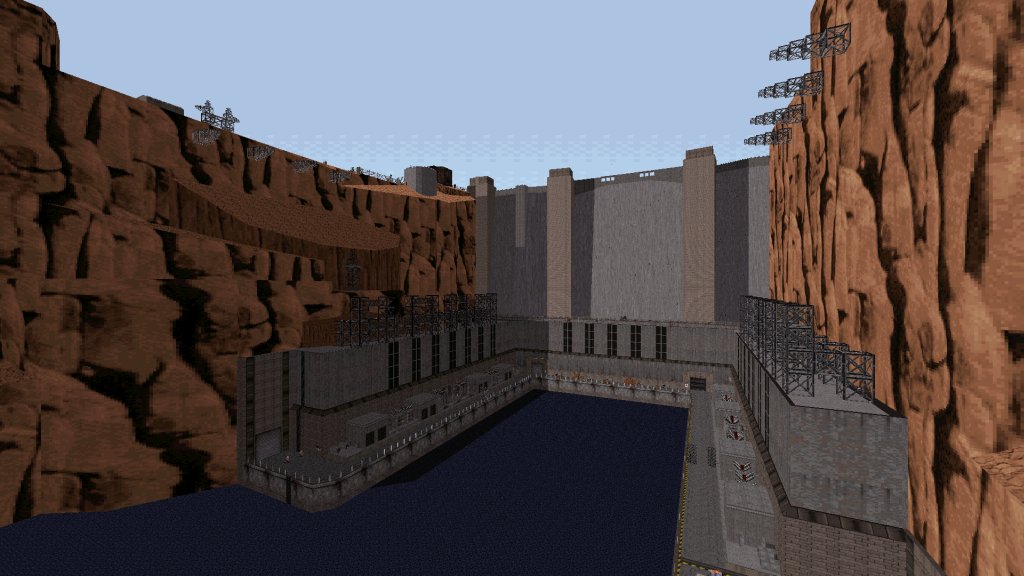 Does an excellent job concerning the design aspects, presenting impressive visuals through detailed levels, sprawling vistas and grand structures such as the Las Vegas cityscape and Hoover Dam, but does require much needed polishing to remove the blemishes across each map. Gameplay on the other hand has its high and low points with weak combat and some odd pacing. The focus on linear progression may also turn off some players. Still an enjoyable mod worth checking out for some eye candy.