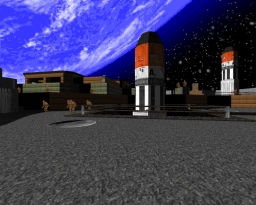 Introduction
The moon’s orbit has been slowed down due to a head on collision with a giant ball of demons, who have now taken over the surface and it’s bases. You must escape the moon before it crashes into the Earth!

Review
Lunatic is a five level episode which embarks the player through a journey on the moon’s surface and inside some of its high tech bases, doing battle against an army of demons once more. This set begins on a mild note to help settle in the player, but it won’t be long before the pacing changes and begins to throw in some tense combat overtime and introducing the tougher enemies early along the way. There is a decent amount of challenging scenarios about, usually done through the combination of both tight and open locations for these fights to take place in. It is usually the former of the two which can cause the biggest dent into your health, especially with the lack of cover in some of those areas, while a couple of Revenants will spawn nearby. The horde sizes do increase fairly quickly and this is especially evident during the finale which had to require several reloads in order for me to beat it. I noticed there wasn’t too much ammo handed out for the BFG here either, preventing any overuse of this weapon and being forced to rely on others. Hiding away in the niches are two new enemies, both of which are human grunt variants, one with the deadly plasma gun and the other using a rocket launcher with Revenant style projectiles. These two aren’t exactly tough and are no problem to tackle with, but they can be deadly when faced in numbers or during surprise ambushes. These two do work quite well as a weaker alternative to enemies with similar attacks and as a means to have a higher quantity of weaker foes. 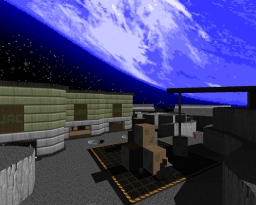 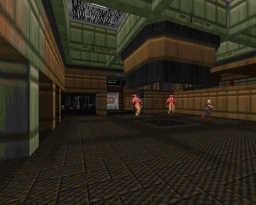 The space theme actually comes across well, the sky texture alone helps to achieve this majestic feeling toward the entire episode, walking around on the surface of the moon with the Earth staring right back at you. I usually don’t like to see Duke3D textures being used in Doom wads, mainly because of a difference in art style, but a considerable use of the moon rock texture has been put to good use here for the moon’s terrain. This along with natural rock shapes and the wide use of strong shadows prevents the outside from being underdetailed. Other additions to expand the scenery is the possibility to see beyond the tops at certain location or various views from windows the player will never reach making the world feel larger than it is. Being able to see things like the rocket from another part of the map is a nice touch to provide a sense of depth and scale. DeBruyne follows through the design of each map with a consistent style, which almost makes it appear to be a single large map, using minimalistic architecture, bold shapes and clean texturing. The majority of the journey takes place outdoors, but does occasionally finds its way indoors from time to time, including an entire two levels focused entirely inside some of the moonbases. I particulary liked how he had ensured that both had different visual schemes of design and texturing so that things stay refreshing. 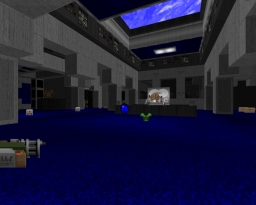 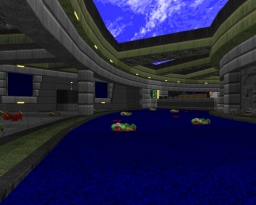 Conclusion
DeBruyne pieces together a consistently designed set of maps and approaches the moon and space theme fairly well. The focus on large hordes and a variety of indoor and outdoor combat offers a decent level of challenge and attempts to keep each map fresh to play.