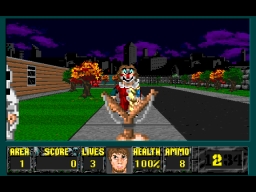 Introduction
Encountering some engine trouble, I took my car to an auto repair garage. I picked up a magazine in the waiting room and began to read it aloud to myself, a bad habit that tends to pop up, only to realise too late that it was actually the Necronomicon in disguise. The sky grew overcast and the streets became filled with denizens of evil, who immediately raid a local gun store. Overcome with guilt, I took to the street and bought a slingshot off a Trick or Treater to fix this problem.

Review
Ready those slingshots, because it is time for some trick or treating in the local neighbourhood. And I don’t mean the usual kind either. Instead of waiting patiently at the door, we’ll be breaking into several homes to grab all the ammo and soda that can be found, in order to survive against the denizens of evil that chase you down. They want you dead. Hallowolf is an experience that genuinely feels like an old school Halloween theme game, along with homages to some old ’80s horror movies for its choice of enemies. Even the Gremlins have managed to find their way inside here, and deadly to boot! One particular foe can be a pesky fellow, the bloody slime blob which never seems to know when it should stay dead. Its not so much of a problem in low numbers, but a royal pain in the butt during the boss fight. They do help to bring a little more depth and hazard though, despite how a big creepy clown should probably be enough to keep one up at night. The core visual style has an essence of old SNES games, along the lines of ‘Zombies Ate My Neighbours’, being colourful in appearance and a well mapped out suburban location. The second level however leans toward blood red catacombs of brick and rock with a tough boss battle just waiting around the corner. This mostly comes from being forced to keep an eye out for those blobs sneaking up from behind. 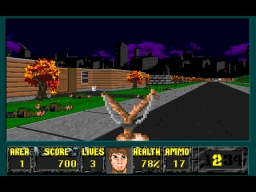 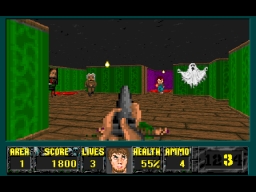 Conclusion
For a two level demo, it has perked my interest to see what becomes of this in the future. There is fun appeal for the visuals alone, solid and detailed mapping and some potentially tough combat.