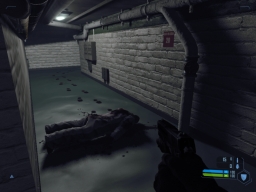 Introduction
You saw an article in your local newspaper, titled “Test Subjects Needed”, promising a small fortune for those who participate. Not wasting another second, you drove straight to the facility to speak with the people in charge. After a quick check-up, they were more than ready to do an in-depth analysis within their on-site medical facility. While following them, you eagerly anticipate what awaits you.

Review
Pretty much the entire experience of Lost Control takes place indoors, going for both horror and action orientated styles of gameplay. For a long while, the player will find themselves all alone, navigating the linear path within the facility to figure out what exactly is going on around here. There is definitely a good sense of this loneliness being conveyed throughout most of the first half, while avoiding the overuse of horror elements that will take place along the way, creating some tension and dread while roaming the halls for answers. These effects are put together well, often relying on visual cues more so than sound or hinting at the player with subtle details like blood and certain lighting effects. Several attempts to scare the player did catch me off guard, even at times when I felt something might happen only to find them pop up a moment sooner or later than expected. 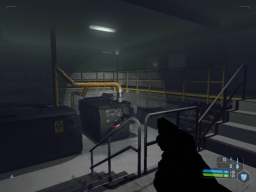 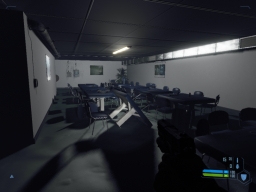 What the level tends to feel like however, is a mash of disjointed ideas simply thrown together. This not only emphasises part of the linearity, but also a lack of concept and coherency. Many of these ideas could have been further explored in a number of ways, yet has this effect of doing something once and then never to be seen again. The translucent creature in one room for example, would have been good to see more of those here and there. For some reason, there is also the sudden addition of hints given to the player by illuminating certain objects in red from the parking lot area and onwards. Layout also has a similar problem of incoherency by lacking a sense of place. This however may be less of an issue when one considers the nature of gameplay and how everything falls into place, it does work to show the character’s state of mind, especially in one particular scene close to the beginning. But another part of me doubts that most of this is intentional. 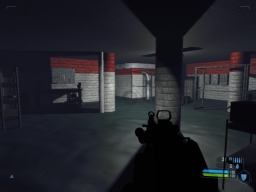 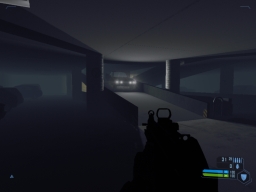 Eventually at some point in the map, the second half will slowly slip its way into a more action focused gameplay once the soldiers get introduced, along with the slow motion feature to help out in battle. These fights will happen fairly often, so by this point the horror elements will have toned down, but there will be times the player will come across some weird or even surreal things to make up for that. As far as the action goes, it is decent but not particularly special. Slow motion only makes it easier to cap a head shot, so I eventually chose to avoid using it. What may make these parts tricky though is the lack of armour, since this energy bar is instead used to indicate the timer for slow motion. Groups of enemies only come in short bursts, increasing in numbers but nothing too overwhelming to deal with. It would have been nice however to have allowed the two themes to blend together rather than be separate entities, and approach them much in the same way as in Monolith’s FEAR.

Conclusion
Primarily set indoors with one half focused on horror themes and the other half throws in some action. While some of the effects are neat, the level feels too much like a mash of ideas thrown together and not enough time spent on some of them.