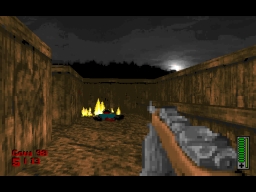 Introduction
Unsung is a standalone World War I adventure which lets you slog through pixelated trenches. Along the way as you fight through the German trenches as an Allied Trench Raider in an attempt to disable a crucial German Artillery Bunker, you had better watch out for machine gun nests, flamethrowers, poison gas and an army of soldiers out to kill you.

Review
While Unsung initially takes place within the trenches, it is nowhere near as dull as that may sound to some, since the mod doesn’t just stick to one location for too long. My first impressions were already high once I booted up the game, the tidy replacement title and menu graphics helped to present this as a polished project from the get go and kept my spirits high for what was to come. This same feeling remains once I got into the action and had a chance to roam around. Before jumping into the campaign, intermission screens have been used as a means for cutscenes to bring across the story and events that take place, while using a comic style with drawn characters and speech bubbles. This had a nice charm to it and is pretty consistent right the way through. As for the levels themselves, they are varied enough by focusing on a few core themes and approaches them fairly well by using a ton of custom assets from textures to decorative sprites. Each one will seamlessly link into the next level and follow a narrative flow, with some differences to the feel of gameplay. The addition of textured floors, ceilings and parallaxed skies helped to flesh out depth and give a better impression when you’re either indoors or out. The new graphics in general fit well, textures are detailed yet tidy and enemy sprites follow that same comic style like the intermission screens. 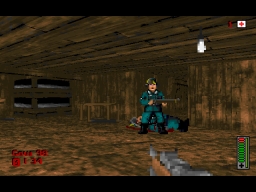 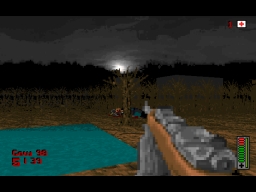 The trenches, as one would expect them to be, are a tight fit with little room to move, making it a difficult task for the player being forced to keep on their toes early on, especially when taking a peek around corners. Since there are several new additions and tweaks to give the overall experience a fresh change of pace, this starting level works very well to introduce these mechanics and for one to get used to them. There are new weapons, each with their own ammo and clip sizes, including the requirement to reload to push the player behind cover when the situation calls for it. The Gew 98 is a bolt action rifle, shooting one bullet at a time while only holding five per clip. It’s tricky to get used to and a missed shot may be hazardous, yet it will be the primary weapon you have for a long while. Health packs also work differently by carrying what you find and pressing a separate key to make use of them. There aren’t many of these packs to be found, so each shot counts while avoiding as much return fire as possible is vital for survival. Going back to the levels, the design throughout these trenches is generally high, where decorative sprites have been used wisely, with bedding and radios found inside of dug out rooms or even a mortar area outside in the wider spaces. 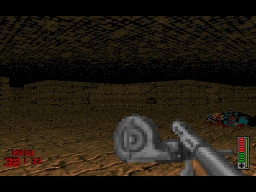 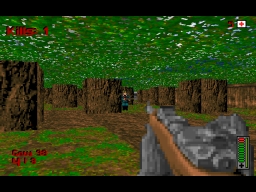 After leaving the trenches, the levels do eventually open out into the bunkers, with trucks, garages and storage areas along with other themes later on. The remaining parts of the second chapter took place within the woodlands which actually came out to be the most boring area to play through. Tree sprites have been scattered around in a fashion to create a maze like layout, but navigating this actually gets tiresome for various reasons. It’s hard to see where you can and cannot go, since at times it appears that you could squeeze through spaces, only to find you cannot. There was a point I saw a medkit and thought I made progress by reaching it only to find a dead end and had to resort back to tediously searching the area. In effect, this may put players off from continuing the mod. The rest of the experience picks up again from here and can be summed up with some nice ideas and contains a decent amount of challenge, action and good looking levels all round. Included in Unsung is an optional game mode accessed through the main menu called, Instant Action. This involves surviving against waves of enemies and racking up as many kills possible, while each milestone will reward you with ammo, guns and medkits to continue the parade a while longer. There’s five maps to choose from, three of which are maze-like, one which is very open and another called Chateau being my favourite for balance and a refreshing location not seen throughout the main campaign. This game mode works as intented and a good place to mess around with the weapons and themes a little longer after completing the campaign.

Conclusion
The take on a World War I setting works out by providing a variety of good looking level themes, from trenches to bunkers, woodlands and more. Offers a good amount of challenge and combat, while the new additions and tweaks to gameplay simply work well.