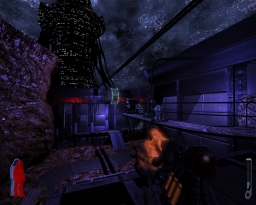 Introduction
This appears to be an alternate take on the storyline, where you will take the role of Tommy once again to infiltrate an alien ship and roam its metallic halls in order to find and resue Jen.

Review
Several gameplay elements during Prey have been utilised in small doses throughout Surprisingly Focused, offering gravity catwalks, gravity reversing, dealing with troublesome paranormal and a big fight on one of those miniature planets, while the occasional cutscene will play here and there on your journey to keep things interesting. While the design remains architecturally detailed, the texturing side does suffer a bit from either misalignment, stretched out or a few odd choices where a room can appear too busy on the eyes. However, all round the general design is good and does make a bigger improvement later on, including some neat coloured lighting such as a cold blue metallic room with red lights dotted around. Unfortunately, the combat does fall short at times. With the lack of death walk during much of the beginning, the player is forced to be careful and rely on the traditional method of quicksaving. However, a problem here lies in the lack of health in relation to the number of enemies, finding yourself too beat up to tackle the next fight and any that you do muster up will only allow an extra minute of life. Health is also an issue across the rest of the map and usually clumped together when it does exist instead of spread out wisely to aid in a fight. 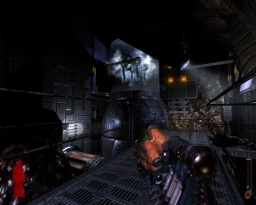 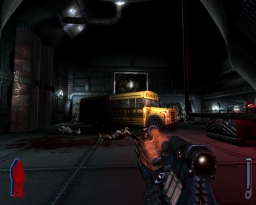 There is perhaps not enough breaks when the time calls for it, too many Hunters being used at one time and certain locations being far too open with with the abundance of sniping taking place. In a particular outdoor section, each few steps would call in several enemies after clearing the area once before and can get tedious to push onwards. This is also true upon entering portals, immediately being shot at from your blind spot where a two second breather would have made a huge difference in making combat more enjoyable. Progression and layout at times felt off, some points requiring certain terminals to be activated while making use of different GUIs we’re not used to seeing from the regular game, so they didn’t grab my attention for a while before checking each and every screen for something I missed. This isn’t a huge deal until the large outdoor section, where one such switch was used in such an odd manner. Took me quite a while to figure out the hiding spot for it. The flaw here is introducing new elements without getting the player used to them beforehand so they have an idea what to look out for, which otherwise could have stuck with familiar graphics to divert the attention toward them. More choices in weapons to play around with would have been nice, considering how quickly the Rifle will be depleted, which only to slows the action down to a crawl while you either wait for it to recharge or get a chance to grab some from a fallen foe. You can get your hands on the Spirit Bow partway through however, while helpful in some situations, I mostly had to resort on the Rifle most of the time. The Acid Sprayer doesn’t come until toward the end which would have been more useful earlier on, while a Leech Gun for the finale would have been perfect with energy nodes scattered around. In fact, with the large electrical conduct sparking away, some lighting nodes could have fit right at home around there. 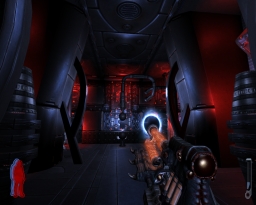 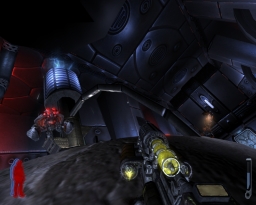 Conclusion
While I do cover several negative aspects, the faults mostly lie in the combat being too dry with little variation and a bit unfair. The map is still worth giving a spin and offers a good balance of different elements and good design.