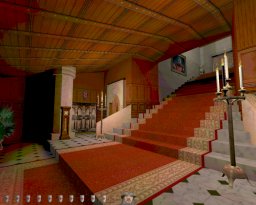 Introduction
Is it your habit to mock guards, calling them blind, deaf and stupid? You like to attack from behind, bashing their helpless heads with your blackjack? Hiding in the shadows, poking fun at them? Playing tricks? Is it your practice to pull loose keys and purses with a couple of hard-earned coins from their belts? Do you like to lock poor guards in the closets, to lure them into traps, to put their unconscious bodies on other people’s beds? Welcome to the world of fair play!

Review
I honestly didn’t know where I could have started writing about this hilarious mission without giving away too much of the surprises and hilarity to be had here. No longer do you take on the role of a sneaky thief in order to steal goods and precious artefacts, because this time the cards have been turned upside down and you must face one of the biggest challenges yet. Here you will take on the task to protect the Baron’s mansion as the only guard on duty from any intruders who have their eyes on his valuables and today is graduation day for the Thieves Guild. Luck just isn’t on your side. This is where you must be vigilant on your designated route and keep all eyes and ears open for anything suspicious and be prepared for those dirty tricks to be used on you. This mission sets itself up well for a humorous experience and plenty of laughs can be had here, parodying on the idea what it must feel like to be one of those guards, who have patroled one of the many mansions you’ve stolen from. The music choice in the main menu also fits perfectly to give a clear idea on the tone being presented here along with the other tracks you will come across. 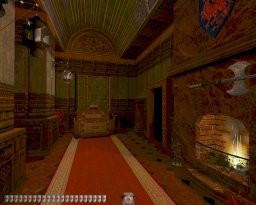 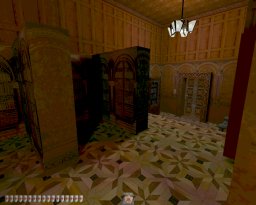 These thieves have not just come here to steal loot however. They want to make your job even harder and humiliate you as much as possible by trashing the mansion, spraying graffiti on the walls and moving furniture to places they shouldn’t be. Every time you revisit an area there is a high chance something is different. The results can be quite hilarious, it was always fun to run around hunting for the nearest thief to gut with my sword, only to stumble upon something new or realising what change has taken place. It really adds some dynamic feeling as if things are progressing onwards the longer you take. These thieves aren’t going to allow themselves to be caught so easily either and some of them may take certain actions if you startle them. One is to high tail it out of there to the nearest broken window in order to escape along with the loot they carry on their backs. The second choice is a fight to the death since these guys don’t seem to care about a bloody mess on the job. Occasionally some of them might decide to toss a flashbomb at your feet and find yourself greeted by a blinding white screen while they prepare to flee or take the chance at combat. That all depends on who gets the drop on who first though, it could so happen they’ll take a swift backstab from your hands instead. 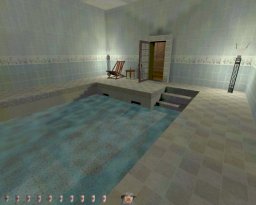 Your means of action can be approached in many ways and given the non-linear nature of the mansion’s layout, a variety of routes and hidden passages can be taken for whatever method you may have chosen to deal with the threat. This can include ideas like going all out with the sword or joining in on the enemy’s game and hiding in the shadows too. As such the mission can go in either direction. Saving as much of the Baron’s loot is the priority goal in order to succeed and even if the intruder manages to get their hands on some goods, you can reclaim it by grabbing the bags they carry around. If you honestly wanted to, you could leave it down to them to do the job for you and just take what they have found, or any other method of your choice. Perhaps even set your own challenges since there’s a fairly high amount of replay value to be had here. It would have been nice if the highest difficulty setting offered more goals to achieve and leave the first two as different loot requirements, though hardly a problem at all. The second goal is to remove all of the thieves lurking around the mansion, but completing this early can have it’s consequences by triggering the guard to relieve you before the loot goal has been achieved, so it’s best left until you feel ready to do it. There is no time limit throughout the thieving section so you can take as long as needed here. The only worry is answering the door in time, which will trigger a fail objective if you leave it too long. Though for that to happen, you’d have probably done ten laps around the mansion before the guard gives up. 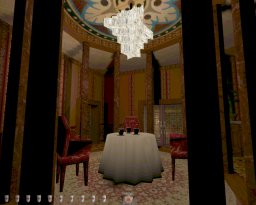 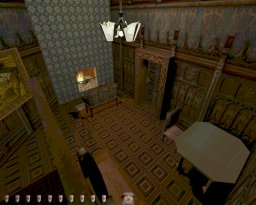 As far as the design for the manor goes, it consists of a rich appeal that would certainly attract thieves with the decision to break in and intrude. The manor has many rooms to explore, all of which connect to the surrounding corridors placed around the perimeter with nearby stairways to create an interconnected layout. The general size of these rooms are fairly small, but the thieves appeared to have no trouble navigating around. Texturing style remains consistent between areas despite differing in their looks, usually going for a blend of wood panel and wallpaper. Some areas also remain in an all wood style while using busy decoration in order to add that detailed, extravagant appeal. Zontik reuses a few assets from his previous mission, King’s Story, while the doors are the most noticeable pieces, they don’t feel too out of place and the mission still manages to create a look of its own. The lighting, when turned on of course, is kept well lit throughout many areas while a few places have a moody tone, mostly found in the smaller corridors and a few bedrooms. The overall richness of the design basically comes from how well everything blends together and helps to convey that feeling despite the stark contrast from Zontik’s last release.

Conclusion
By parodying on the idea of reversing the player’s role, you’ll be in for a humorous ride while doing something different for a change in the mean time, trying to save as much loot as possible and dealing with the thieving intruders than get in your way. Very creative mission with plenty of replay value.