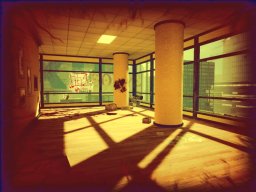 Introduction
You awaken inside of a high-rise apartment, covered in deep cuts and heavily bleeding. You don’t remember anything, not even your name. Blood is everywhere, staining the walls and floor. And it obviously not only yours. You need medical treatment as soon as possible, only then can you begin to understand what is going on in this nightmare.

Review
Comatose seems to be an experiment at creating something a little different and doing it with style, which comes across as a mix between a thriller and an ‘escape the room’ type of game. The mod however suffers from some problems and a disappointingly short length, which will be covered later in the review. The sense of this visual style is immediate from the introduction sequence, which gives you a simple outlook as to what the project is; the first part of a short episodic project. It also reveals the main setting, an apartment building with a person unconscious on the floor. You soon take control of this person as they awaken. There’s a catch though. You’re bleeding to death and it won’t take long before you completely run dry and it is vital to find a medkit as soon as possible. The majority of the mod takes place within this building as you solve puzzles trying to escape each room while limited by time as your health drops. This limit adds a sense of panic as you frantically explore the surroundings to figure out what to do. This can be prolonged by using the available painkillers scattered nearby, but it’s only a minor solution to your problems. Unfortunately, it’s easy to run into these accidentally not aware of their location, using up more than you intended. It’s very unlikely you’ll die often however considering there are plenty of these around and the puzzles themselves aren’t too difficult, but the danger gives the mod a nice twist. 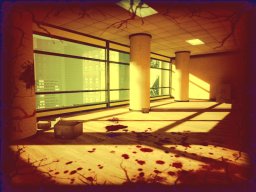 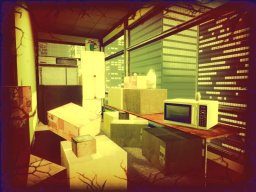 The visual style is an interesting touch to the mod, although rather subtle as a whole, it comes from its usage of yellow lighting and tones, along with the character’s panic emphasised through the bloodshot eye effect around the edges of the screen which remains for the first half. Construction of the apartment is relatively simple with hints of modern architecture through the use of the cylindrical pillars found in the main room. The view from the windows reveals a large cityscape, with an effective use of light shining through, the angle of the sun helps to cast shadows to make the room feel more detailed than it is. It’s only a shame that later areas compared to this look rather dull, simply there and not doing much, possibly caused by the bland lighting. As another form of detail, the apartment is littered with stacks of paint tubs and cardboard boxes, probably hinting at a recent move in and preparing to redecorate the place. But that kind of mess is nothing compared to the bloodstained walls and floor. This blood is also used as a mechanic to reveal how to complete the first puzzle while creating mystery as to who may have wrote it there, an aspect which continues along with other strange events as you pursue onwards. However, some problems soon start to kick in around the second puzzle.

The solution itself is actually simple and I wouldn’t really consider it much of a puzzle anyway and see it as an item hunt, but the issue lies in that the clue is easy to miss and will only add confusion with all the doors locked once again, with various boxes and bottles scattered around the room. The microwave stood out for me at first as a significant prop as it appears something can be done with it. Unfortunately not. You’re supposed to walk up to the window besides the door you’ve just came through to reveal a message about a missing handle. The position of the window is hard to notice and lacks any signs of a handle broken off. I also feel there is a wasted opportunity here, like causing the microwave to explode, allowing access to the outer edges instead. Another solution is to have an actual balcony and glass door with something to grab the player’s attention. I never personally had this problem, but it is possible for the object you require to accidentally get knocked somewhere and be impossible to retrieve. This will only frustrate players unaware of what they need to find. 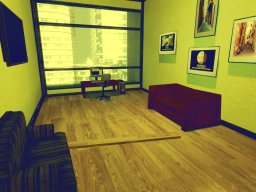 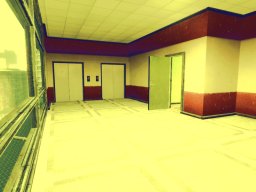 The second half once you’ve grabbed medical supplies is the easier section. Eventually you’ll be presented with a choice and depending on your actions, you will get one out of the two endings. What makes these sequences interesting is the use of drawings and a comic presentation as it shows a panel accompanied with sound and music. By the second panel though, my patience was wearing thin because of how slow each panel would scroll by and how they appear dark and grey, rather than lit up and easy to see. Comatose as a whole lacks some polish and almost appears to rush through the later parts, losing the appeal and puzzle elements it had started out with. Other problems also persist in various locations. For example, if you make the right jumps when walking along the edge of the building, you can gain access to the back areas and even below your position, offering nothing but places you shouldn’t be. Keys are hard to see being so small and a similar yellow tone as the environment. One particular key was hidden inside a dark room with no visible indication there was one here and much like the handle bar, this can easily be lost without realising it. The poor translation never helped matters during progression either, but to be fair to the author did the best he could. Luckily though, there is a fixed script available for download to replace the current version to improve things.

Conclusion
It’s good to experiment and the mod starts out well, only to lose that touch later on which causes it to suffer from problems concerning gameplay and misses out on some polish.