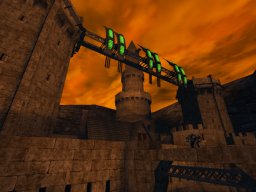 Introduction
Having battled your way through hell to reach this place, you are finally on the last leg of your journey. The enemy is omnipresent and unending, but you won’t let them stand in your way. One final task remains – one final step towards the start of a new revolution. The Last Fortress was released as part of and won the 2009 Unreal 8th Anniversary Speedmapping Competition

Review
One piece of advice when infiltrating a heavily armed fortress is to not underestimate the place, it can be brutal. This in ways sums up the level of defence the Skaarj have set up in this grand construction, where the use of enemies has been done in a way to constantly keep you on the edge. It’s rather difficult to settle in from the beginning despite having a large arsenal of weaponry given to you. Enemies are simply scattered all over the area and will stop at nothing to make sure you don’t get any further. The best element of all though is how dynamic it feels, always a different experience each time you play, never knowing where they’re going to pop up next. You’ve got to keep those eyes peeled around the environment, not only do they attack from ground level but above. Brutes like to hang around on the towers to rain rockets down upon you, troops hide behind windows with a sniper rifle ready and Skaarj do dare jumps from high places for a surprise attack. Sometimes enemies will like to take a swim, or perhaps that is just an excuse for falling in, allowing danger to be shot from below which in turn makes the edges a risk too. I’ve died many times, but in no way was the level frustrating and felt like a good challenge with plenty of health and ammo around to grab. And of course if you’re willing to explore, many hidden stashes await to be found. Even upon reloading a save game, the same scenario may not happen twice. Keeping on you toes for the unexpected adds a lot of variety to the action. Even Stone Titans lurk within these walls, although spending most of their time crushing other Skaarj, are another part of the defensive forces and it was nice of them to leave a message around revealing how many they’ve got with them. The only matter is where. 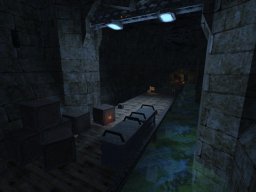 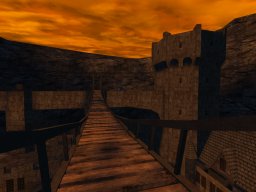 On your journey you will find blinking PDAs which have messages written by Dr. Morgan which set up both the location and the story. Following these will soon have you navigate deeper in the fortress and gradually climbing its walls, getting higher and higher as you progress. The messages will reveal what Dr. Morgan has been up to and soon becomes clear what you’re here to do. To get to the peak of the tower and finish what he started. This adds a nice flavour and purpose to what your doing. Finding where to climb is made easy through the use of chains, but the climbing aspect can have its faults, somewhat frustrating and took some time getting used to. Ascending and descending is done by looking up or down, while the movement keys will only cause trouble, so it’s best to get in a good position before heading up. It’s easy to fall down and even more dangerous when enemies decide to flank as you get part way up, always worth keeping a ear out for their presence. A new beast of a weapon is introduced early on in the level called the SK-6 Rocket Artillery Cannon, only to tease you first by giving it to several Behemoths. This only makes these enemies that much more dangerous as they can literally rain havoc down on you. The blasts are extremely deadly and the shrapnel bouncing around is painful. The sound of the explosion is satisfying, coming out loud and powerful. Eventually you will get to have one too and is a useful tool to wipe out a group with a single blast, only with the downside of slow reload times. The author seemed very generous though with the twenty rocket limit and plenty of ammo to grab for it. Occasionally a Skaarj will hold one of these too and can be even more fierce if you don’t blast him away as soon as you can, as they’re small targets from a distance. 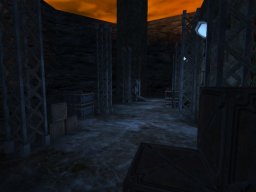 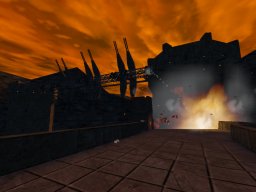 As already mentioned, the fortress is huge where the design goes for a grand scale over smaller details to make you feel insignificant to everything else. It’s visually appealing and still comes across as a real location, especially how various areas are utilised well for the gameplay. It is neat how you can see almost everything above you and how the central tower looms over everything else. Other elements also add so much like the Skaarj bridge connecting two smaller towers adding a contrast to the style, which hums noisy when you eventually get to walk across it. Lighting for the most part is very cold in the lower areas, mostly shrouded in shadow while the higher places get warm, orange sunlight. Shaded areas tend to be bland due to how flat it can cause structures to be, yet a little bit of lamplight improves these areas so much when used. Upon getting closer to the peak, it becomes more evident from the skybox about your current location, and looking down in awe to see what you were going through to get up here while a heavy wind rushes by. Using the sniper scope will also reveal many enemies still waiting in ambush for those fortunate not to dare challenge you. The ending sequence is a satisfying round off against a boss and some nice interaction with the skybox itself.

Conclusion
Makes excellent use of enemies and the dynamic gameplay provides challenging and brutal fights, unsure where they may attack from be it on ground level or above. Reaching the peak of the grand fortress works well for progression and is a visually pleasing experience as a whole.