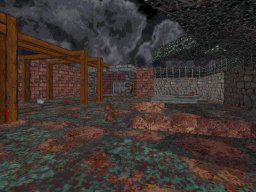 Introduction
You’re walking alone on a warm, summer’s night until you suddently fall into a deep hole. Nobody is with you and have fallen faint. Alone. When you finally awaken, its obvious there is no way back up. It’s time to find a way out.

Review
Fullmoon is a simple map which relies on a consistent key hunt between areas, each one having you spend a decent of time within a location before moving onto the next. I couldn’t help but feel that the gameplay felt a little like Doom in terms of progression and combat. Don’t expect there to be a lot of variety with the choice of enemies here, mostly consisting of cultists and zombies, an emphasis on the latter as hordes of them are constantly thrown at you. They start out in groups of a few, very quickly increasing in numbers as they hide behind walls lying in wait for a trigger to ambush you. Ironically this didn’t seem to get old and repetitive, instead adding a little something to the action quite nicely since not only are they easy to mow down with a good throw of dynamite, but interesting to prevent yourself to get caught up in their traps and avoiding the unfortunate. The cultists on the other hand are barely a problem, usually waiting behind a door some distance away making them easy targets. The ending closes off with a nice conclusion by adding in some akimbo weapon fun against a legion of zombies. 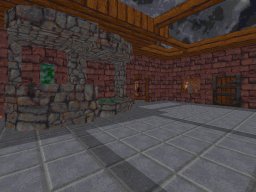 The level takes place inside of brickwork hallways with many instances of indoor and outdoor areas, the design is average but works out fine in the long run and appears to be a development of the mapper as they improve, trying out bigger rooms and different styles as shown by the residential location. The simple approach to detail goes for a series of similar looking areas and only occasionally stepping away from the texture scheme taking place, while some attempt has been made to break up the corridors by the use of wooden beams along walls and ceilings. Not everywhere looks the same, with some of the lower floors using more cobblestone and the exterior areas actually having some purpose like the gravestones. Layout consists of these hallways and small indoor and outdoor sections, but manages to be appealing enough to look at with simple shading effects to at least prevent the map looking monotonous. 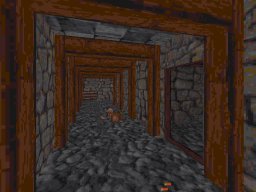 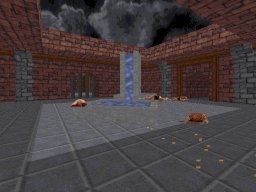 Conclusion
Comes across as a simple yet decent map, an enjoyable session while not exactly having varied gameplay and anything special in the design.