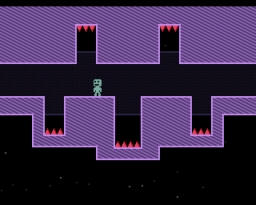 Introduction
Take role of the fearless leader, Captain Viridian as you find yourself seperated from your the crew during a quick evacuation when the ship becomes affected by a dimensional interference. It appears to be trapped in this alternate dimension and everyone has been scattered around this place. It is up to Captain Viridian to explore this strange world, locate his missing crew members and find out the cause of the dimensional interference.

The Review
Bought this title on a whim because of the praise I have seen and I generally love these neat little games with a retro visual style. The game starts off with a cutscene just before the accident takes place and soon enough you will get to take control. You can choose to rescue the crew members in any order you like, except for one who is found during the first zone, this is of course considering you know where to look for them. This is done by exiting the ship and exploring the surroundings for possible entrances into a new zone, the use of level titles at the bottom of the screen will help indicate you’ve reached one of these areas, or simply browse every corner of the world and see what you can find. The map screen is a useful feature and a huge part in finding out where you have and haven’t been, displaying the world as several boxes or blank spaces. Some of these boxes are highlighted in a specific colour, which will represent an important area, usually a zone. Teleporters are also scattered around the dimension which can be a quick way to warp back to the ship and from there to any of the other activated teleporters. 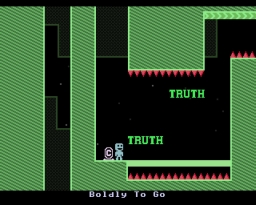 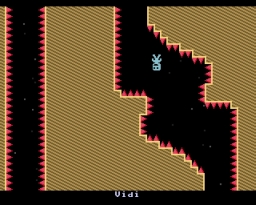 Unlike many other platformer games there isn’t a jumping feature. Instead you reverse your own gravity at the press of a button and uses this as the core mechanic for solving the challenges that await just ahead. This will involve general navigation throughout each zone, keeping clear of spikes, avoiding hazards and timing your flips to effectively get through an area in one piece. There is plenty of variety in the environment, with effects like moving platforms and convery belts, and an effect which only appears occasionally n some of the zones, where upon touching an edge of the screen will have the player appear on the opposite end, like a loop, creating some neat layouts and puzzles in some parts of the experience. It even gets pretty tricky once the screen scrolls upwards and find that being too slow or getting too far ahead of yourself will result in death, making your task that much more trickier to accomplish.

Some areas will require fast reflexes and good timing, but if rather fair about it. There will be many times that you’ve got to be quick, but they are possible to accomplish without being absolutely pixel perfect. Checkpoints are frequent, so even in the event of dying you’ll quickly respawn at the nearest one to continue, without going through areas you’ve already passed time and time again. I’ve died often trying to get through some of the harder sections and being able to get back into the action in a blink of an eye kept the fun factor balanced out. The difficulty works well, a fair mix of easy and harder challenges and I was always determined to get through the game no matter how many times I died. There is no doubt a feeling of achievement upon success either. I did notice that movement can be a little slippery which can have their negative effects on the experience, but not enough of an issue to be completely off putting. 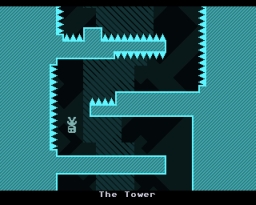 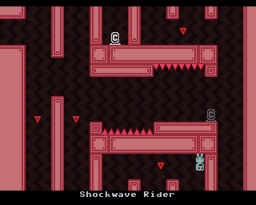 The visuals are an aspect that grabbed my attention, by using a simplistic, pixelated art direction and a minalistic approach to the level design. This clean style makes everything easy to point out as to what is part of the environment and where the hazards are located. Characters are also consistent in this simplistic style by only having a single frame of animation, which is simple a sad face emotion accompanied with a fitting sound effect in the event of cutscenes or death. Lots of other stylish choices too from the animated backgrounds, the unique designs for hazards such as a large words or an intentionally glitchy graphic. The generally fast paced progression works well here because the visuals are easy on the eye and there is little distraction getting in the way of enjoyment.

I really love the music created by Magnus Pålsson used throughout the game, done in a chiptune style. The soundtrack is varied and engaging adding a lot of fun appeal to the levels. There were times I’d have trouble with a specific area and decide to take a break from the game. It wasn’t long before I want to jump back due to the music getting stuck in my head and humming it aloud. No matter how many times I;d die, the music would keep me in the right mood to keep trying, the happy and fast paced rhythm working effectively with the gameplay. Pushing Onwards and Positive Force are excitable and happy little tracks and do as their titles suggest, pushing you onwards with a positive force. Potential for Anything and Predestined Fate are more foreboding tracks while retaining some form of an upbeat feeling, creating a mysterious air about the level they are used in only to emphasis the wierd stuff going on. Pressure Cooker is a techo tune, but an odd one as everytime I’d run through the level with it playing, it had almost seemed as if the hazards were moving at the same pace of the rhythm, bouncing up and down fitting with the feeling of the tune. That is probably just me. Passion for Exploring is a suitable track during your sight seeing, using a slow and calm pace to allow you to freely wander the world with no rush before finding a zone you wish to enter. I enjoyed the music enough that I purchased it from the musician’s website, links at the end of the review if you’re interested. 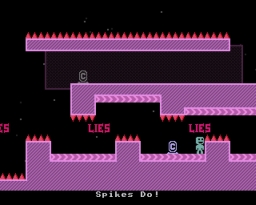 As for bonus stuff to do, there is plenty. One major element are the trinkets that you’ll find scattered around the world and within the zones themselves. There are twenty to collect and are completely optional to do, some are very easy to obtain while others are difficult. I still have nightmares about Veni Vidi Vici. There are additional modes of play to have a go at after completion, including a flip mode which will change the orientation of the levels to seem like a new experience. No death mode and time trials, which are self explanetory. A secret lab can even be unlocked once you’ve obtained all the trinkets. Here you can find a mini game which will time how long you can last on the Super Gravitron, but unlike the rest of the game, there is no pattern to follow and will be all up to your reflexes and skills. Another feature in the secret lab is an achievement room which keeps a record of everything you can do, offering challenges to earn a trophy that gets placed here.

Conclusion
Definitely a game that requires enough patience, quick reflexes and perseverance to get through and provides a good level of challenges and bonuses. The stylish pixalated and minimalistic level design is easy on the eyes and the chiptune soundtrack is good on the ears while keeping the fun factor high. I enjoyed the game immensely and honestly look forward to seeing what else Terry Cavanagh has in store.