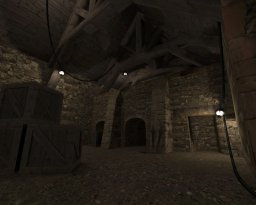 Introduction
It’s rare to see singleplayer map releases for this game and I thought Sock’s Edge of Forever would be one of the last for a very long while, so it’s nice to be greeted with something new to feast on and see what else has been presented, despite the limitations present in Quake 3 to do this. Lo Sota Olt was the only entry into ..::LvL’s Experimental Singleplayer Contest. It’s a bit of a shame that more interest wasn’t taken. Read on to see how it fares.

Review
The level has you dropping into a chasm after falling through a hole, luckily landing on some wooden boards on the way down. Here you’ll find a tunnel leading to some catacombs further within the cave. This location is given enough shape and height variety to make you feel like you’re underground, from the twisted run-down hallways that lead into much larger rooms with old wooden platforms, waterways and arched alcoves. A sense of age is given from the presence of abandoned shields shrewn about telling a story of how these tunnels were possibly used in the past. This is evident as your travels lead you to an industrial sector, with a contrast in style and colour. The usage of wiring and machines really set this apart but work well together to show a gap between time periods. 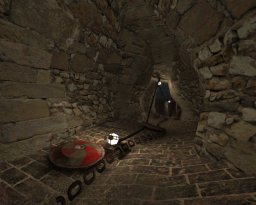 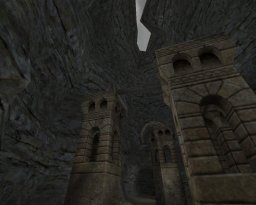 Although the level mostly presents you with some very simplistic puzzles which mostly result in pushing two nearby buttons to open a door, there were two highlights. One is the choice between two paths, both eventually linking up to the industrial sector while not allowing you to access the other path at any point. The typical route will lead to the button puzzles while the other a jumping puzzle. The latter can be frustrating to those not used to the movement in Quake 3 like me, especially considering one slip up will mean starting the sequence from scratch. The second highlight is the addition of a bot ensuring there’s a threat lurking about as you locate the switches to unlock the final door. Only problem is the Guardian is easy to avoid and tends to stick to the lift often, quite literally. The level is very short and I was at least hoping for a longer playtime in the industrial sector, pretty much ensuring a second playthrough right after completing it to try out the second route. 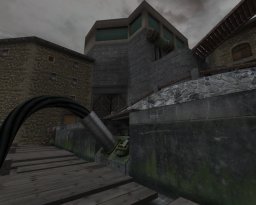 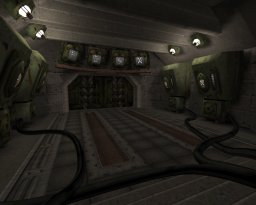 Conclusion
Another singleplayer experiment that is pretty successful with the addition of two paths and a bot, while simplistic in the puzzle area. Great design throughout as the contrast between the catacombs and industrial sector works to show a sense of age.