Plumbers Don’t Wear Ties (But They Do Carry Shotguns) 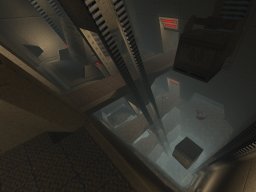 Introduction
The map title is a reference to the infamous game with the same name and sets itself up by following a really silly storyline. Plumber’s Don’t Wear Ties (But They Do Carry Shotguns) takes place within the walls of a large flooded Base themed map. The place is filled with many grunts from the standard shotgunners to the Quoth rocketlaunchers, that are just waiting to take you down.

Gameplay
You won’t be limited to exploring on foot in this one, since there is a lot of underwater sections to cover. The author made sure to add plenty of air pockets to catch a breath before you decide to take another dive. This combination between land and underwater areas worked effectively and didn’t become a fustrating experience. The path forward isn’t going to be strictly linear either, since you will find several locked doors which require switches and keys to unlock them. The level is connected up as a series of routes that eventually link up to previous areas, which adds an unlinear sense to the gameplay. As for the enemies, you’ll be facing yourself off against several grunt forces, with the occassional scrag and sentry bots. There’s a good selection of weaponry and supplies to keep at the map and there are even lot of secrets to look out for; the additional messages from them make each one special. The map ends with a boss fight, and probably one of the more interesting battles against this particular foe since there are optional ways to beat it and plenty of cover. 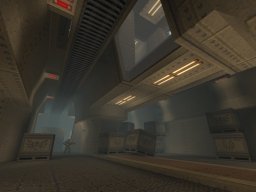 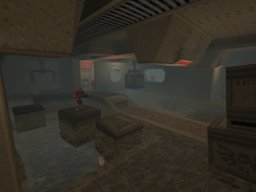 Design
I’ve always liked the colour choices from the Base theme in Quake from the mixture of tans and browns, which I honestly feel is more appealing than several doses of grey everywhere. This map does a good job at using that blend of colours well, while creating a very well pieced together level with the combination of neatly aligned trims, panels and even some windows teasing you with new areas to explore. The flooded areas help this map stand out and keeps the theme remaining fresh. It doesn’t even cop out on the detailing in these areas and still have specific locations like the rest of the map, my favourite being the tram with crates attached. Concerning crates, they are used pretty much everywhere in various storage rooms and never bothered me much. In combination with the water, the author adds a bit of variety by having some crates floating in the water. The lighting as a whole is nice and bright with nothing that really stands out being too dark. Transparent water really adds a nice tone to the map, being able to see what is below works wonders with the diagonal elevator shaft and the sense of fog with depth just completes the look. 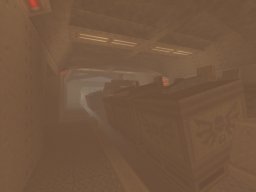 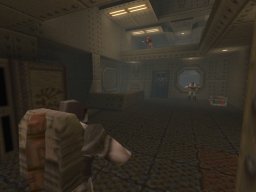 Conclusion
Possibly one of the most enjoyable Base maps I’ve played since Subterranean Siege. Exploring the level with the combination of underwater locations adds a nice touch to gameplay. The level feels unlinear and the level design is crafted well evident from the brilliant texturing.