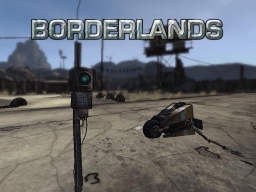 Introduction
You take the role of one out of four classes to embark on a journey to find the mysterious Alien Vault on the harsh planet of Pandora. With up to 4-player co-op support, travel across the land completing various quests, looting all kinds of weapons and gear, while fighting against the inhabitants to survive. How did I feel about this game as a whole? Find out after the jump.

The Review
Borderlands is a game that doesn’t take itself too seriously and creates a role-playing-shooter along those very lines. Your primary source of weapons are the various firearms that are scattered all over Pandora. You’ll be fighting against the planets creatures and bandits to gain experience points to level up. The stat points you receive can be spent to push your character toward a specific path, each with their own advantages to flesh out your character. Not happy with the results? These points can be reset at any point using a New-U terminal, for a cost, to reassign as you please.

I started this game with no major expectations since I was never really following up on it prior to release, buying it based from other players’ positive responses. As the introduction cutscene played out, I watched as a Skag jumps out onto the road and getting itself ran over. I could instantly sense the humour from this scene as it sticks to the front of the bus before introducing each of the characters. There are four classes to pick from, Mordecai; Hunter, Lilith; Siren, Roland; Soldier and Brick; Berserker. Pretty much your typical set of characters for a role playing game and it works well, each with specific traits of their own. I chose Lilith and this proved later to be a good choice, from her higher elemental perks and useful action skill. 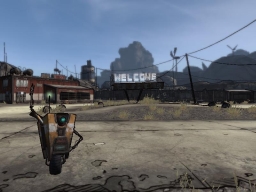 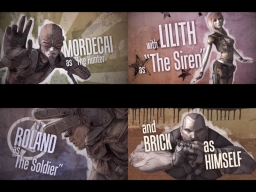 After getting off the bus, you’ll be contacted by a mysterious woman concerning the Vault. She will be your guide and attempt to contact you at various occassions during the story. The start gives you a small tutorial to focus on the key elements of Borderlands, from general movement to fighting mechanics. This is soon followed by taking part in quests. These can either follow the storyline or be optional ones from bounty boards or anyone who has a job for you. Though I have a negative feeling towards how these quests always direct you where to go with a marker, which always felt like I was being held by the hand. I always prefered the way quests are handled in The Elder Scrolls III: Morrowind. You get enough details to give you an idea where to go and how to complete them, but they rarely ever gave you an exact marking and forced you to actually solve them yourself, much unlike its sequel and this game. It always bothered me.

From the start of the game, it really looked promising for what might be coming up later on. The general tone is humourous with silly quotes from the enemies like; “Nobody shoots my buddy, except me!”. The game also graphically looked decent with its cel-shaded visual style. Both of these aspects make for a refreshing change. From the way in which you interact with the world, it soon becomes obvious what is what very quickly. Toilets, trash piles, lockers and green chests contain ammo and cash, while the wider red or white chests contain random weapon loot. And the three different types of vending machines available have a clear design to know exactly what stuff they each sell. Everytime you start the game, all these will be once again refilled with random items and loot. 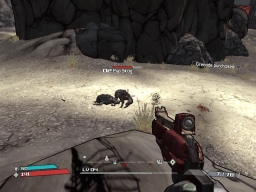 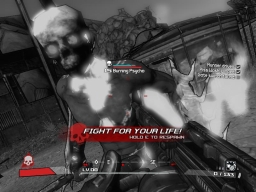 Around Pandora you will find a huge collection of weapons across different types. You have the usual pistols, shotguns and automatics along with sniper rifles and even rocker launchers. Some can be useless or simple gimmicks, others are things you really wish you had inventory space for (which can be increased thankfully). Not only are there different types but also elemental weapons which have effects like fire and shock. Sometimes there are special weapons with a specific ability, like an ammo regenerating revolver or a crazy shotgun that can launch your friends far distances.

The game isn’t just limited to firearms. There are different shields you can grab and they may also have their own effects. I usually stuck with the higher capacity shields with some form of health regeneration. Class mods later become available to you which give you benefits that other items do not, and generally work better when playing in co-op. There are also grenade mods, a choice in how your grenades behave and can change this at anytime. From explosive bouncing betties to incendiary stickies or tranfusion health leeching mayhem. And finally there is your action skill which works differently depending on the class you chose and can also have different effects from the usage of class mods, artifacts and skill points. Lilith’s phasewalk was especially useful for covering large distances on foot and escaping dire situations in need of health. 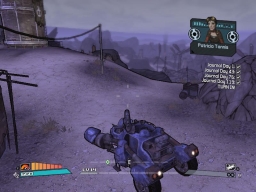 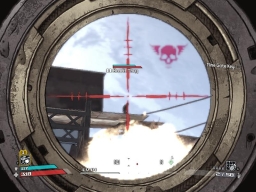 Exploring the world and fighting enemies during the early stages in the game was enjoyable. The background music fits the theme and style of the game, creating a laidback and calm atmosphere across the world, but after a while a lot of these tracks became bland and I thought the tunes had something missing to prevent that from happening. The levels themselves are fairly large and the enemies you fight against depend where you are. It was always nice to see an enemy bleed numbers and their head explode from a critical hit kill. The further into the game you get, the more enemies you’ll tackle against and sometimes even bombarded to change your strategy a bit. But it remains the same as the other battles against humans by shooting them in the head as anywhere else is mostly pointless. The creatures however have different weak points, the Spiderants being the more interesting foes. They’re generally weaker but there are more of them to fight at a time.

From time to time you’ll come across Badass enemies which are much stronger versions of that enemy type and take more hits to put down. There are also a few sub-bosses and main bosses during specific quests, but as a whole they are easier to beat than against the waves of enemies. There will be a time you’ll probably mess up and get yourself killed, which generally results in you being incapacitated. Before you bleed to death, if you kill an enemy in that time you will get a second chance to continue where you fell. Otherwise, you’ll be sent back to the nearest New-U station and ressurected for a cost; which gets very high during later stages. 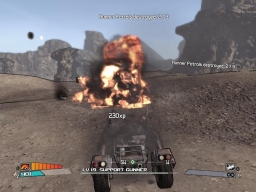 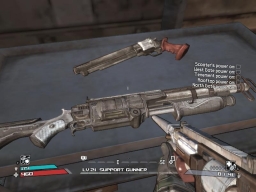 Exploration as a whole however doesn’t offer much unless you’re looking for supplies and extra weapons to loot, but this can be disappointing when you come across useless weapons. There are vehicles to drive around and get to destinations quicker than you would on foot, while running over enemies with a satisfying squish sound. I quite liked the control scheme for driving here and I’m generally not a player who likes vehicles in first-person-shooters. Turning the vehicle by pointing the mouse in the direction you wish to go was a nice choice and helped prevent having to align your view all the time.

Co-operative mode works very simply and I never had any problems joining a game with a friend. The only hassle that I had to deal with was registering for a Gamespy account in order to join a co-op game. The other is patching, since my friend uses the Steam version while I had retail, so of course his game would update before me; but these are honestly minor nitpicks and it was smooth for me otherwise. I will mention however, that I have read that some people had issues getting this to work properly. In this mode, you play through the game as you normally would in singleplay with a few differences. Assuming you’re all currently doing the same quest as the host, in whatever way you progress or the stuff you find will always be brought over to your singleplayer game. This means you can work at the game together and complete the same quests and be able to continue solo if you wished to. Enemies also get more tougher the more players you have and you’ll find an increase in the amount of Badass enemies to slaughter. If you love co-operative modes, this is definitely a game that has it all. 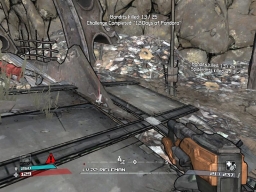 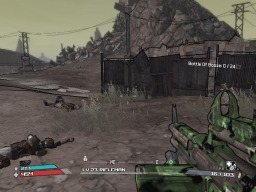 Although the game started out fun and fresh, as I got further in things started to look down. Before I get onto that there is one area that disturbed me the most. The field of view. I’m generally fine when I play games and other first person shooters and can do so for hours with no problems. Borderlands was a different story. I got motion sickness and this caused really bad headaches too. This was all due to the very low field of view. There is a small hack to set it to a more comfortable 90, but it rarely ever stays as it gets reset when you run or enter a vehicle. It did feel better than the default though.

Where this fell short was the lack of variety in different aspects of the game. Level design mostly remains similar throughout with the same barren wastelands, shanty towns, and bandit camps. When you’ve seen one scrap metal structure, you’d seen them all. Also the case with the enemies, more so with the same looking bandits over and over again, or fighting against Skags or Spiderants all the time. Soon enough the gameplay gets mundance, exploration becomes pointless and the quests become dull. I was getting bored with Borderlands. 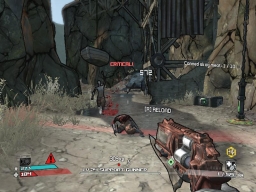 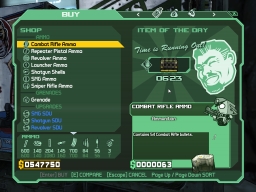 Once I reached the Salt Flats, I thought the game was picking up again. Especially from the way in which the level looked with the hazy atmosphere that made the visuals look refreshing. But this didn’t really last long and I couldn’t wait to get the game over and done with. I didn’t even check out Playthrough 2; which lets you replay the game as your character with tougher enemies and more rare loot. I realised that this game isn’t for me. It’s repetitive and got stale quickly. Of course, I love games like Quake and Painkiller which are generally about you shooting everything in sight. What made these better for me is that the levels and enemy types had a lot more variety. The only time I actually got bored with Painkiller was during the military levels for looking too much the same.

Conclusion
Is Borderlands a bad game? No, I don’t think so. But it wasn’t really a fun game for me as a whole. There was some enjoyment at the start and small instances where it would brighten up, but this rarely lasted. Borderlands is more of a shooter for those who don’t mind the lack of variety and just want to shoot everything they see. Otherwise the game won’t be your cup of tea.