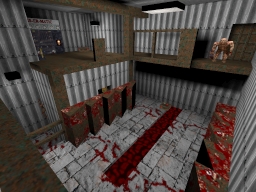 Introduction
To kick off the countdown to halloween, I’ll be starting off with something a little mild and slowly take it from there. Here we have The Slaughterhouse where you have decided to break into this facility for no particular reason, and must fight your way back out. Released back in ’97 by Neil Manke, this is a gem worth checking out, lots of blood and bloodstained walls await you where creatures are slaughtered for their meat.

Gameplay
The Slaughterhouse is a fair challenge, you main opponents being Grunts, Elite Guards and Orges in close quarter battles. Other enemies make appearances, but your main concern is against the three aforementioned ones that can be a hassle. Though the ammo and health balance is good. Each location is small, so grenades will more than likely be trickier to avoid. The map also includes some interesting ideas, such as the ability to interact with the machines so you can slaughter some meat yourself. Though, be warned, some buttons may cause you to get stuck, an unfortunate bug, but easily avoided by saving a lot, or by using noclip. Crucified zombies will also give you hints to various stuff, so its worth getting close to gain their words of wisdom. The map is enjoyable to play through, it can be fun to explore, with few surprises here and there. 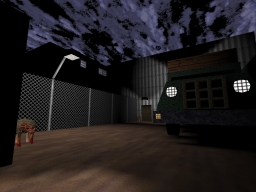 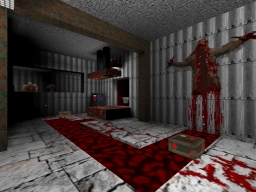 Design
Despite the map dating back several years, the design is actually still pretty solid in most cases. It can definitely be pretty simplistic at times, but it creates a theme quite well with the geometry and neat texture usage. The level generally consists with white walls, brown metal and red blood which is consistently used throughout. The blood contrasts quite well against the white, and creates a good stained wall or floor effect. Pools of blood, machines covered in guts and the stains really bring the feeling that you are inside a slaughterhouse. The facility also includes a few other locations, such as the blast freezer where you can find frozen Shamblers or the office space above. Lighting is bright in most locations, while only a few areas are actually dark. There isn’t many exterior locations beside the start and the end, which some neatly constructed vehicles. 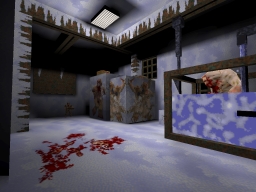 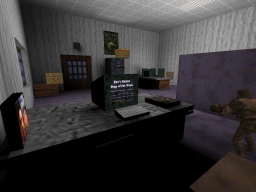 Conclusion
Although dating back to 1997, the map is still a solid experience including interactivity with the machines, some nice design with a consistent choice of textures and colour theme.