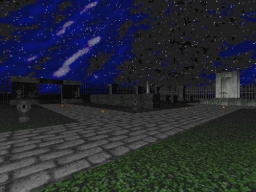 Introduction
Burial Ground from ’00 is the second review for the countdown to halloween, this time we’re exploring ghosts, ghouls and demons within a large, dark graveyard. You’ve been lost in the forest for days. In the middle of the night you awaken to weird sounds coming from the distance. You douse your campfire and head toward the sounds to investigate. You’re greeted by a craggy gate and moonlit headstones. You hear a slight rustling, then the silence is broken by the sound of heavy footsteps coming toward you. Looks like you won’t be getting much sleep tonight.

Gameplay
Burial Ground is a fairly large and open map, but the gameplay isn’t exactly unlinear nor is it very complex to begin with. Nothing wrong with that though of course. You’ll start off within a small graveyard area, eventually unlocking a side gate into the deeper locations of the burial ground which hold various buildings locked by keys. One minor nitpick I have to make is that one key is located in a location you would typically see as a secret location, so keep your eyes peeled and check your automap a lot. Progression is steady, upon finding key you enter the designated building and clear out several enemies, to find another within. Switches can also be slightly hidden at times, so if you find yourself stuck as to how to continue onwards from an area you just entered, always check corners and so forth. The map isn’t very hard, infact due to the openess the fights can be quite easy overall. To encounter this, the author has made use of projectile based ghostly Golems and Fire Gargoyles. Interior locations, or generally those with a tighter space, you’ll find the tougher beasts to fight with. This flow keeps the flow enjoyable as well. You shouldn’t have any problems with health and supplies, as the level is pretty much stacked with them. Especially for the crossbow.

Note: To load up the level, you’ll have to type in the console “map e1m6” without the quotes. 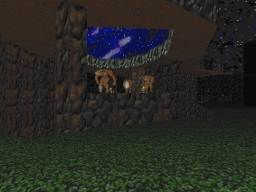 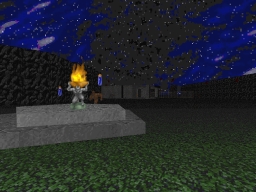 Design
The map may be large, but it doesn’t go underdetailed either. The starting location shows off enough where this level points towards, some good and tidy geometry and really good texture work. The outer fencing with blocks between to break up the flow works well, and creates a nice graveyard set piece. The rest of the map pretty much follows this pattern, including the interiors. The blend between good level structure and clean texture and colour usage creates a solid design overall. Lighting uses a dark ambience, but bright enough for gameplay and helps with the theme of a burial ground. Another note I’d like to make is the blue sky above and green grass below seem to add a nice contrast against the brown and greys for the surrounding buildings and structures. 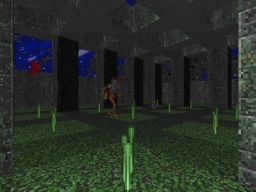 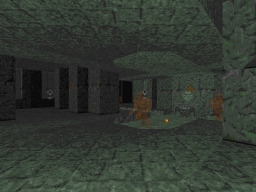 Conclusion
The map is large and open, but keeps a straight forward gameplay. Nothing particullary difficult, remains fun and includes some solid, detailed design.