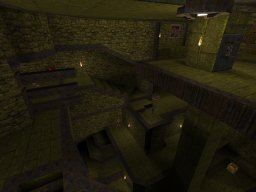 Introduction
You’re alone and hungry. Very hungry. But hope soon overwhelms you as a tower upon the peak in the distance slowly becomes visible. Getting closer reveals the tower is inhabitant by various creatures, but you don’t care. You hope to find something to eat there and continue your journey. Avoiding the slime, you make way into a small cave area that sections itself from the base of the tower hoping to gain access from here. The only way now, is forward.

Gameplay
Moldy Tower is generally focused on a much more slower paced style of action throughout the map. This will mostly include small skirmishes within the many sections of the tower against the various medieval knight enemies, including those from Quoth which play quite well with the vertical approach to the map. A majority of areas where you fight are for the most part, small and sometimes thin, suitable for the small enemy counts that adds a claustrophobic touch. What really makes this one stand out however is the atmosphere, which is emphasised by the new sound effects which are an excellent addition as you really feel like you’re inside a working tower. This is further improved by some visual details from the usage of large gears, which work as one would expect them upon using the large elevator; this really increased the immersion. Ladders are also used quite well, adding a refreshing change from lifts to reach higher levels of the map. The pacing pretty much remains the same throughout the map and the gameplay is straight forward. Enemy count will have a slight increase as you progress up until the final section of the map. Ammo and health ratio is good, since there is more than enough scattered around the level, along with a small arsenal of weapon choice, and the author resorts to the smaller packs of health as not to give too much away. 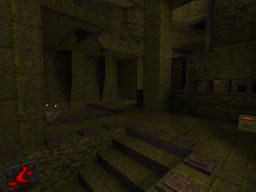 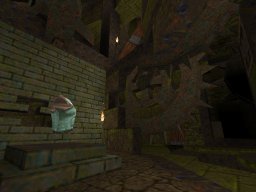 Design
The tower has three noticeably different schemes of design throughout the map, the bottom, middle and top. As you start from the bottom after emerging out of the cave, you’ll find yourself in the lower sections of the tower, using a lot of green brick and brown metallic trim textures. Design is pretty much confined within a small space but looks great as a whole, adding to the dark ambience emphasised by the sound effects. The middle section walks away from the green, and approaches more tones of brown with a rather clean ambience surrounding the place. Between these two parts, the design surprisingly remains consistent which is further enhanced from the many small pieces of additional detail added to the overall structure, from the metallic bars, arched walls in the lower sections, the light decorations and general disrepair from the tower. This even allows and interesting touch of sunlight shining through the small little holes in the walls and ceiling. Lighting for the most part is done well, the lower sections are more darker using a lot of torches, while the middle is slightly brighter from the usage of electric lamps along the walls. The top of the tower is different from the rest, since it takes place outside, with a rather grand exterior; soaring towers and lingering bridges between, with a large ocean of slime from the depths below. Visually it looks great, accompanied by a neat looking skybox to add that finishing touch to the environment. Screenshots honestly don’t do this map any justice. 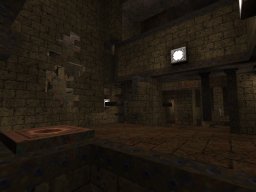 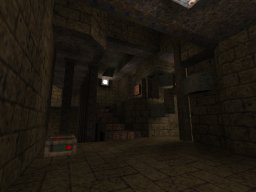 Conclusion
Slower paced gameplay with a great atmosphere, further enhanced from the new sound effects and other neat elements, such as the working cogs. This alone deserving of a special award for standing out. Design is good, consistent and works very well throughout.