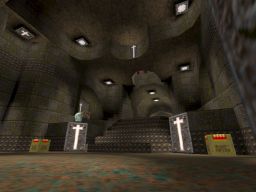 Introduction
Penile Devasation is a medium lengthed, action packed map from ’01 by Robert P. Gove Jr taking on a very metallic and runic theme through it’s many wide corridors, where various Knights and Ogres await you – if the title hasn’t already scared you off!

Gameplay
The level starts out with a fair and simple flow, fighting against the few Knights and odd Ogre, while slowly picking up by throwing a few more enemies at you each time you progress. The level itself isn’t exactly too much of a challenge and supplies are more than enough throughout the map. Rooms are generally large enough and corridors wide to avoid enemies, but Ogres can still place there grenade shots to catch you off guard when backing away from Knights. The final location however has a neat battle against various foes that come leaping out from the surrounding wind tunnels, being the more action packed part of the level. 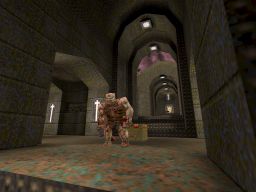 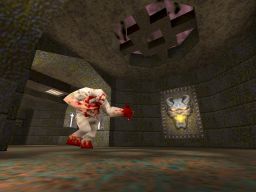 Design
The level essentially sticks to its metallic, runic theme throughout the entire experience, keeping an overall consistent and solid design. The texture choices work and blend perfectly, especially amongst the many high arched ceilings in various large locations. The small exterior location also adds a rather nice piece of contrast and would have been nice to have seen more of this in other locations. Lighting is pretty much very well lit from start to finish, yet the combination of textures still have an eerie look remaining. 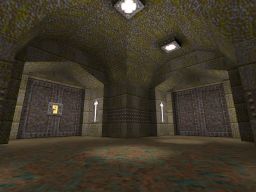 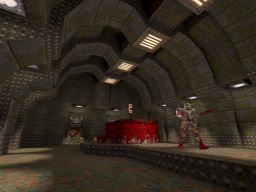 Conclusion
Consistent and solid, metallic and runic design with some decent gameplay which gradually gets more action packed.