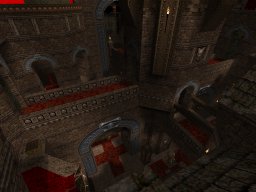 Introduction
Red 777 by Kell, released in ’05 makes use of the medieval creature set from Quoth within a large scale, fortress with a very old library aspect, in an elaborate brown and red colour scheme.

Gameplay
Getting straight into the course, Red 777 is a rather pleasant, action packed experience that really makes good use of the medieval creatures from both the default and Quoth assets, crafting and all round challenging map to play. Everything ganerally starts out at a rather slow pace, but quickly gets tougher as the enemy count increases and stronger foes are lunged at you. Combat mostly takes place within medium sized corridors, or fairly large rooms with plenty of corners and bends to straft between. Good mix between enemy elevations are spread out fairly well, including some nice fights with the gargoyles and scrags. Objectives will include finding and pushing various switches to open the way to further your progress, all while dealing with enemy respawns and a very epic final battle toward the end. 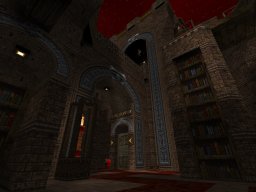 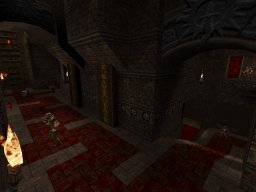 Design
The map takes place in what appears to be a large fortress, using a very appealing brown and red colour scheme. The general theme however seems to be that of an old library storing old texts throughout the structure. The choice of colours works exceptionally well here, and remain consistent throughout the entire map, even including the skybox. Construction is great considering the tall and grand appeal of the level, consisting of arches and large bookshelves. Other interesting aspects include the ceiling reliefs that enhance the rich, mood of the surrounding locations. 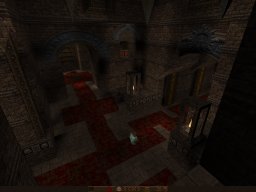 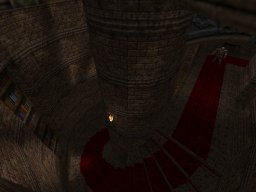