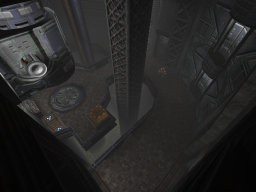 Introduction
Tiny Science Fiction style level, some tight non-combat areas as well as some larger set pieces. Started merely as a lighting testbed, but was encouraged to expand and complete by certain of the ‘func_’ crew. In the end, one tester thought it was just right, two thought it hard but fair, and one thought it an abomination.

Gameplay
Let me put it straight, this can be a difficult ride which only gets more challenging depending on the skill level you play at. The higher the difficulty the more usage of the Quoth enemy base is used, as well as other differences. I would personally recommend this level more towards experienced players looking for a challenge, however it can still be enjoyed fairly well on a lower skill level. Now that is out of the way, the level is very action packed. Most of the wider locations will have bigger fights, while the tighter areas won’t be too much of a threat to the player. There are some odd instances in which you will find yourself fighting a Shambler in a small corridor lacking cover, but it’s deffinitely not impossible where health and ammo can sometimes be plentiful or lacking in some areas. Another additional bonus to the map are secret locations where you can find some extra supplies to help you on your journey. The basic premise of the map is to locate the keys and escape the facility. 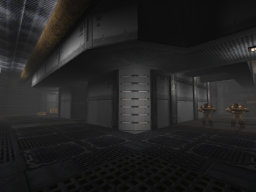 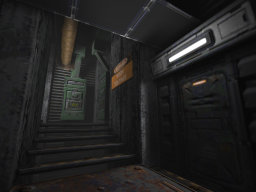 Design
Quite different than the usual high tech base maps making use of textures found straight out of Doom 3 and used fairly well throughout the level. Although they may look badly converted, they work effectly around in each of the locations fitting with the structure of the level. Lighting and atmosphere throughout the level is also quite atmospheric with a very lonely feel about it, and done rather well. Some areas seem to have a few problems with the fps dropping which you may or may not encounter. Basically the design has been done well and looks very detailed through out without cluttering the areas up too much. 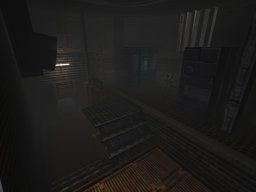 Conclusion
Actioned packed, yet very challenging expierence depending on the skill. Great design and decent usage of the textures throughout an atmospheric level.