Day of the Lords 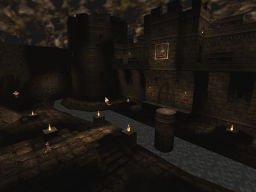 Introduction
Mission Briefing: The all-conquering forces of Quake have overrun the ancient castle of Arkiam, and secreted the four runes of Maakeckkehhhs in its towers. Your mission is to recover the runes and clear out the castle by whatever means necessary. Make this the final, Day of the Lords.

This is a largely scaled level that takes place within a huge castle, including a ground floor, upper level and lower levels for the player to navigate through.

Gameplay
The objective is simply to locate and take four runes for you to be able to complete the level, with several battles and small traps throughout. Basically, it’s an enjoyable level which gets a lot more difficult later one, especially as you get closer to the end. However, one major problem during the begining is that ammo supplies are very limited and may find yourself running out quite often. I’ve replayed this level several times, and each time, I still lack ammo. Health supplies aren’t too much of a proplem though. The battles themselves, lack of ammo aside, can be enjoyable and nothing too difficult during the first half of the map. The general flow of the level trying to find all the runes is also fairly simple to achieve and shouldn’t be too much of a problem to players. 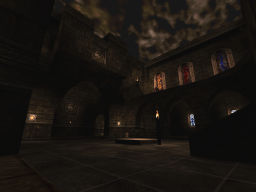 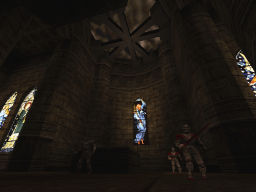 Design
The level is set within a large castle that contains a ground floor, upper levels and some lower chambers and sewers. Scale is a major part of this level, with some quite large looking locations and sections throughout each of the areas. Although big, they’re detailed enough and look quite well structured and this helps a lot with the bigger fights that take place. Lighting is a quite medium, with some fairly lit places, while others are also fairly dim. Other details such as the huge stain glass windows really help add a nice contrast to the castle, while emphasising it’s grand scale compared to the player and enemies within it. 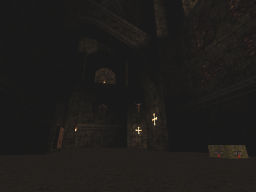 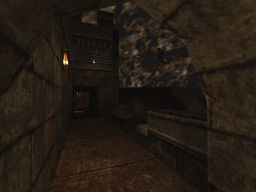 Conclusion
Largely scaled, fairly well detailed and lit level with some great design throughout. Some rather enjoyable gameplay, however the ammo supplies are rather lacking.