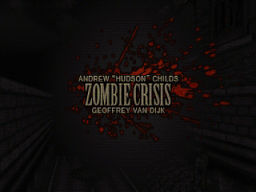 Oh my god, they’re everywhere! Those rotten, flesh eating, living dead walk the streets causing havoc and mayhem in their path! Oh the horror! You’ll literally be drowning in guts after the first level when these things drop dead, if they’re not already that is. Not enough of a an introduction for you? Well then, this here is a short six leveled zombie surival mod made for the classic 8bit mode. The mod is also made to work with the Sony PSP, the instructions to do so are also included in the package.

Gameplay
Now this here isn’t any Resident Evil, but it does have zombies. The style of the gameplay as a whole is done quite arcade like with hordes upon hordes of zombies rushing through the streets and corridors to feast on your flesh. Don’t expect anything too advanced with *insert feature here* as this one was meant to be a short and simple little mod, and does just that. The best way to describe the nature of the action is a little like Geoffrey’s previous short mod, Duke Nukem vs The Army of Darkness. Sometimes the action can become quite a bore and sometimes it can be quite fun, as you fight the large parties of zombies, either gnarling away at your chainsaw or eating the lead from your handgun. Other than fighting through buildings and the streets, you’ll be pressing switches, attempting to open doors that don’t open and travelling through maze like locations to approach the exit. Each level is rather short depending how fast you can mow down the undead and there’s nothing too difficult to accomplish here. 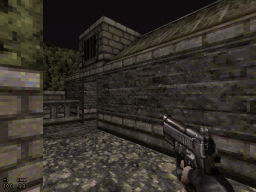 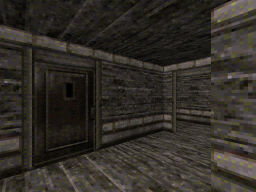 Design
This one feels like a new game, fresh looking using the classic 8bit colours that come with Duke3D. The art direction has style, using a mix of greens and browns gives off a different feeling to most stuff released, but it does become quite a bore with a lack of contrast, except for the blood and guts. Not that is matters much for a mod this small however. The levels are also done in quite a stylish manner, keeping to a minimalistic look while the textures provide all the details the interiors make use of low ceilings much like those found in the classic games Wolfenstein or Blake Stone. The style of thin walls between doorways was also quite nice too. Each location flows nicely into each other, between rooms and interiors to exteriors. As for the sprites and weapons, those too have been made to fit into style of the mod so nothing clashes and looks consistent.

Conclusion
Stylish looking, zombie survival mod with an arcade, gameplay approach. Might not be suited to everyone but is a fun little mod worth checking out. 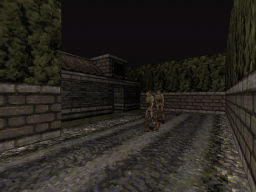 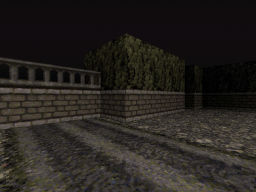