Gameplay
Two maps that follow the gameplay style as the original maps do, where you’ll find yourself working alone and with two AI soldiers part way through. The maps start off rather moderate and simple enough to get started but the pace of action and difficulty soon pick up while remaining balanced with supplies. The AI soldiers did get in my way a few times when retreating backwards but other than that they can be a real help. Action can get intense as you’ll find enemies in the distance trying to pick you off, high on ledges or coming up from behind here and there, which adds some variety throughout.

Design
The first map takes place in a dark, underground area which uses a brown, gritty look which creates a dark, eriee atmosphere throughout. This changes once the second level comes around using a lot more lighting and more blue tones. The structure and design is typical much like that seen in the original levels for the game, however the second part has some nice differences here and there, as well are a few large rooms. The texturing is moderate and done well, but nothing too special about it either, and as for the lighting, it remains quite dark throughout with several bright fixtures here and there.

Conclusion
Enjoyable, balanced and variety gameplay set in a detail map similar to those found in the original game. 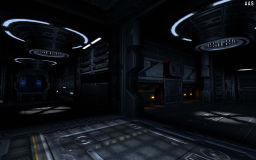 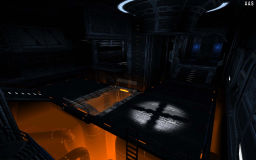 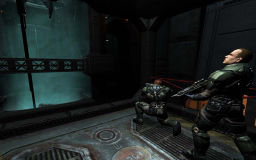 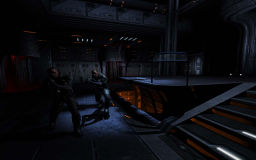