Gameplay
Ah, something a little different for a change from the high tech theme for this engine. This time set in an industrial factory setting most likely on Earth while introduced to a few small fights and other gameplay features. These are basically inspired from Half Life 2 using ideas such as holding valves to open a large gate, infinite ammo crates and ofcourse snipers, which is where the name Strombine gets its name as explained on the author’s website. This map was an enjoyable expierence, although short it was a good enough length with a good balance between supplies and enemies.

Design
Being set within an industrial factory it deffinitely catches that look while being quite big at the same time. Structurrally the map is well formed throughout, detailing both the play area and ceilings using plenty of arches, angled windows and walls with some great texturing throughout that fit with the theme perfectly. Lighting also helps create the atmosphere as bright white sunlight shines through the factories windows, with the light fixtures that keep it rather moderate throughout where only a few dark areas exist.

Conclusion
Short, enjoyable map set in an industrial setting with balanced gameplay with similarities to that of Half Life 2. 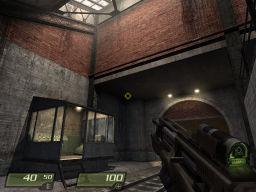 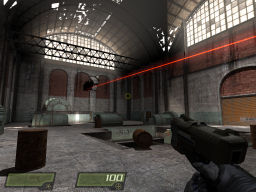