Gameplay
Keycard hunting and small fights here and there take place in this one, but nothing too special. Set in some sort of underwater facility, you have to look around and search for the two keycards to access another area in the map. There is a mix of light action and some horror elements, which did work pretty well, but the dark lighting and repeatitive door sound did get annoying at times. Flow is standard, and you’ll backtrack a here and there, and only a few times it can be unclear how to get into other areas later on. Supplies are lacking in most areas, especially for ammo. Health isn’t too much a problem if you’re careful enough.

Design
Pretty much average throughout the map, with nothing too spectacular about. Structure is simple, where each area has a reconisable purpose for being there. Lighting is existant and again has been done in a simple manner. Later in the facility there will be several dark areas to add to the horror touches of the map. The red lights on top of the transport tunnel in the larger underwater area was rather atmospheric, especially with such a dark shading about. Texturing is also average, but the choice for the main wall texture was quite bad since it didn’t repeat too well throughout making it look a little too messy. Some sprite work here and there, which is fairly decent yet still quite simple.

Conclusion
Average design and gameplay throughout. 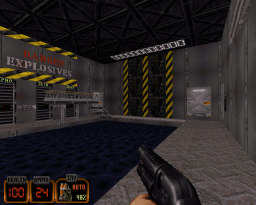 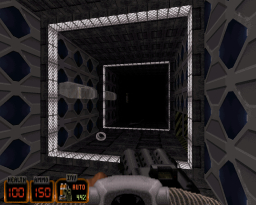