Gameplay
There are three maps in the wad, as suggested by the title which are quite short but very enjoyable to play through. Each one has a fair amount of gameplay in them, with some fair fights and plenty of supplies about to complete each one. They’re unrelated to each other but follow similar gameplay patterns and flow in the same way. Majority of the enemies are Imps and Bull Demons throughout each one, which causes some of the combat to be a little easy here and there. Few nice usages of the port’s features in here, the cutscene in the first map stops player’s movements a few seconds before playing which can be a little confusing to what happened. 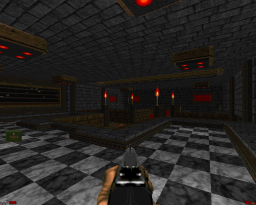 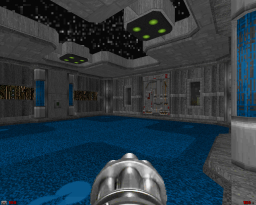 Design
A different theme for each of the three maps which gives some variety between them. The first is like a stronghold surrounded by a bloody sea. The second is a hightech facility with a grey and blue colour theme of which the design reminds me of Simplicity. The third is a wooden building with a slight gothic appearance to it, but mostly medium browns are used. Each map is structured out well and appear rather clean and tidy due to the sparse amount of details in there. In other words, the locations are very well designs for the amount of detail put in them, especially outdoor locations and areas that appear destroyed. Plenty of wide corridors and open spaces for larger battles, and lighting appears to be well done throughout with no major complaints. Texture choices and mixtures are very good, and one of the charms for the second level. The mix of blue and grey works very well especially with the new palette added to the wad. Some walls have glass panels showing off some liquid behind them suggesting the type of facility it is. Design overall is top notch. 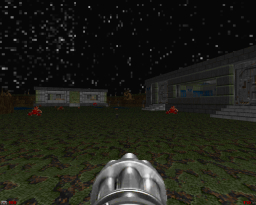 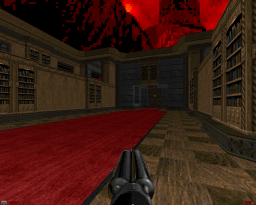