Gameplay
Split into two small parts, your character arrives by car to a lost city and you take control soon after the introduction scene is over. Throughout the map you will come across areas that are meant to creep you out and possbly scare you in others with an interesting usage of the default sound effects and character models. Action is very light as there isn’t too many enemies to fight against with only a few weapons available to you. Ammo and health is existant and placed in reasonable locations, with a decent amount. Nothing really too difficult here, since a lot of enemies can be picked off by hiding around corners or above ledges making things a bit dull. Opening the doors was a nice touch as they didn’t automatically opened as you approached them, although minor it allowed the player to take their time to see which doors could be opened by themselves. The map is pretty much linear however, a few places to explore but no alternate paths keeping things too much straight forward. 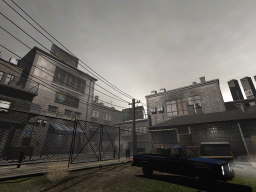 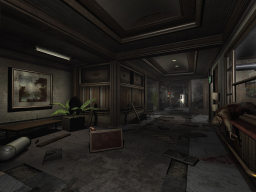 Design
Unlike the game this one is set in a realistically created town through all the aspects of design, which then obviously looks great. Good structure is located everywhere and hard to miss, the buildings in the background having their own shape yet sticking close to the overall style of the town. This is helped by the decent texturing done by the author choosing the right ones to do the job. Other small details such as air vents, exterior electronics and similar objects help add more to this realistic feel, along with the lighting which causes a dull atmosphere to surround the area. Although this can be good for the set theme of the map, it does slightly remove some variety in colour and makes things look too saturated. The same can be said for the interiors as well, although they do have some lighting which adds some slight ambience to the rooms and they have got more detail around the place. However this is caused by all the debris and other furniture objects scattered around to emphasis how much mess the creatures have caused compared to the outside locations, such as blood and broken walls showing off the pipework, wood work and bricks at the back which again is structurally realistic. One major complaint come across when venturing this building is that it lacks variety and starts to look repetitive except for a few small areas, which then again soon breaks when you enter the last area of the map.

Conclusion
Simple gameplay in a realistically designed town, which has been done well but does get a little repetitive throughout. 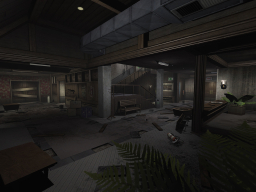 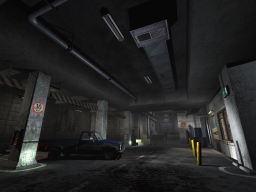