Gameplay
Santa has gone insane and is killing children and it’s up to you to stop him once and for all. You’ll be facing against some new enemies in this small mod that fits the theme perfectly, such as elves and snowmen which were also a nice touch. You’ll also come across some dwarves which didn’t really fit well with the christmas theme were still a nice touch to the gameplay which was quite challenging in several spots but possible to beat. All the supplies such as health and ammo have been replaced with christmas presents, which again was a nice touch to the atmosphere but they were kind of confusing at first. Three new weapon models are also included, a small christmas tree as a melee weapon, a christmas present grenade and the riot cannon from Shadow Warrior but the others were left as they are. The flow throughout each map is straight forward and ofcourse you’ll be facing off with Santa at the end which is a short and simple fight so nothing too complicated. Several bugs are present and some major slowdowns on the third map which ruined the experience slightly, and the mod might crash in some places here and there but it’s still playable. These might be fixed so check back on the link below for updates if you wish.

Design
The first map deffinitely has the christmas atmosphere with the music at the start of the short scene introducing you to the mission and the snow fall. The place is covered with lots of snow which is fairly obvious being the north pole with some good shape in the terrain. The weather and overall lighting also add more to the atmosphere here and looks good, and structural wise everything look decent with several trees here and there to break the white colour up a bit more. The interiors of the other maps were also fairly good but could have been better, but the caves and reindeer pens looked quite realistic though. Texturing was quite average which reflects the theme and location well but the christmas theme felt like it was missing during these areas, the bland and repeatitive lighting also help cause this to happen. 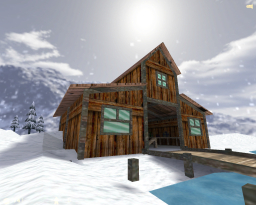 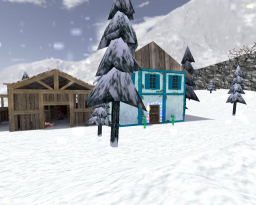