Shadow of the Colossus

Story
Tales speak of a distant place where creatures the size of mountains roam free. Bound to the land, those beasts hold the key to a mystical power capable of bringing the departed back from the other side. Spurred by love, yet armed only with a sword and bow, one man faces an extraordinary challenge. A solitary quest to find and slay opponents so immense they seem to posses no weakness. But in this desolate, beautiful land, very little is ever as it seems. An the journey is only just beginning. 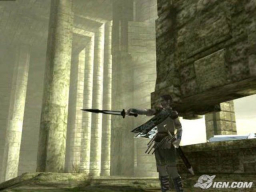 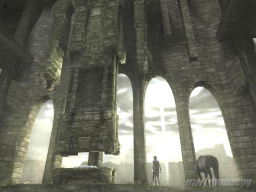 General
After the introduction of your task it is time to set out to find and defeat the sixteen Colossi that roam the land. However there is a lot of ground to cover in the game, especially when you check the map pressing the start button. But you only need to find one at a time though. The main character’s sword has an ability to find the Colossi and direct you to them by raising the sword in the air with the circle button and holding it down, looking around until the scattered light turns into a thin beam showing you the location of your enemy. You must travel in this direction each time, travelling the long distances on large terrain with the help of your horse, Agro to get there faster. Natural bridges and gaps inbetween the mountains break up the search from time to time and sometimes you will explore some old cave or ruin to embark in battle with the beast. The long journeys however can be a bother if you get lost but a majority of the time it is immersive to travel across the detailed lands with different types of locations such as desserts or grassland. Once after you have approached your target, a great cutscene will take place introducing you to your foe that can be rather breathtaking at the sheer thought of how you’re supposed to beat such a demon. 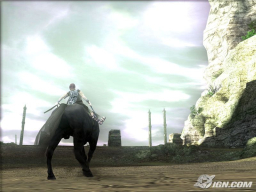 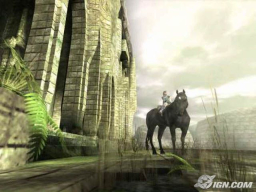 Controls / Battle System
Controlling the main character gets quite easy quickly out of the many functions you can do, on foot, on horse or while holding onto something which all have there uses throughout each of the battles with Colossi. A majority of battles will be set on foot while travelling will be done by horse but some of the fights will require Agro to join in. The controls can be modified as desired within the options menu which is a good touch so nothing is forced upon the player if they dislike the current assignments. A lot of jumping and grabbing is involved within the game itself as you’ll be climbing on top of ruins, rocks and even the Colossi to attack their weak points with powerful strikes, some of which will disappear and you’ll have to find another weak spot. Ofcourse you’ll have to find a way to actually get on top of the thing first and eventually you are going to have to use the enviroment around you and watch the behavior of your opponent to truely defeat it. However when in doubt, you’ll recieve a sort of hint from Dormin for what you must do and a few are almost riddle like but still helpful. Other matters also come into battle as well, such as your health which is the red bar in the lower right corner, and grip meter which is the pink circle above this. These can run out quickly if your not too careful but they will regenerate once you stand still. These however health can be increased by eating fruit from trees and grip can be increased by eating a lizards white tail, both of which are found in various of locations around the map. One major problem that affects the gameplay are the camera angles that can get very awkward from time to time ruining the experiences as it can affect the way your character reacts as well. 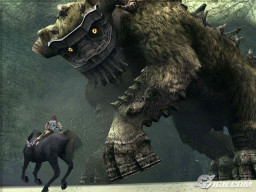 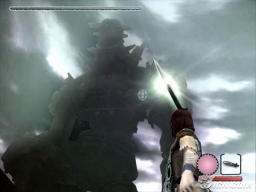 Difficulty
Once you have figured out how to get onto the Colossi, now you must stay on it without falling off. Ofcourse you can grab on for dear life as they shake around but you wont be able to grab on forever. Once the shaking about stops, you can stand in a safe area until your grip meter regenerates but possibly fall off if you’re not prepared as it moves around. Another difficulty for some of the beasts is that they move around a lot make it harder to stab their weak spot which then must be thought about a little more, nothing too tricky to figure out though. After defeating several Colossus however, they will start to attack you more than ever, usually with projectiles which can quickly kill you after several hits. Some of the battles requite Agro to gain faster speed to either run away or run towards opponents and the controls for the horse can be rather annoying. However, the overall game isn’t exactly difficult as the only thing slowing you down is the time to figure out how to get to it’s weak area which can sometimes take some time. Once used to the behavior of the Colossi and an understanding of the enviroment the battles can get pretty easy if attempted a second or third time. 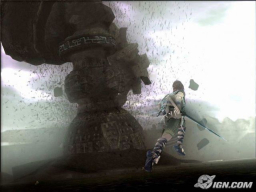 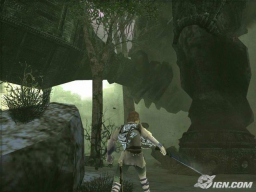 Design / Music / Sound
Large, open, beautifully designed landscapes surround the map with several different types of regions and styles with old, broken down ruins in different types of locations such as inside caves, forests, underground or out in the open. Everywhere is detailed to look and feel realistic keeping the locations immersive to look at, including the forrests with some interesting lighting effects all over the land. Everywhere has its own atmosphere that fits perfectly and adds more variety in your journeys. When fighting the Colossi, debris and particles scatter about as they walk around and smash their weapons down trying to get you give it a more realistic touch. Each Colossi has a very similar style but each with their own design and size, detailed very well with the mix of stone armour, moss and fur covering their bodies which can give them a more menacing appearance. Music is one of the highlights in this game though, the soundtrack fits perfectly and has some very inspiring tunes in there. Soft melodies during some of the calmer situations but then some louder battle themes with a different playing style and excitement to them. 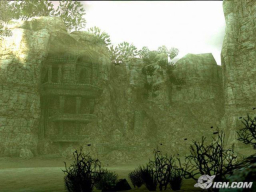 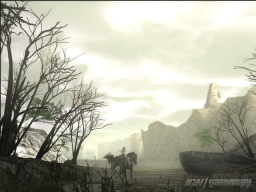 Replay Value
Once you have completed the game you will unlock two new modes the next time you decide to play. These being the time attack mode where you will load your saved game after the credits and pressing the action button at the idols. Beating the Colossi here can unlock special items. The second unlocked feature is Hard mode and the time attack mode here once completed is ofcourse at the same level with other unlockables to find.

Overall Conclusion
Epic battles with huge foes that can only be defeated with some thought. Original and interesting throughout all set in a beautifully crafted land.