Gameplay
This modifacation includes new weapons and some new models for characters and enemies. The weapons were rather decent but some sounded very weak for what they could do. The action in this one are very tiresome and get rather boring a lot of the time. Some maps have far too many enemies it makes them near impossible to complete without cheating and it also causes a large slow down too. The flow was still good but a lot of it was ruined by the gameplay which is a shame. There is also some new voice acting which was rather bad, especially since you couldn’t here it very clearly. There were some very unfair spots as well, one map fades in from black however enemy troops are shooting at you yet you cannot see them causing you to lose a lot of health. Ally troops don’t fight back making them useless and there wasn’t even any health at the top after the battle either.

Design
Sometimes it varies from average to a little over, but most of the structure throughout is poor. It sets off the idea of the buildings and locations clearly but the way each area was created could have used a lot more work. Even some of the scale was off, and some areas looked untidy. Texture choices were good but weren’t used too well either.

Overall Conclusion
Tiresome and boring gameplay, with some bad structure and design. Could have been a lot better. 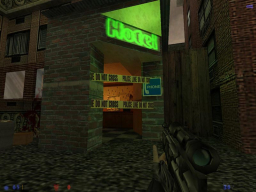