Gameplay
If I were to be short, the modification starts off interesting but it then starts to drag on and get really tiresome much later on. Throughout, there seems to be some Silent Hill touches to the mod, mostly due to how the whole thing was designed and the overall look and style of enemies. The zombie type creatures were the creepiest out of the lot, the noises they made, the way their heads moved and the speed they ran at you just sends a chill down your back. This was all controlled and balanced very well at the begining around the Hospital levels, yet it starts to deteriorate from then on which was a shame as it had some potential to remain enjoyable. There were also a few elements of surprise that made me jump a few times, sometimes commenting what the hell I just saw. Those were good moments as I felt like quitting as I didn’t wish to find out what I’d find next, but as I mention previously, it got disappointing later and those moments felt too predictable due to that. I did like the corridor that kept changing everytime you got closer to the end, that felt very much like Silent hill although some of these great moments were lacking.

A major fault I found in the mod however was it being so dark. So dark, even the flashlight didn’t help much so instead of being scary it was more of an annoyance in the later sections. About the levels overall, the hospital section was probebly the best part. The different areas and the backtracking were good for the survival horror aspect, and the darkness worked best in these areas there were only a few enemies about keeping the scare level moderate. The later levels tend to be a bunch of dark hallways with hordes of enemies that brought the enjoyment right down. You didn’t need to think about watching your back as it was predictable something would be there. However, the mansion area helped it slightly but not by much and it had a large Resident Evil 1 feel to it, but this section was also controlled well throughout, yet not as good as the first. Weapons are given to the player in a very balanced way, good lengths between each of the new pickups and the powerful ones aren’t given too early. The selection is a knife, pistol, shotgun, deagle and rifle. An average set of weapons but there was a fair amount of ammo throughout and always enough health to survive, except maybe in the areas with hordes of enemies.

Design
The design overall reminds me of Silent Hill in many ways, the textures used in each of the levels with a grainy, dirty look to them and the slight lighting helps achieve this. Many of them were used well, although a lack of trimming in several places made most floor textures not mix well as they change. Most of the structure is alright but rather simple yet the dark levels make it hard to see some of it.

The darker areas I noticed were very under detailed, mostly long corridors with nothing too special about them. These of which are placed several times throughout the mod affecting the gameplay. Each of the levels structure overall were pretty much unlinear and were doine very well. The exterior locations were designed much better than the interiors but again the lighting made it hard to admire it, some textures being a bit blurry too. The mansion area was designed very well with great texture choices and filled each room at a moderate amount.

Overall Conclusion
Not a modification to avoid, although rather tiresome it does have it’s good moments worth checking out. 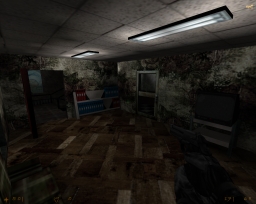 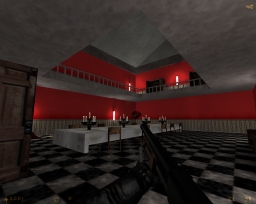