Secret Of The Ancient Japan

Sotaj is a good Shadow Warrior map that is worth your time if you like challenging maps. This map is very well detailed with nice choice of textures to use, and most rooms look accurate, and look very japanese. The place’s I liked most were the outdoors, since there are plants everywhere and it looks very realistic the way he as done so. Sounds add a lot to the atmosphere also. This maps has a nice number of enimies which still do pose a challenge, especailly the fight on the roof with the snake. I was very low on ammo after that, which made me resort to the sword alot during the map. I did manage to complete the map, although I was very low on health, but that was my fault since there is plenty of health in the map, that I didn’t pick up. The gameplay is mainly to find the four keys to get to the exit, but the last key requires a bit of tree climbing. Number of enimes is balanced out and there is enough ammo if you use it wisely, but a bit more could of helped out a but more. I really recommend trying out this map, especially since the port was released and you’re looking for some user maps to try out. 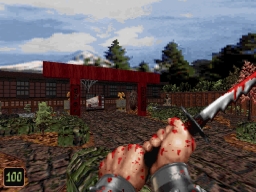 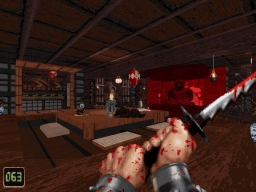 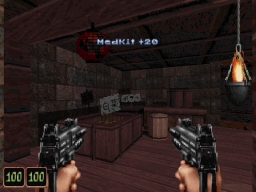