Not too hard and not too easy, but this sometimes depends who you play as or where you are located. Some areas have hordes of enemies but others only a few. The map itself if easy to get past, but theres only one weapon available for the whole map, but enough health about. Map has some tricky parts that can leave you clueless at times, but its very possible to complete the map. The last battle is tricky due to having only one weapon, and not a big amount of space to dodge attacks. But overall, fights are fair in the map.

Average amount of detail and the structure is quite simple, but the layout is tidy and good. Many walls are bare and map lacks some detail in some areas. Texturing is good, but not brilliant but the author did pick the textures well. A lot of open up areas for some battles, but bigger battles are confined into smaller areas which is bad. Lighting in the map is dull, and stays the same throughout the whole map which could do with some improvements.

A simple HeXen map with a good enemy balance and average design. 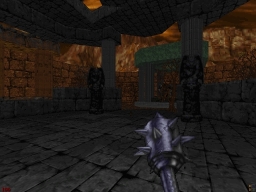 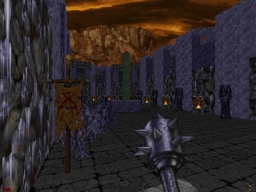 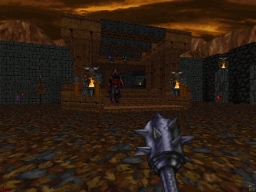