Science And Industry is an online modifacation where you compete against the other company by stealing their science team, destroying their tools to slow down their research, kill each other and place devices near opposing scientists to disturb them. The goal is to gain the most money per round. This modifaction offers a lot of fun to last a while and very addicting to play. All the different devices and weapons to use against the other company are very well thought of and most fun to use, my favorite is the radio to disturb other team’s scientists. The voting system is good and the ammount of stuff to choose from is good. Theres loads of different ways to get the opponents scientists, you can go alone, you can be stealthy in their base and walk, you can take shortcuts and vents, you can go in as a team and do the above and get more scientists at a time and some of the other team can camp at the base near the scientists and protect them.

Above Average and not too detailed keeping you from lagging of too much action and running. Each level has different routes to take you to opponent scientists which is good, and corridors are big for nice spacey action. The hud is designed well with other other screen stuff which is made well. Weapon designs are also good and well designed. Textures have been chosen for level themes and the different coloured walls representing other teams is also good. 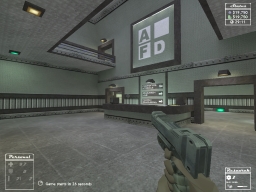 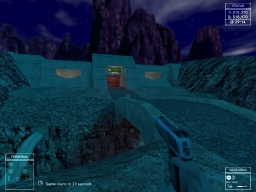 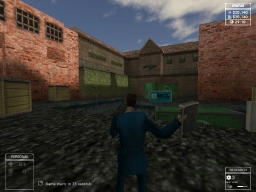