Another action packed map from KaiseR that remains fun and interesting until the end. A lot of enemies and respawns around the map with a large viarity of enemies to prevent the player from getting bored. There is a lot of ammo, sometimes too much but it still gets used up later in the level and weapons have been fairly spread apart too. Plenty of health around to survive the map without too much trouble, with a few powerups here and there that come in handy. Pretty much, the gameplay is very well balanced and keeps consistant constantly. Other than the action, the map contains a simple keycard hunt but with interesting elements to change the gameplay from time to time, especially the choice part way near the end of the map. The map never gets tiresome and remains challenging every step you take.

A medieval theme map mixed with high tech and works well throughout. Structure of the map is very impressive as it keeps a clean and tidy look in many locations. The outside landscape was also pretty good looking and very natural adding to realism, with interesting looking medieval homes. Lots of blood and hand held weapon sprites outside as if there was a recent war added to atmosphere as well. Texturing is fantastic, every texture chosen to fit and aligned perfectly. Even the new textures fit perfectly and blended with the rest of the map. The skybox also helped make the player actually feel the sun in the more brighter areas where sunlight realistically has been worked on. Other lighting in the map has also been thought out carefully, again adding to realism. Finally, sprite work was also pretty clean without any complaints and was practically everywhere but not overused that would cause a mess. 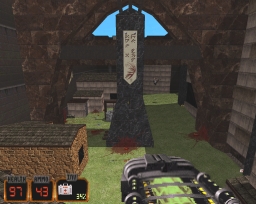 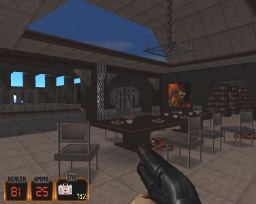