Fairly easy map, which doesn’t have many enemies. The map doesn’t have many respawns either, which is a shame, and could do with a lot more enemies to deal with to add more excitement to the map, this doesn’t mean the map is bad though. The map does have plenty of ammo and health making it too easy to play through. The map has a lot of button switching to progress futher into the map, which doesn’t have any exciting feel about progressing and feels dull doing it, but there is one interesting switch near the end of the map though. The map has a good intro at the start too, and a very well made ending.

Above average, with a high tech base theme with a bit of hellish design such as the crosses for windows and skulls for extra details. Layout of the map is simple, so it’s hard to get lost, and texturing is done well. Ceiling can be plain a lot of the time too. Sometimes texturing looked a bit random is some places like outside where a lot of them don’t match.

A good map, but the first in the series was better. 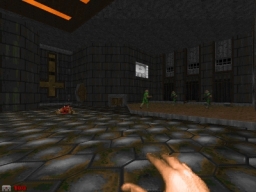 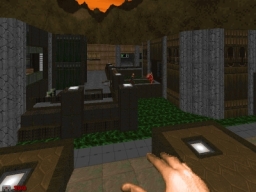