Easy at first but gets very challenging, even on the easiest skill. At the start of the 2 episode wad there isn’t many enemies but the furthur you get the harder it becomes as more enemies are place in the maps and sometimes really large hordes of enemies. There is a lot of ammo and health around to survive, no more is need in the wad since there is enough. Weapons have been placed well throughout the wad and chosen well for when the play can pick them up. The maps are simple, as the title says, since it uses alot of button puzzles. There are also a lot of traps in the wad too, some which get too over used. The wad can get tiresome after sometime of playing, especially the really large battles are repeatative traps. Although the wad is worth playing since there are lot of nice features, some of which are fantastic ideas and fit very well.

Very detailed maps and every texture has been chosen to fit the maps theme. Everywhere has been structured well and the map layout is very tidy which is good. The lighting and shading are great since it looks realistic for Doom and fits the mood of each map. Sometimes design gets repeatative but the later maps start to get more variation but keeping the style the same. Some corridors and rooms can be tight for battles, but works well for a challenge too. Larger rooms have the bigger battles in them and the rooms are still detailed to top notch quality.

One of the best Zdoom wads, can get tiresome but has great design and gameplay. 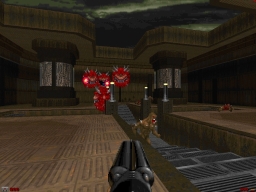 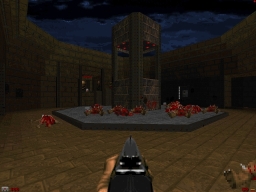