Introduction and Warning
This is a three map series, where Duke’s brother has got himself lost in hell and Duke must find him. This map series has a lot of biblical reference that may be insulting to some people. The map series also has a lot of sexual and rape reference, and some racism too.

The Abbey Level
The first level. In this one you have to press all twelve buttons to proceed onwards.These open a pathway in the first room. This map can be entertaining buy it’s a really weird one too. There are rooms with homosexual reference, rape and sexual reference, lots of satanic, death and torture reference too. But it adds to the feel of this being hell. The level is good, fair amount of ammo, a bit sparse on health but possible to complete if careful. Enough monsters outside to keep you in actoin, but lacks them indoors. Design is good in some areas and the shading is good, but some rooms lack it though.

The Church Level
The second level. A lot more satanic and more death reference and a lots of reference about Virgin Mary too. This map gets a little more interesting as you travel deeper to get to hell. Design is good again, shading is good, but sometimes lacks it. Some rooms have very detailed sprite work. More ammo and health this time round. Monster amount is a bit bigger, but still not enough.

The Catacombs Level
Last level. Much more reference to hell this time. Good map, with nice hellish theme with a lot of violent atmosphere around as well. Texture choice is good, some times basic in some places ammo count is a little more higher again but still lacks in a good amount of enemies. Boss fight is done well, lots of space to move and you have plenty of ammo to beat him. I managed to beat him at 100 health and using pistol and pipebombs only on my second play through the level. 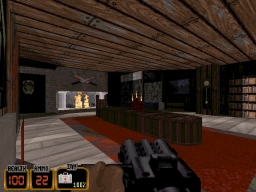 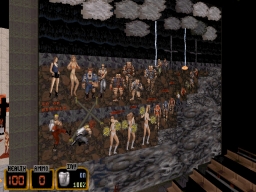 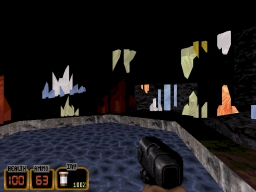 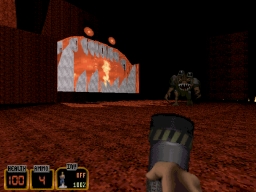