It’s a late night and the Aliens have headed out to do some last minute Christmas shopping by occupying a shopping department named Queen’s Mall to grab the best deals in town all for themselves – everything is free for the taking! Duke has caught onto their plans as he usually does, loads up his pistol, slips into a pair of high heel boots and makes his way over to save the holidays one more time.

FF is all about taking your time to explore a large shopping mall to cover as much ground as possible to seek out keys aiming to gain rooftop access and taking out any aliens that get in the way. The level starts with a linear walk through the back storage rooms before opening up once inside the mall proper. Due to the non linear nature of progression, locating and making use of the first require key could occur at varying points for different players all dependant on which route is chosen for exploration, possibly finding the card before half the level has been ventured. As if in response to that nature, additional locks are then positioned to barricade progression in such a way to ensure a sizeable portion of the mall would be visited before reaching the final set piece. One of those locks includes a new keypad feature that requires learning a specific code hidden somewhere in the complex. 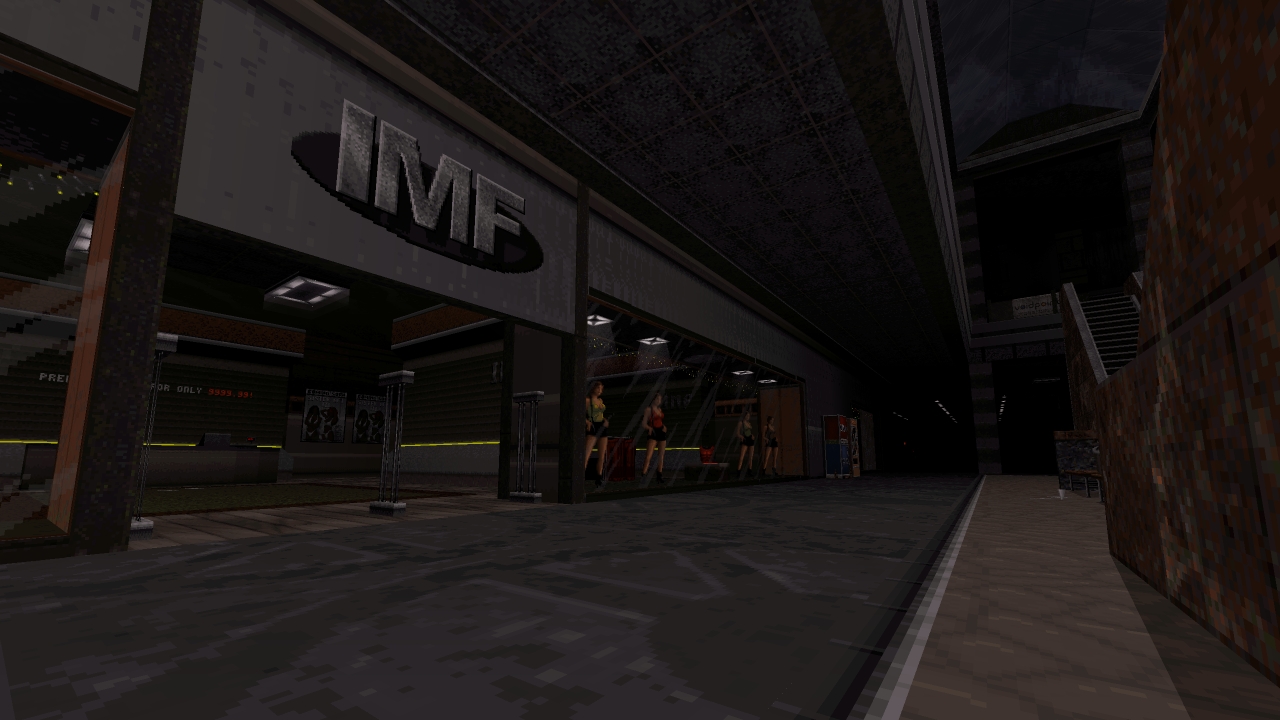 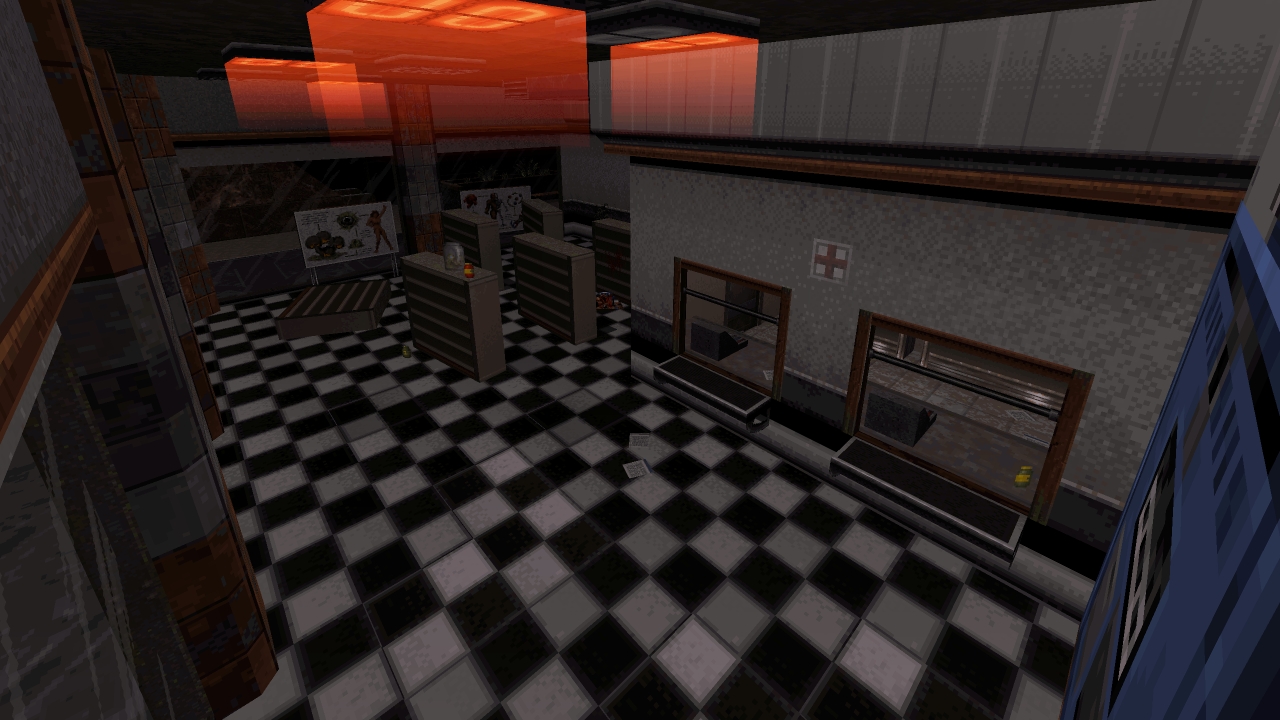 Fights are often up against compact groups spread around the mall and taking shelter within certain stores, but tackling them poses little threat in the long run due to their relatively small numbers compared to the vast space and cover available right up until the finale. Their existence here seems focused on filling out certain spaces but otherwise consists of many quieter moments, opting for a laid back experience that prioritises touring around the environment to enjoy the scenery whilst having something to shoot at along the way to meet a combat quota. There is nothing wrong with that approach toward gameplay design in this case either as sometimes it works as a nice change of pace to chill out while playing. Ammo and health supplies are provided in abundance along side a wide choice of firearms to pick through. Extra supplies are available for those able to locate the blue key card for the gun store or by solving secrets should they desire the rewards. The only technical problem I came across was regarding a key-binding confusion trying to confirm my keypad code input because my inventory key isn’t bound to “Enter” and assumed it would either be that based off a keypad layout or otherwise my use key. 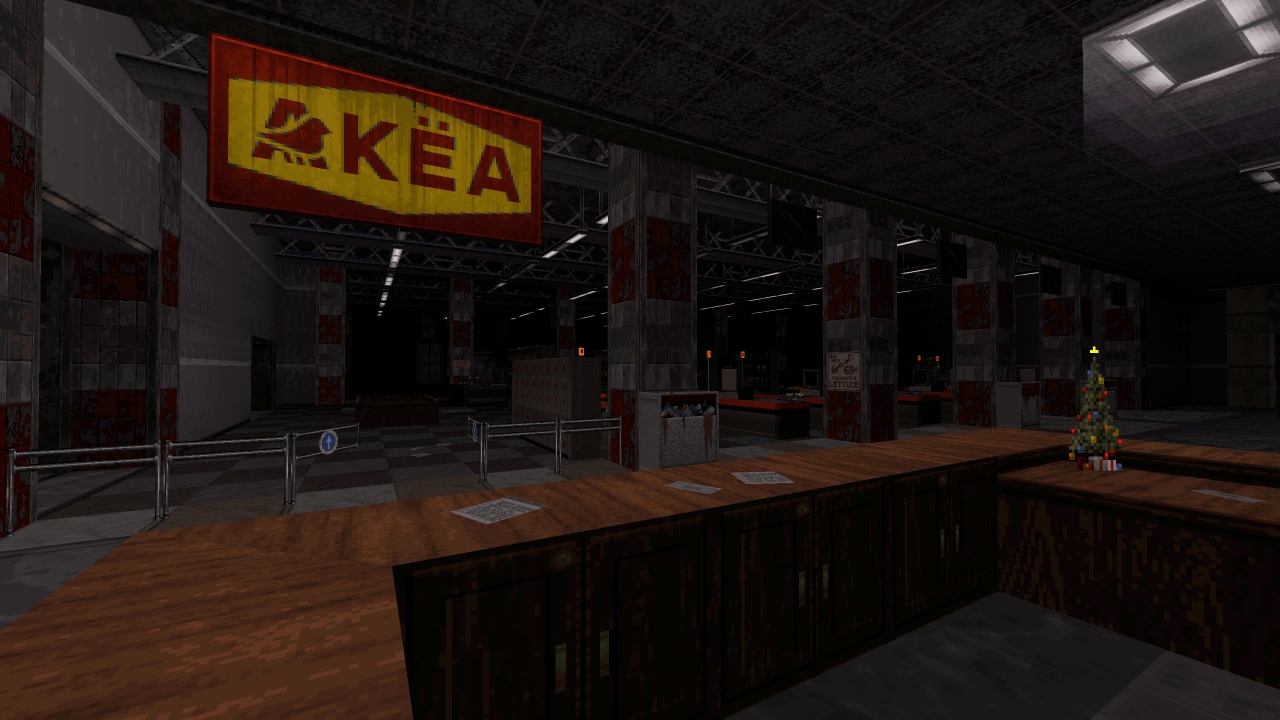 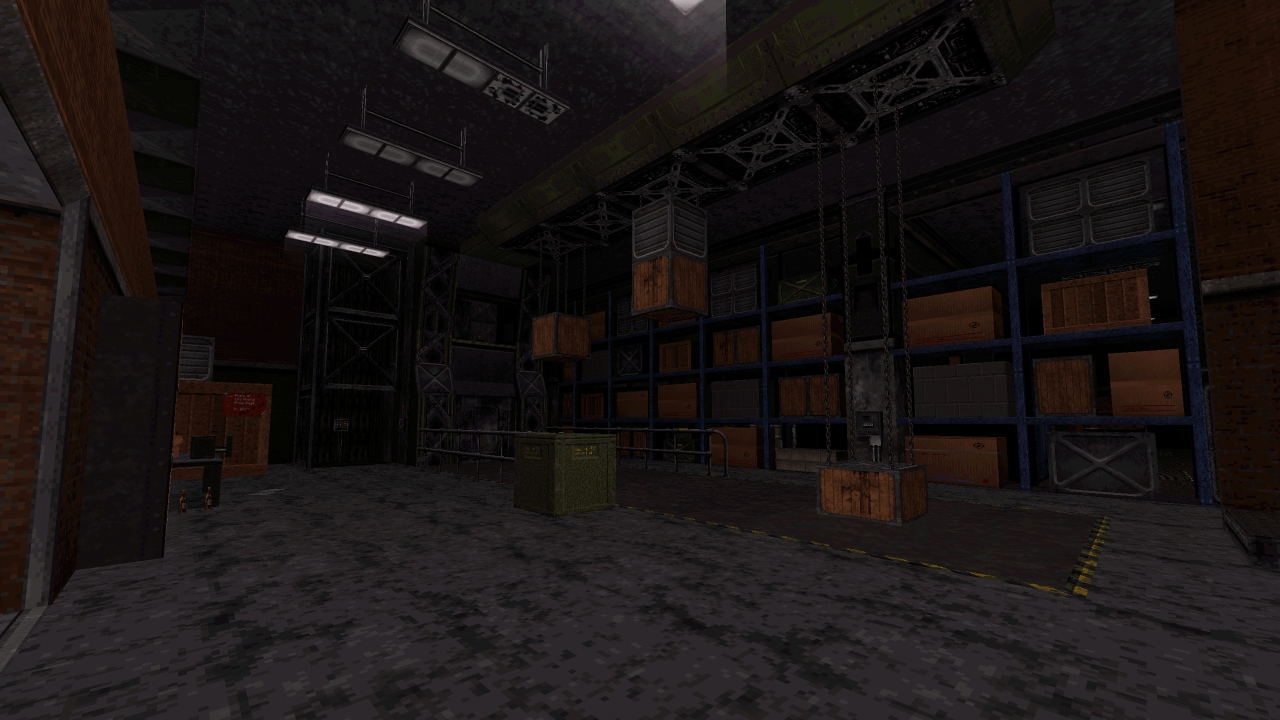 FF boasts a design that aims for a realistic interpretation of a mall setting and its many shops inside, using mostly vanilla assets with a few new inclusions, to achieve a detailed environment rich in visual variety, careful texturing and intricate sprite constructions. The main shopping hub itself is split between two floors making for a good thematic use of true room-over-room to really sell the idea this is a multistoried building, connected by escalators on either wing and balconies overlooking areas below. Every location boasts a unique design and style of their own to represent a wide host of stores and recreational sites, crammed with furnishings to suit their intended purposes without disrupting movement and does a great job ensuring these places don’t feel too generalised. There was always some joy entering a new shop to see how they were put together and how different each one would appear, especially the clothing store donning some custom threads to authentically decorate its interior. The earliest storage areas could have easily fallen into the trap by looking mundane but still manages to have a sense of place and purpose to it because of an attention to detail; boxes and crates are neatly stacked up on tall racks, large bay doors along angular walls for incoming and outgoing deliveries and a little forklift parked nearby waiting to move goods around. 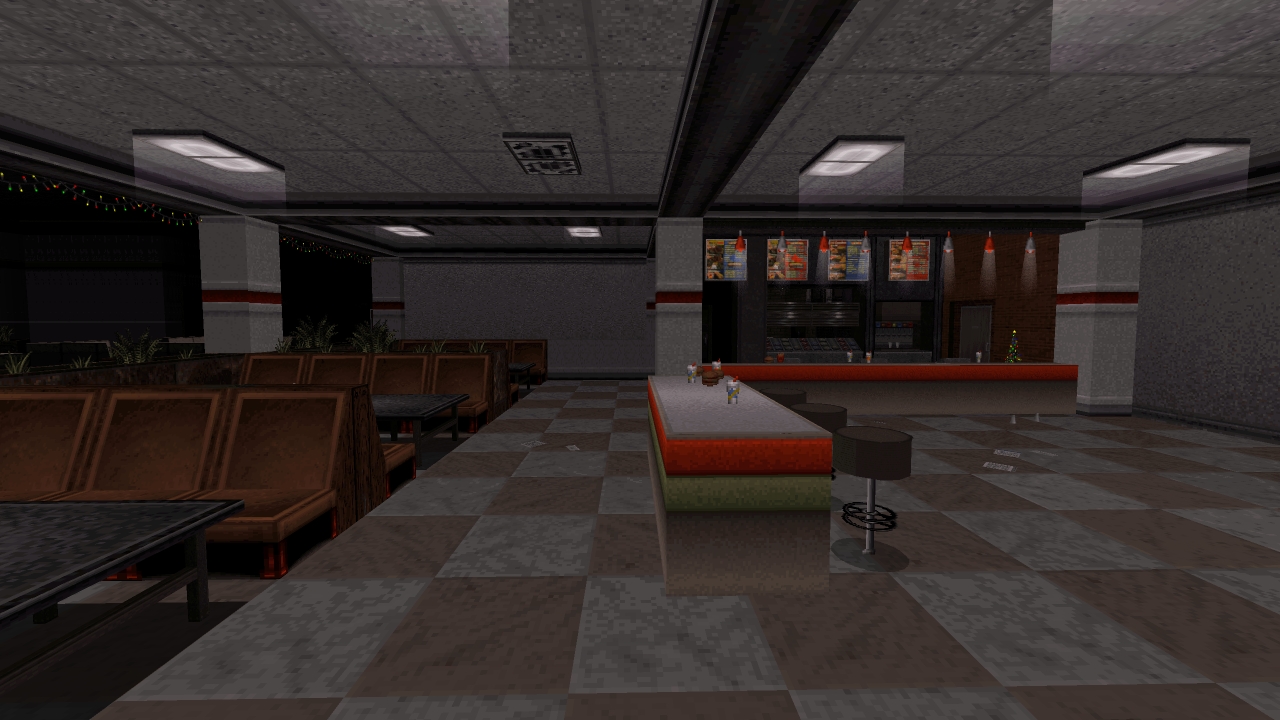 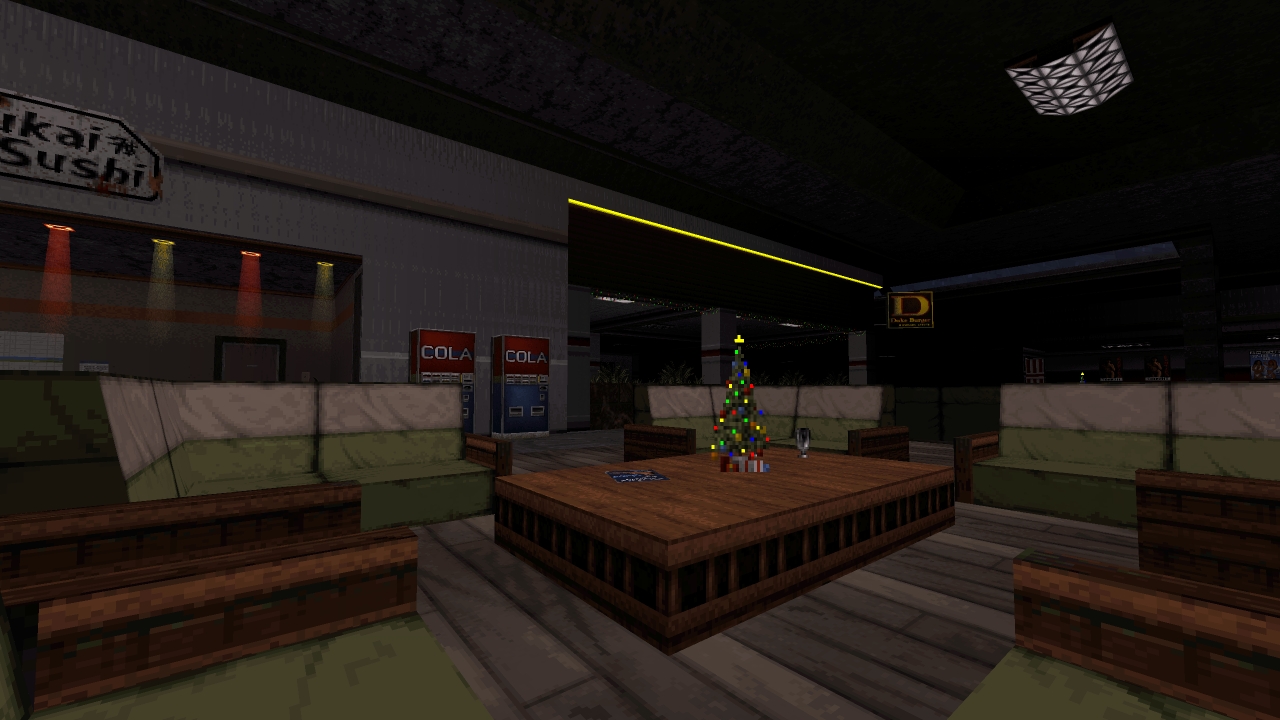 Visual sights that please the eye have been sprinkled just about everywhere which is especially nice for those who appreciate seeing unique texture combinations or gushing over how the construction of certain objects or pieces of decoration were achieved. Other prominent features I enjoyed checking out also include; a densely packed grocery department complete with an Ikea homage and there is a beautiful exterior shot from the front lobby making me wish I could take a detour outside and explore beyond the level boundaries. If anything to critique I wasn’t sold on the overall flat visibility which appeared to create a monotone look across the whole experience. While it does depict a particular late night moodiness there wasn’t enough of a sharp contrast between the existing light and dark areas to create a strong sense of depth. This becomes more obvious when observing places at a distance as they’re shrouded in darkness which always always felt off as certain areas should appear brighter than depicted due to the number of working light fixtures, for example at storefronts. This resulted in the whole map blending together too much as it tore away from the distinctiveness to several landmarks, I believe the lack of visibility differences can work well in certain levels but the loss of potential boons to atmosphere is mildly disappointing.

FF is simply a solid level that looks great albeit just shy from its full potential being entirely exploited. It comes across as a visual design show piece through the Queen’s Mall rather than a constantly breathing level with major set pieces to rely upon, however that approach in itself is perfectly fine for players seeking an adventure just to chill out without a constant pressure on their shoulders and we should always welcome these types of experiences now and then to break up the usual action focused mould of Duke3D releases.