Responding to a distress signal Duke arrives to find a space station that has become under siege by an alien threat. Not only must this nuisance be dealt with, his secondary goal falls under mechanic duties to repair and refuel one of the shuttles to escape with once his job is complete. Now if only the five pieces required to solve that problem weren’t conveniently scattered across the station.

Struck by a spark of inspiration Maarten decided to shake up his usual formula by tackling a theme amongst the vacuum of stars, a welcome change of pace considering other works have typically been grounded around places on Earth or set around strange alien environments. It wouldn’t surprise me if his involvement during the eighth Community Build Project stirred up ideas over the years just yearning to be let loose. SPACETRONIC then takes this another step further by implementing an experimental gameplay style having a wider focus on exploration to locate missing machine parts. These are hidden across three sections of the space station each of which can be accessed in any desired order creating a non-linear workflow for players completing this objective. 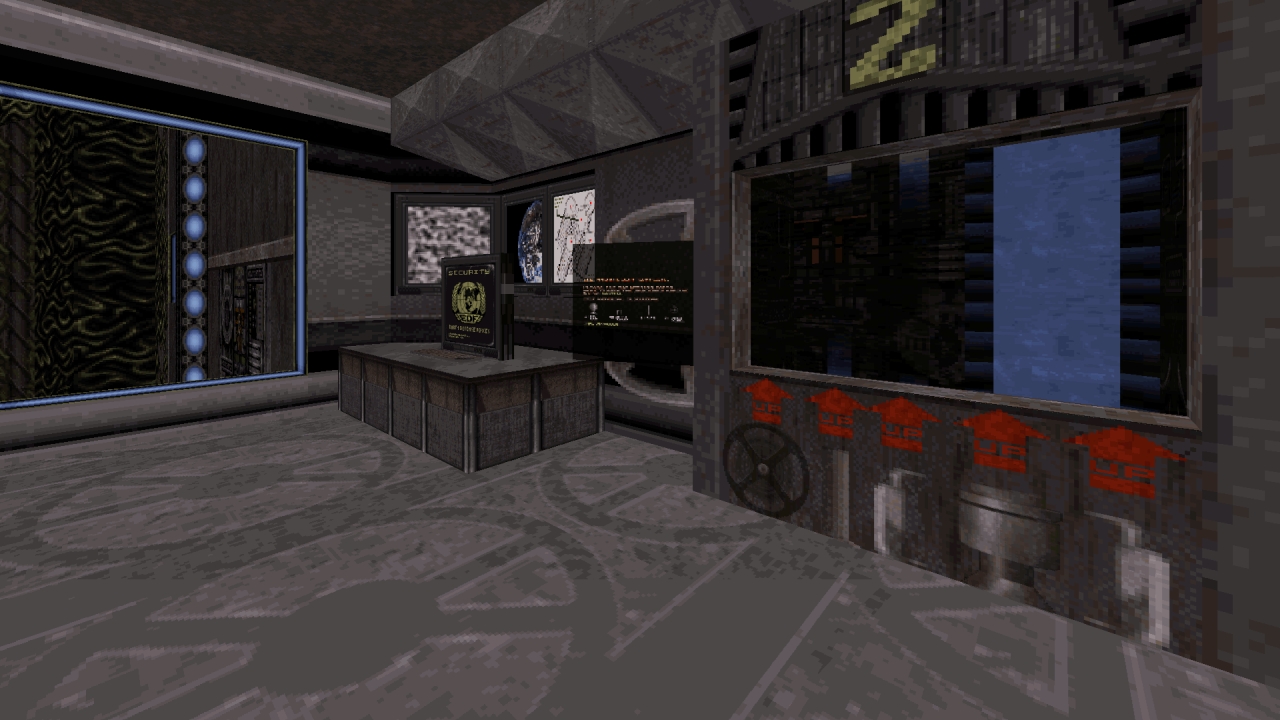 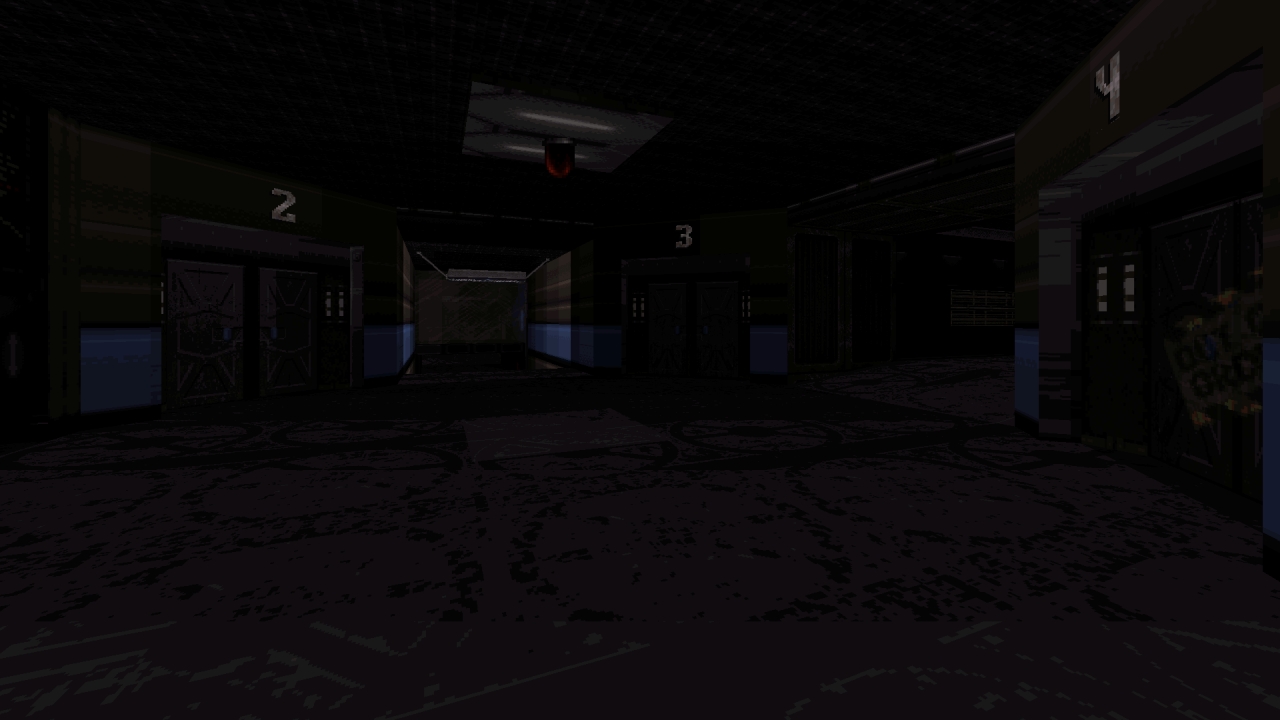 The space station itself has varied locations to visit consisting with all the usual trappings one could expect to see from the theme itself. All three routes have a distinctive flavour setting them apart both in terms of visual design and how combat has been integrated there. One path is slower paced that involves creeping through dark experimental labs. Another involves defending against a barrage of squads defending an reservoir seeping with infestation. The last leads towards a heavily guarded power core with reinforcements on standby should Duke make it through. Action otherwise primarily leans toward a constant alien presence and doesn’t shy away from using aggressive monster counts or otherwise guarding areas using turrets and drones – perhaps the station’s security system having been repurposed. These threats are easily dealt with using a large arsenal of weapons found inside an armoury with enough ammo and health supplies to last most encounters. This place then becomes a constant pit stop after every milestone before continuing onward to search for additional missing parts. 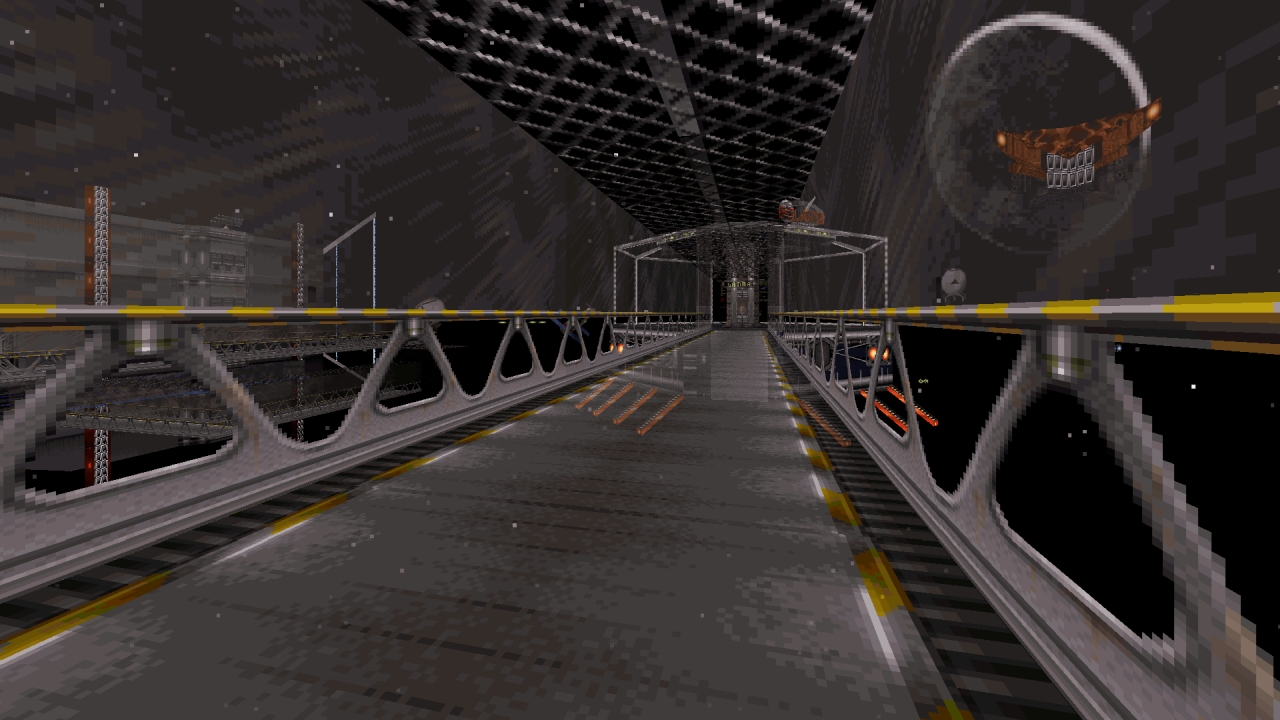 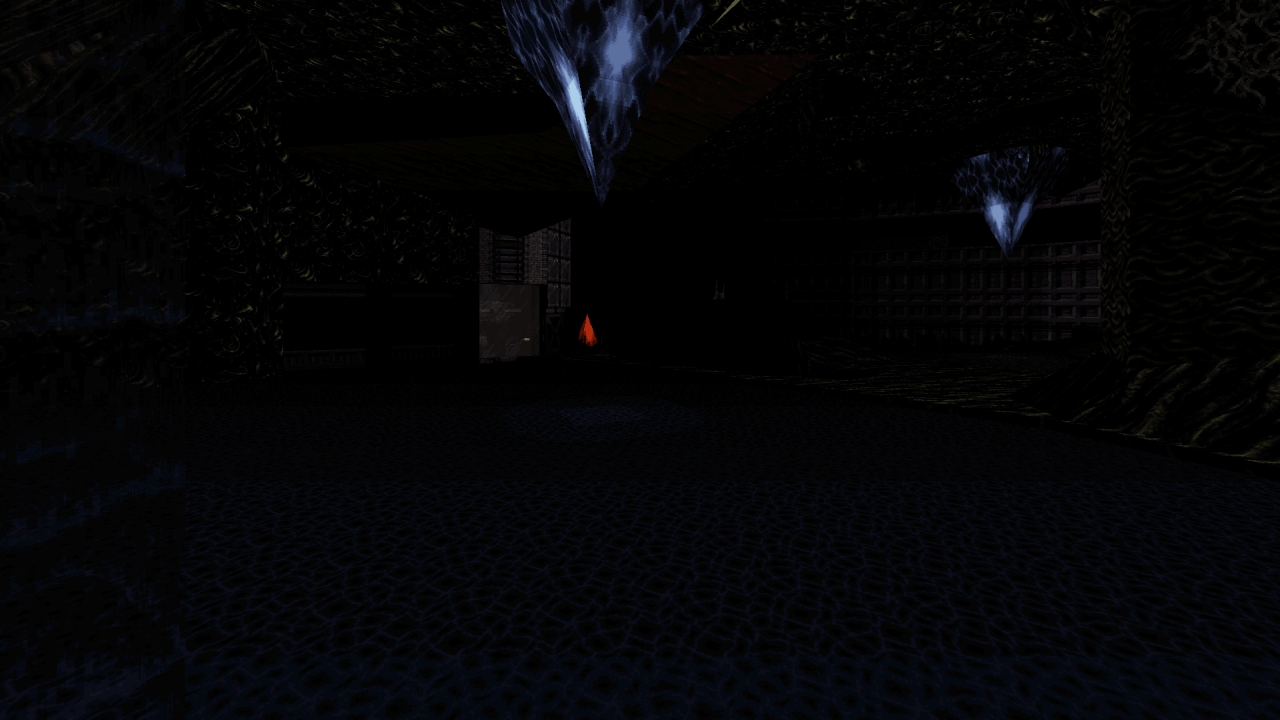 SPACETRONIC is no doubt a solid looking level crafted in Maarten’s usual style that ensures every area differs from another achieved using several texture combinations. Many windows peeking out into space help to depict the chosen theme and shows off a rather unique external design for the station complete with strange spinning contraptions and an alien vessel patrolling the void. While the following can be forgiven considering this is Maarten’s first solo venture working on a space level, there however seems to lack a central purpose for the whole base that ties everything into one neat package and areas that significantly stand out as a result, instead choosing to have every possible element that could be expected from the theme and therefore creating a too generalised environment. For example there exists research labs that may suggest the type of work taking place here, but those were a mere speck amongst the dominating storage and engineering sections. Defining a stronger, specific role for the space station and the sections within might have allowed for suitable locations to position machine parts, which ties well into my next point of critique. 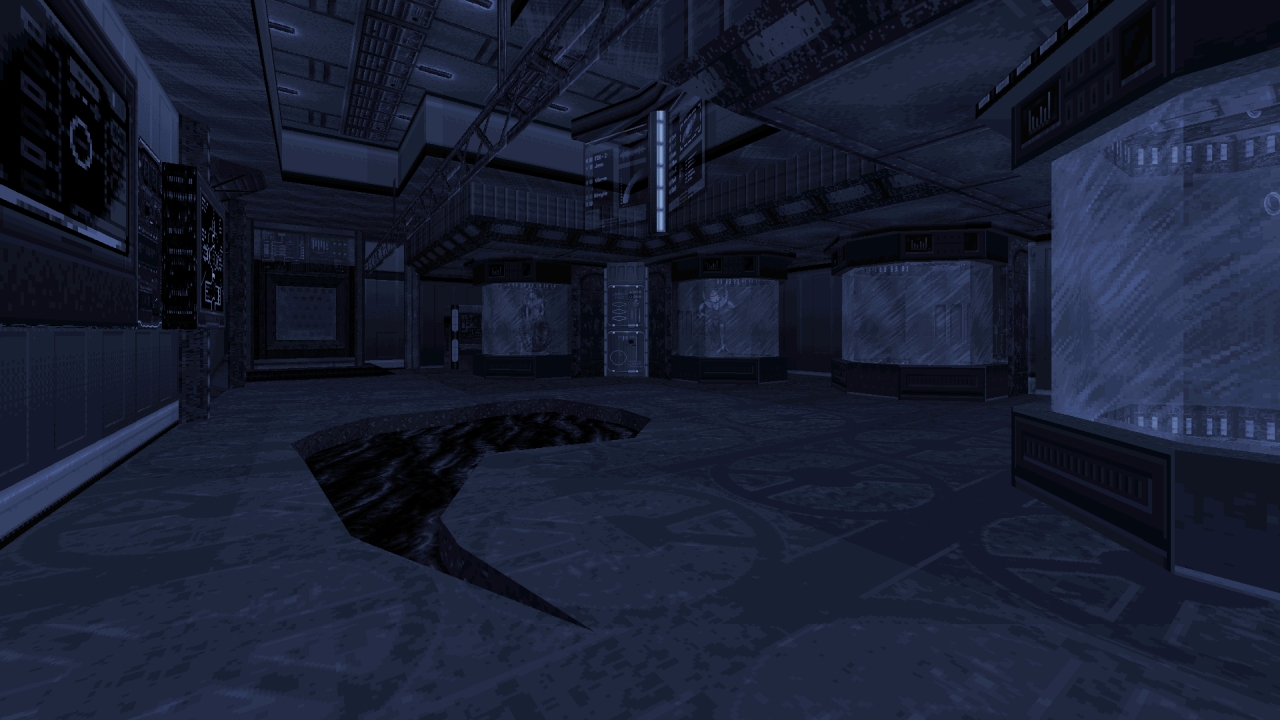 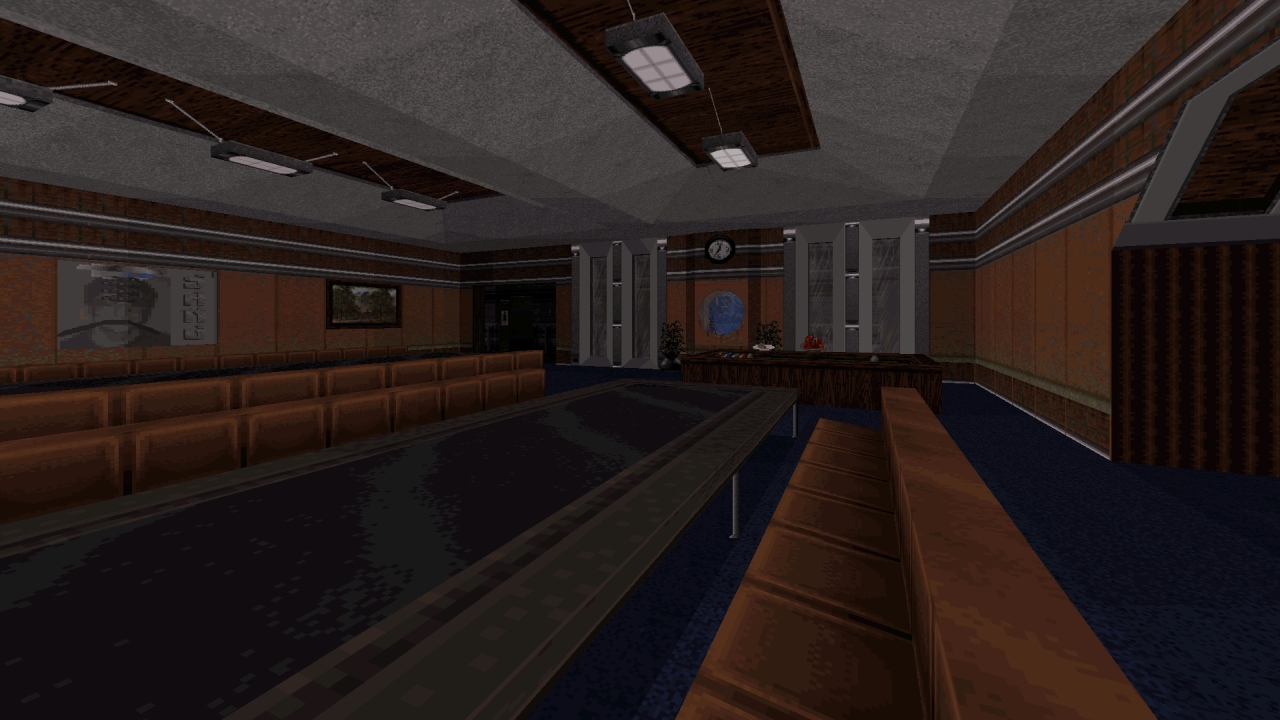 The main objective focused primarily around searching for specific objects is an idea I don’t mind since exploration is one aspect in gaming I very much enjoy doing, but wasn’t convinced regarding its execution throughout SPACETRONIC. The foremost trouble I had was locating certain parts because not only were they generic singular sprites that are often used as decoration across other custom levels, but their placement too were not distinctive enough and tucked away in unsubstantial positions. The torc in particular is especially guilty of this sitting in an unimportant niche as if simply existing for nothing more than an overarching goal waiting to be picked up. In contrast the pipe piece had an entire area dedicated for its retrieval involving a switch hunt and platforming that kept me engaged in what I was doing. Another problem I ran into was grabbing the item without realising when too caught up fighting aliens, accidentally backpedalling into them as I experienced with one of the brackets and wasting time trying to find a component I’d already snatched up. An alternative method for this concept could be positioning each object in more apparent locations suited to them, which is where a stronger role for the space station comes into play, leaving the challenge down to the acquisition process instead. One final note of disappointment is upon completing this goal players are fed enough rockets to trivialise every oncoming Battlelord during an otherwise good escape sequence.

SPACETRONIC offers consistent yet varied action packed encounters in between bouts of exploration focused on keeping those eyes peeled for important items. Despite some of my own disagreements with the overall execution, it is good to see that Maarten still has an itch for mapping, even going so far as to experiment with an unfamiliar theme and a different style for gameplay. Also included, becoming a nice trend with Oostrum releases, is a custom music track composed by Maarten himself, a calm ambience evoking an adventure out in space with confident loneliness emphasised by short guitar rhythms.