MIASMA is a non-linear beast of a level that features several vicious encounters scattered along its many paths diverting from the central hub. Choosing which direction to take first could be best described as picking your poison, not knowing what dangers might be lurking ahead.

Interior halls twist and turn creating a wild sense of interconnectivity as players are expected to climb and descend through its varied and rather nonsensical routes. Some venues may require a keen eye to discover alternate paths leading to additional segments worth visiting. How these areas link up doesn’t seem too apparent during the earlier stages due to its tangled grasp on navigation, becoming more obvious during play as sections open up and barriers are lowered allowing a much better understanding of the final floor plan which tends to favour an organic and dynamic flow between areas more than it cares about being a plausible one. This aspect also holds true for the environment design too which embraces a dark and brooding ambience, taking place within an abstract industrial complex using stylised metallic architecture bent into angular forms piecing together uniquely shaped interiors, coming off as a distorted apparition of an actual building from within while the outside impression appears relatively sane by comparison. 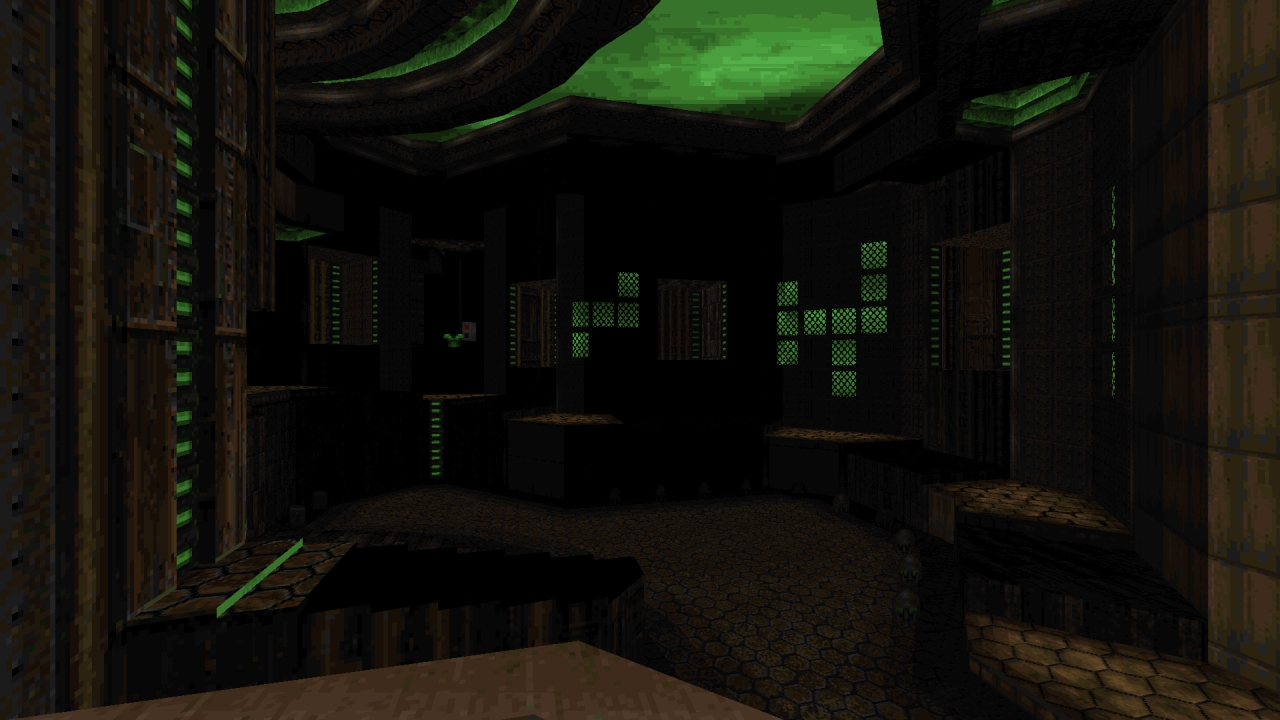 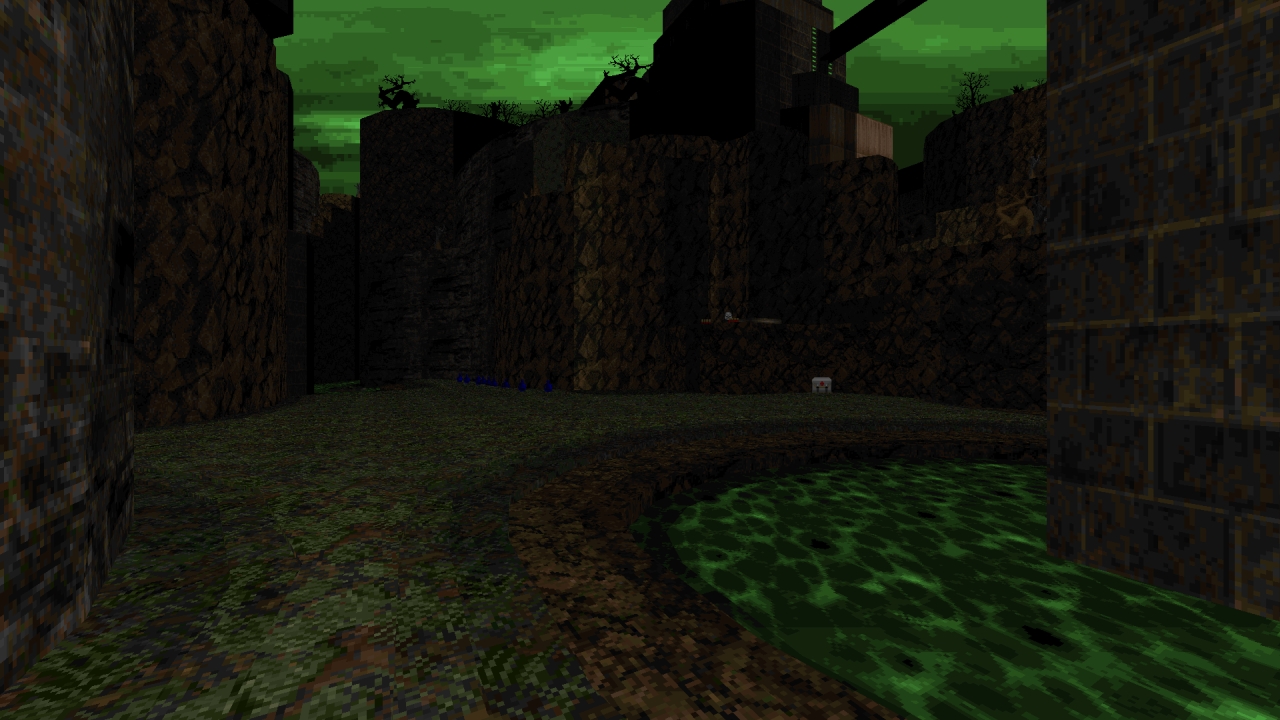 Limited to a small colour palette adorning shades primarily of brown MIASMA still looks gorgeous, drenched with an atmosphere evoking weariness, permeated in constant shadow through a particular lighting style where sectors are often split up into gradient loops and darkened closer to the edge. Green is then used to inject a striking contrast from an infectious, dominating skyline right down to smaller motifs such as trim work around window edges, bright seams between floor panels, liquids shimmering on ceilings or glowing light fixtures decorating the walls only emphasising the strangeness that dwells here. Chaingunners have also been outfitted in a green attire to feel right at home, therefore it’s a shame that Cacodemons and the flame surrounding Lost Souls weren’t also considered a similar makeover. While the addition of colour does reduce visual monotony, it doesn’t make the habitat seem any more inviting to wander through its macabre halls either, in ways making me too anxious about taking any further steps forward unsure about what oncoming surprises will be sprung up on me next. 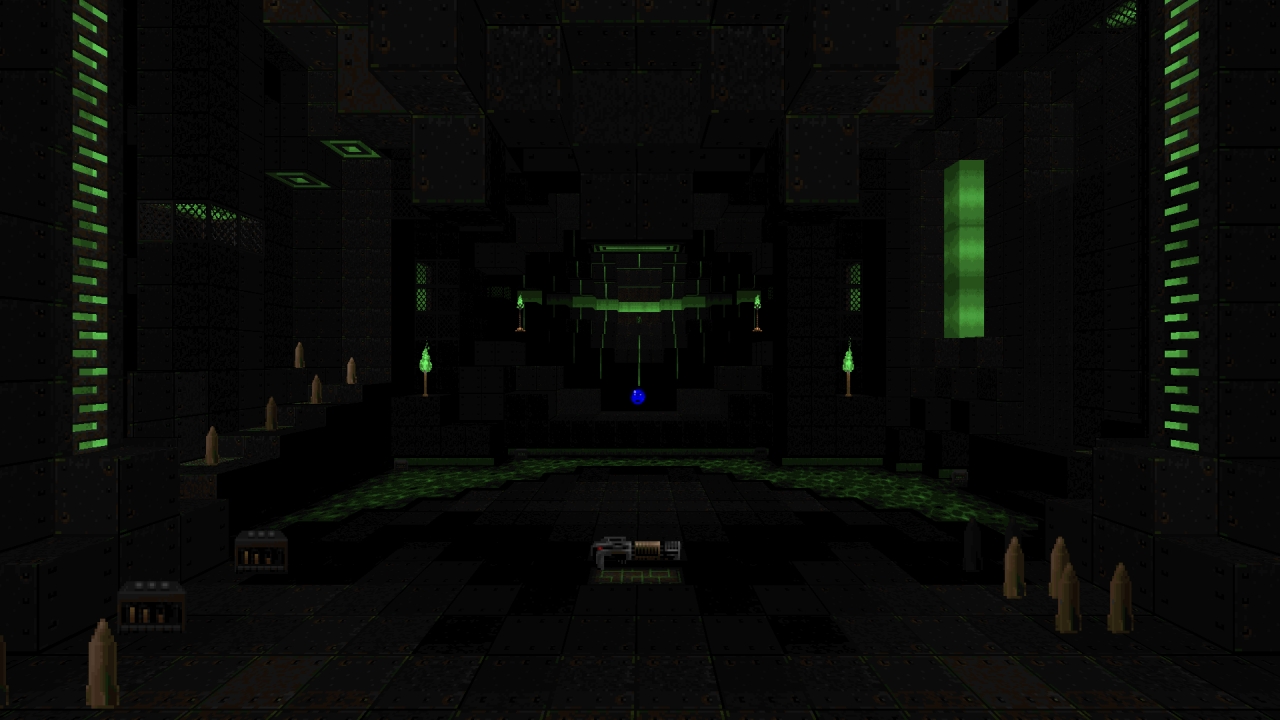 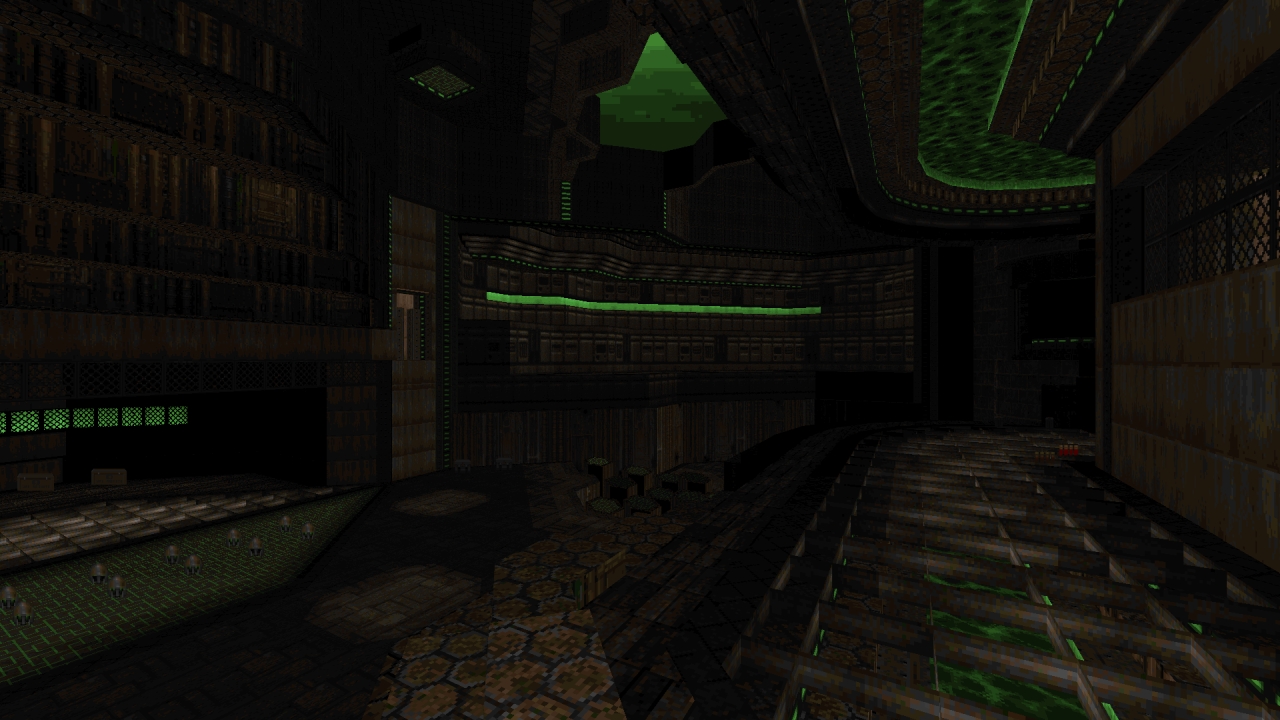 Tourniquet understands how to put pressure on players, consistently putting them into these disadvantageous positions that encourages both smart tactics and brash recklessness to survive the oncoming ordeals. Whichever road is taken be sure to expect something fierce ready to pounce at a moments notice from brutal ambushes locking players within a gauntlet, to nail biting skirmishes against swarming hordes while juggling for territory. All this is achieved through excellent monster placement where specific roles are assigned depending on the scenario and the effects this creates when put alongside other groups. Highlights include when enemies are assigned as area denial. During the red key retrieval, an elevated Archvile would cause problems if I allowed the wall of Mancubi to swallow up the available space and push me back into its sights. This in combination with avoiding the angry jeers of Hellknights and a Cyberdemon on higher ground reducing my movement options. Similar to this are the Revenants guarding a green key who rain down hell only as a means to distract from the actual main threat pouring in. Congestion therefore becomes another hurdle players are expected to deal with what tools are available considering the BFG is not available during normal progression. If one seeks this weapon the location must not only be discovered but also conquered to earn the prize. Another highlight was the tower fight which doesn’t shy from combining several aspects players should have experienced up until this point into one multi-staged finale, a chaotic onslaught involving monstrous waves flooding the arena expecting target prioritisation, infighting and fast reactions to an ever changing battlefield. 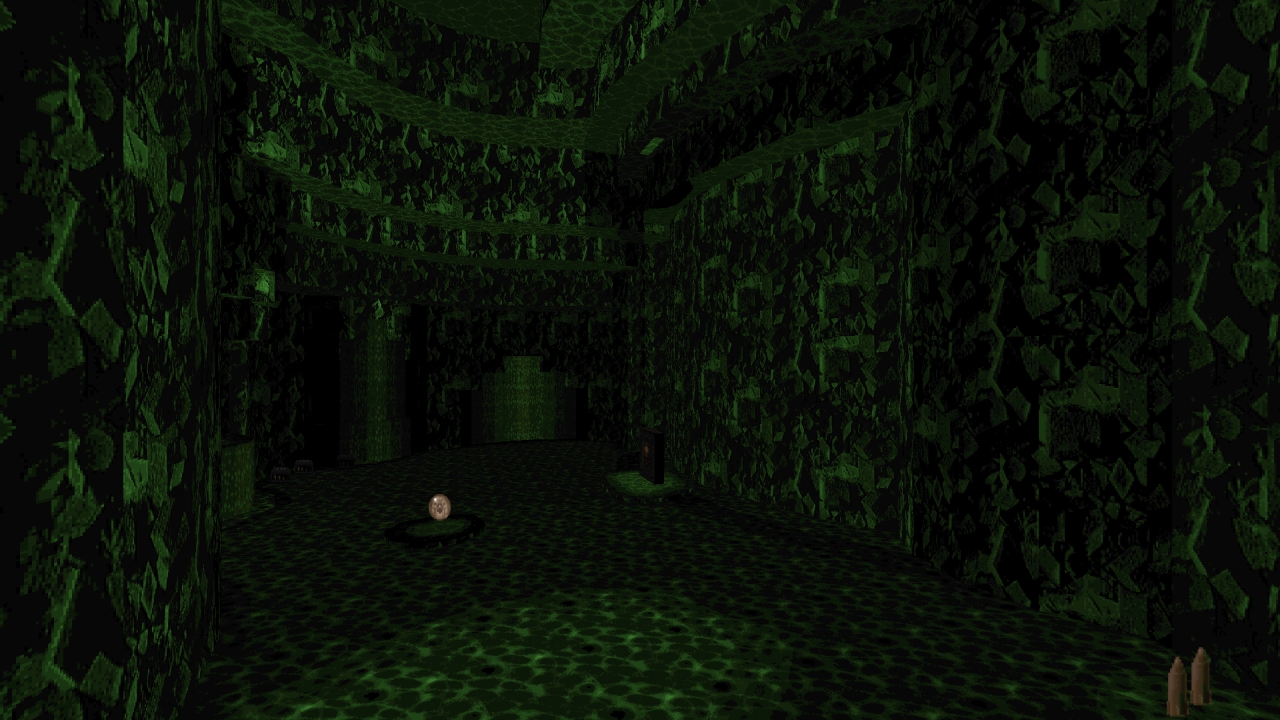 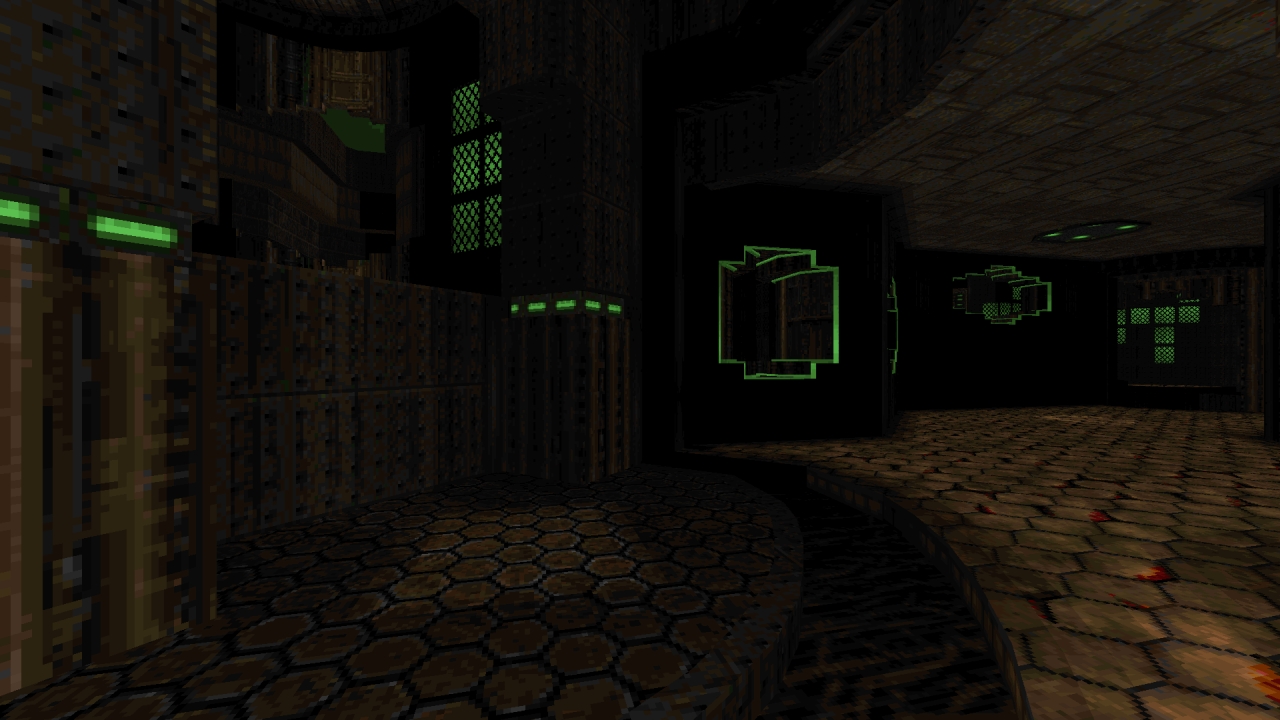 Even without the BFG there is still a full weapon roster available to otherwise gather up with just enough munitions that it encourages players to switch between their choice of firepower and not make too many mistakes just in case those rockets could be better spent elsewhere. Multiples of the same weapon also exist along alternate paths like an SSG found in either the upper western portion and guarded in the central area to reassure players their choices won’t cost them to miss out. Taking time to gather up gear is a good call and essential for tougher scenarios later down the line yet simple exploration by itself can be dangerous too. What few switches that exist are devious little devices luring in unsuspecting players whose purpose is not exactly clear until it’s too late. Entire walls will drop, transforming the surrounding architecture, to reveal potential threats behind them, an obvious trap holding powerful artefacts or a whole new scene beckoning to step inside and wander its depths. Not every enemy is thrown upon players in an alert state either, sometimes exposing a new area with dozens of foes with their backs turned leaving initiation down to a single gunshot. This aspect to gameplay is quite mischievous on Tourniquets part since there was only myself to blame if plans didn’t go accordingly and losing an easy advantage. 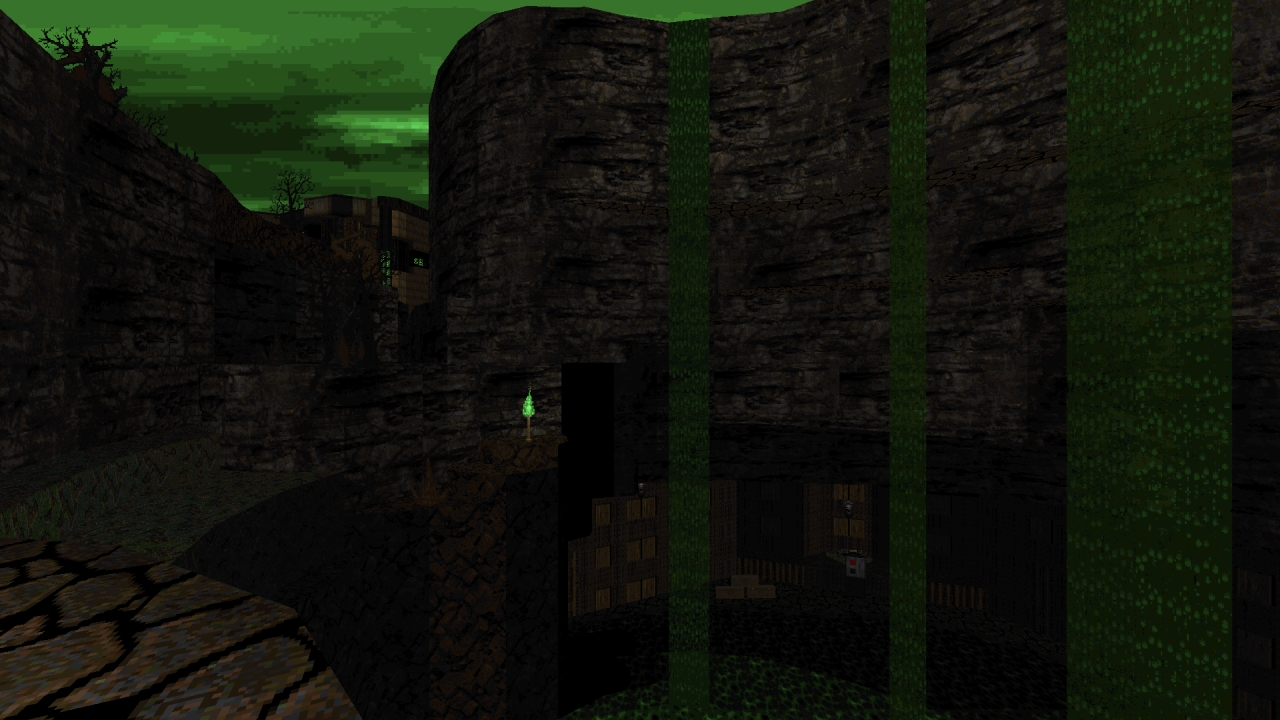 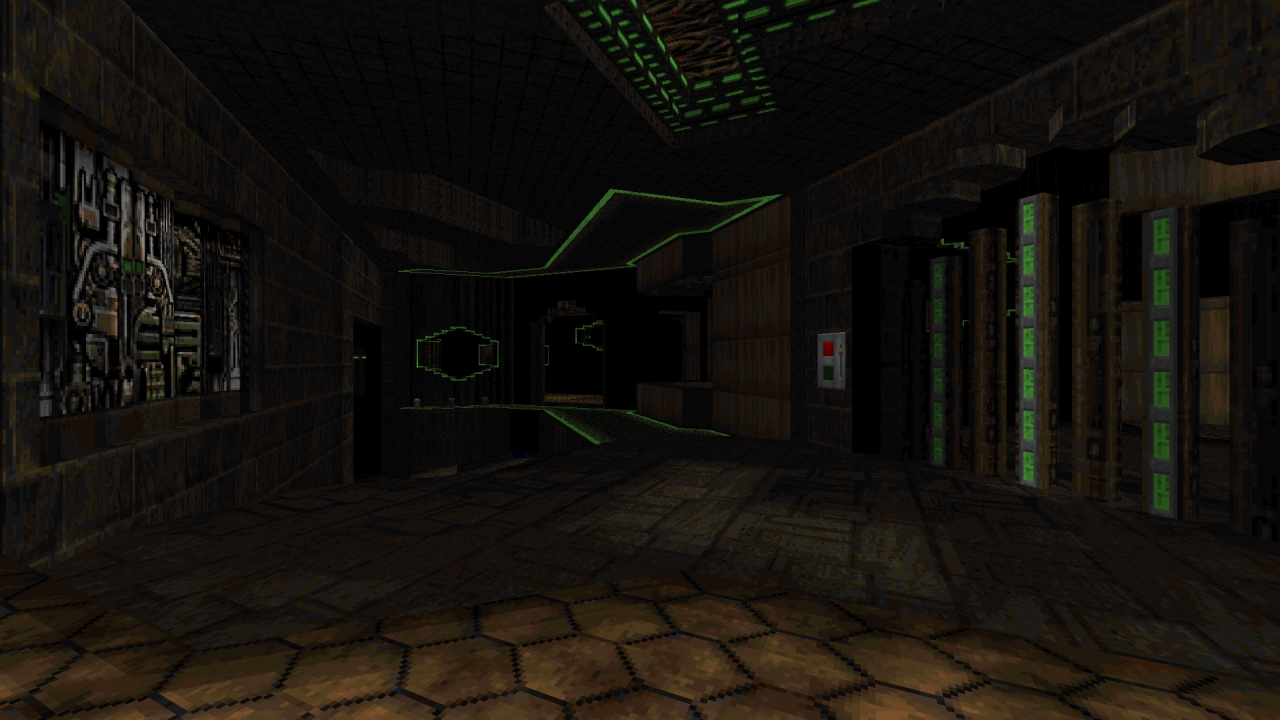 Overall difficulty across MIASMA will definitely vary between set pieces based around what order these challenges are tackled in and the supplies gathered up until these points. Should one fight feel dire there’s no doubt it could, quite literally, be approached from another angle later on after dealing with lesser dangers by comparison. The most difficult battles however are optional affairs left for thrill seekers and completionists. The level’s non-linear nature also means certain paths can be ignored entirely while important milestones are locked behind barriers requiring keys to create a general sense of pace despite the apparent freedom, where only two out of five keys are absolutely necessary for a normal start to finish playthrough and narrowed down to one key for those who excel at exploration.

MIASMA caught me by surprise due to its ferocious combat that punishes mistakes and ensuring I had an unpleasant time struggling to push onward in particular scenarios. Except I continuously persisted since the encounters always remained engaging enough to eventually conquer them to see what else hides within the madness. There are many sections that can be easily missed if players aren’t willing to explore beyond the paths ahead of them. I also adore the visual style, from its twisted metallic impressions right down to the bleak atmosphere and striking green colour palette.