Having survived the initial blast, Duke continues towards the epicentre of the disaster located right under a local venue named, “The Kompleks” too seek out and destroy an alien doomsday device causing these disastrous earthquakes. There isn’t much time left until the weapon finishes recharging for a second more devastating blast, all while a constant assault is sent after Duke by their mysterious leader Froyd Eenakee.

TRAGEDY is a direct sequel beginning right where players were left off in APOCOLLAPSE as Duke enters a building known as “The Cool” to continue the journey across Emmerichville’s former streets toward his main objective. As the second entry in the SHAKY GROUNDS series, Merlijn had quite large boots to fill in terms of expectations considering how grandiose of an entrance sequence the first level began on, including later impressions upon emerging from beneath the hotel rubble to witness the earthquake aftermath. The visuals were fresh, vistas were excellent and an atmosphere consisting of sheer dread backed up by a great ambient music track. Not comparing the two levels is a difficult task since both could easily be stitched together and feel coherent without many problems. Unfortunately I don’t believe TRAGEDY quite manages to reach the same heights this time round – and that is still fine. The sequel manages to piece together an excellent collection of scenarios, shaking up the experience with ideas of its own while improving in other areas such as combat during large scale ambushes and an increased attention to interior design. 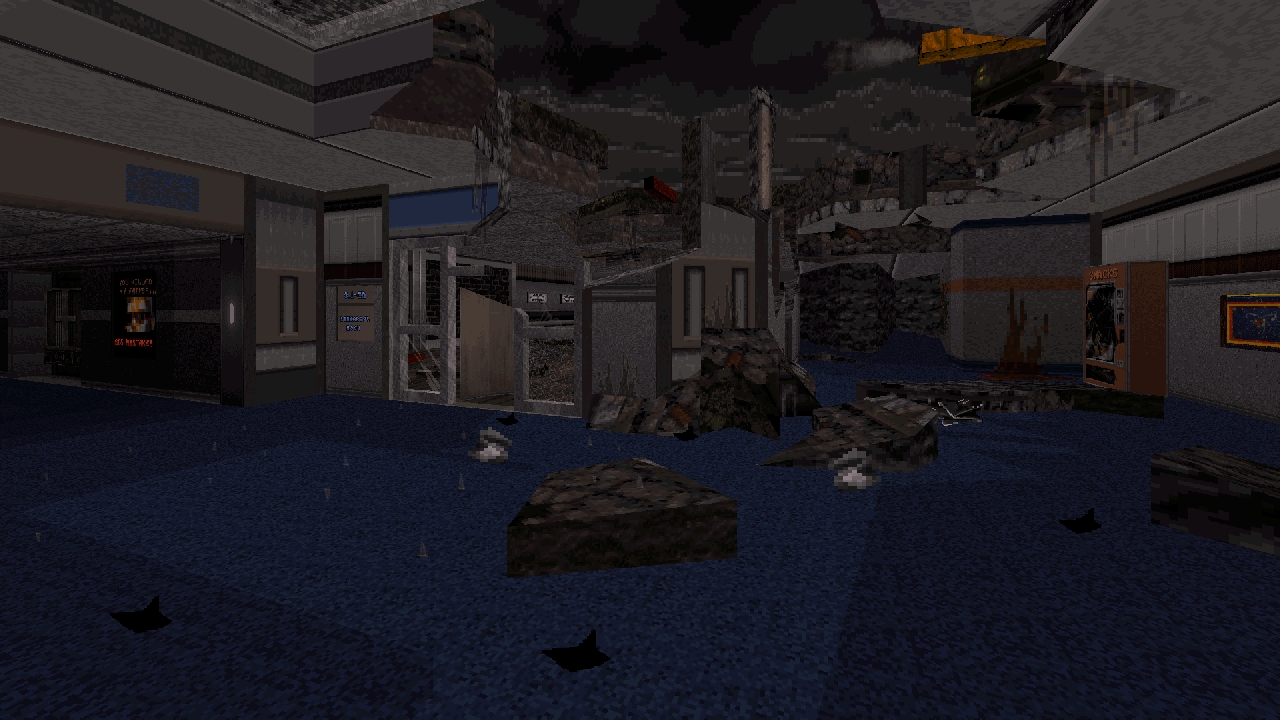 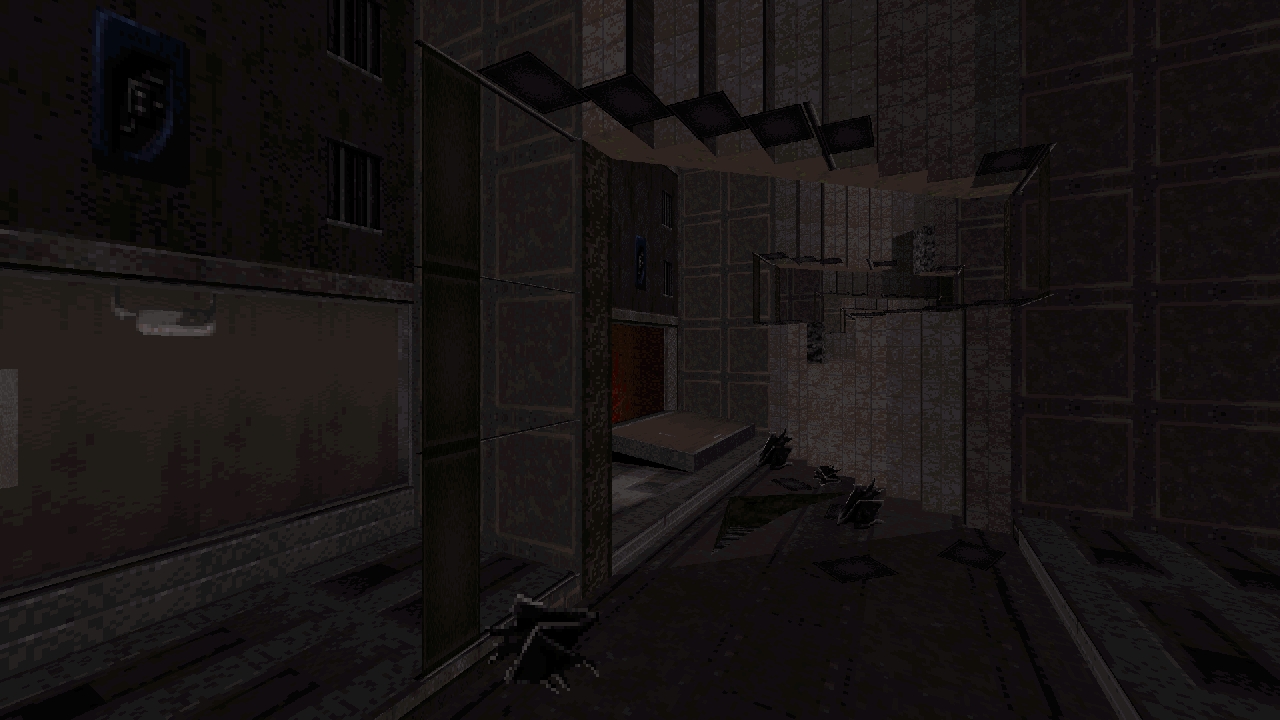 One clear contrast between both levels is a shift toward having players remain indoors for the majority of playtime, in particular “The Cool” is a large building consisting of a ground floor theatre hall while upstairs holds various practice rooms dedicated to music sessions and performance arts. Despite these interior spaces Merlijn doesn’t detract from having a fluid layout where entire side sections can be missed out leaving some nice surprises for later upon replaying the level. Another creative idea was having players navigate through a building collapsed onto its side involving a disorientating twist in perspective. It did take a short while for my brain to acknowledge what I was seeing while walking along the walls and stepping over doorways. The stairwell worked especially well in the visual department in what I’d assume might have been a gigantic nuisance crafting convincingly from this angle. Another twist I liked was discovering an alternative use for a certain keycard, figuring out how to keep possession of it until then. Exploration as such is another important factor here which doesn’t shy from hiding all sorts of useful trinkets inside optional rooms or tucked away into secret areas. Players can potentially acquire every available weapon if enough effort is spent to search thoroughly for them. 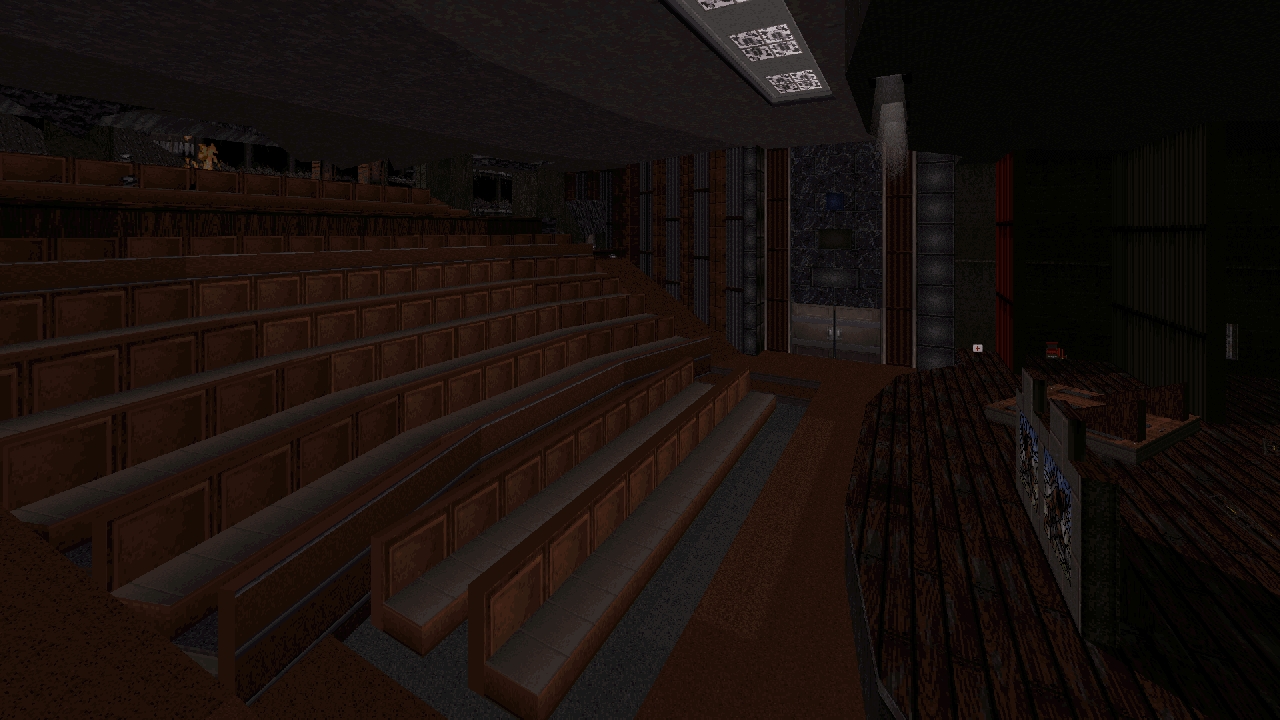 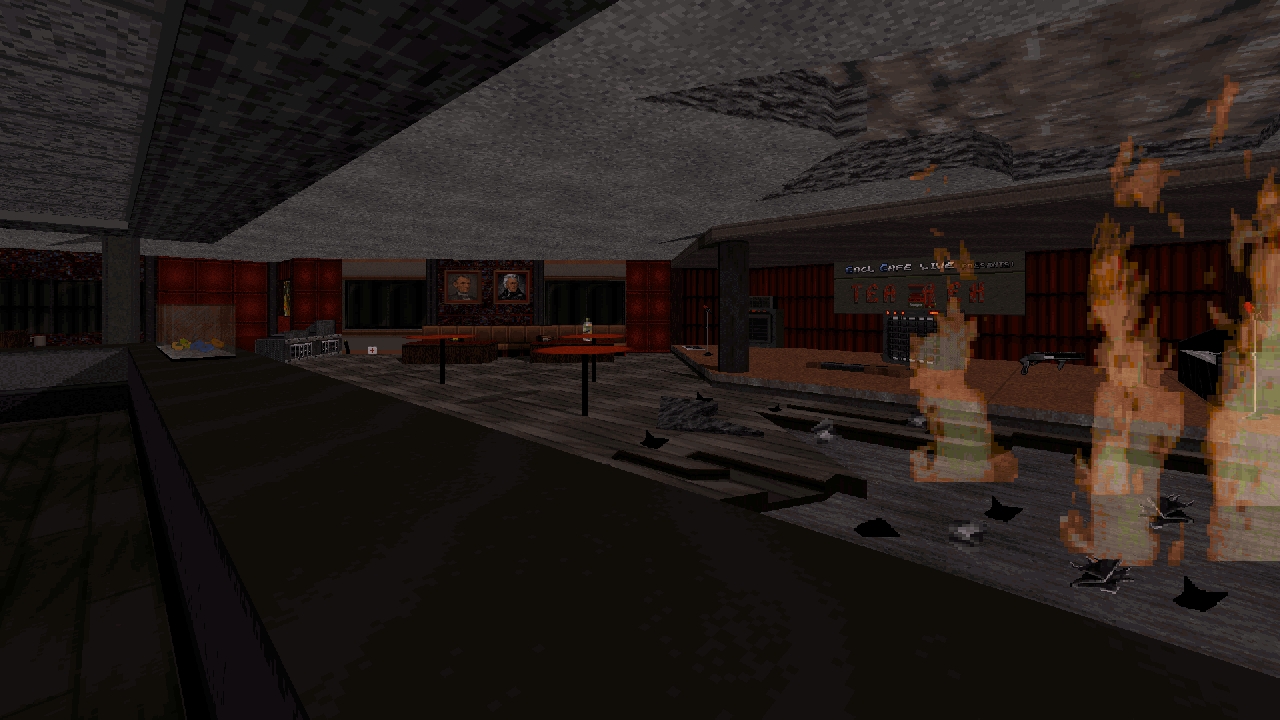 Combat is more personal involving skirmishes at close quarters dotted around the area where every turn could hold danger nearby. The action side is much easier to conquer this time round, not having to worrying about alerting too many threats all at once around the initial city section during APOCOLLAPSE. The only trouble might be when Fat Commanders are involved. Many times it can be hilariously beneficial to keep them alive to trick them into killing their allies, a risky move since their presence does not discriminate from being indoors having had a few close calls myself. The only concern regarding enemy placement were the spawned Battlelords in a later city section becoming ineffective if players remained safe inside one building while next door isn’t. A possible fix here would be having the windows breakable or perhaps the entire shopfronts destructible from mortar fire to force a change in tactics. As mentioned earlier, improvements to large scale ambushes has been achieved by breaking up the usual flow to create a dynamic scenario tossing in additional waves during its course. Depending on what enemies remain can change priorities. One fight, on a rooftop providing an overview of the plaza, drip feeds several flight based aliens all posing a danger in their own way. It’s a hectic yet memorable battle that lacks cover from projectiles, forcing good dodging ability while having a potential drop into the depths below increasing tension. 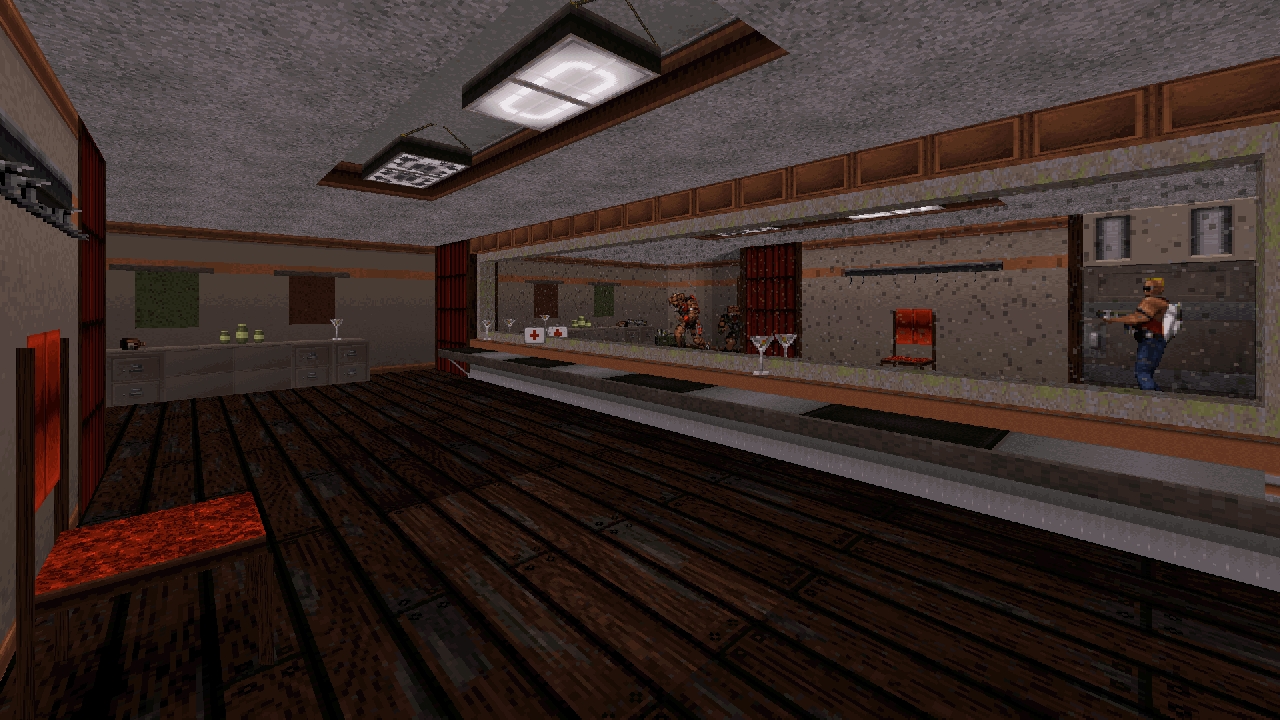 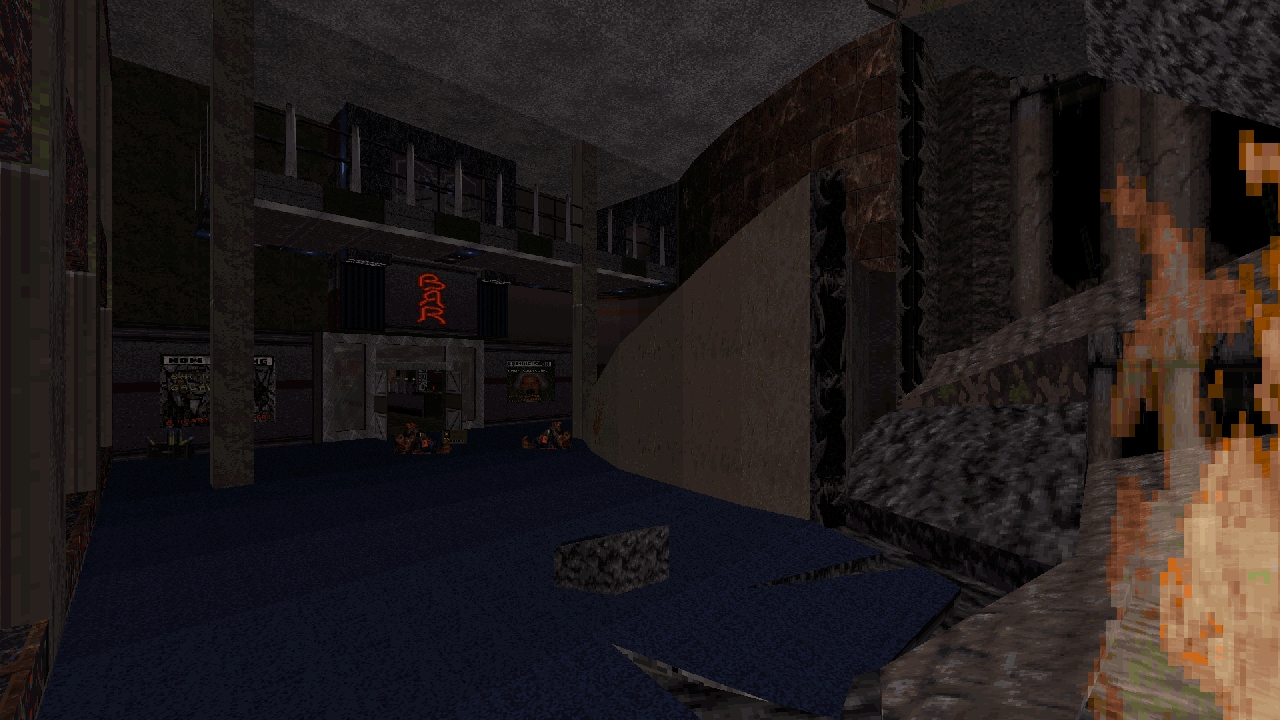 TRAGEDY as before still remains a visual treat continuing to depict mass destruction across the city using collapsed, broken buildings with gaping chasms splitting access between areas such as the central museum plaza and “The Cool” forcing alternative measures to get across. APOCOLLAPSE however had an overall stronger composition of vistas from the onset in almost every situation, while here the surrounding scenery appears simpler because there is less building shape and aesthetic variation by comparison. Interior spaces otherwise look great, there’s a clear attention to detail that realises how these spaces should appear based on their role. Decoration consists of suitable objects for their locations, such as stage props found in storage; guitar amps on a bar stage; to various uniquely crafted posters and signs involving humorous nods. There isn’t a moment that appears lacking, richly furnished and always something to pay closer attention to when exploring indoor spaces. Even attempting to grab a simple mug of coffee has Duke feeling relieved after all this stress weighing down on him.

Merlijn’s custom music track this time round takes a considerably more upbeat tone, using piano to create a funky sounding melody with ever slight signs of a darker tone hidden beneath it all, but otherwise remains quite chill across its five minute length. It’s another shift for the level creating a different atmosphere but not an unwelcome one either. Storyline additions are also made by establishing a feud between Duke and this new Cycloid leader who comes across as this cliched cartoon villain who doesn’t quite want to go all out on killing his nemesis and prattling empty taunts through viewscreen messages. He must be a coward in truth. Wherever the storyline goes, I half want to see Duke fail to stop the second blast if only to see the consequences and how Merlijn would depict this – perhaps even as an alternative “what if” additional secret level.

Although TRAGEDY doesn’t quite reach the exceeding impressions brought on by its earlier entry, it still remains a solid level on its own having players traversing through other sections of Emmerichville’s former streets not previously seen. The sideways building interior stands out for being different enough; larger scale battles were considerably more engaging and dynamic; and the overall level felt cohesive with good attention to interior decoration. The third entry should throw a wrench into the usual formula and perhaps showcase a larger influence of the aliens taking advantage of the aftermath. Infestation, growths and hives could be overtaking what remains to suggest Eenkee is already setting his future plans in motion after the next blast succeeds. Only time will tell once the third entry is released and I’ll welcome whichever direction it chooses to take.