Once Duke regains consciousness, he finds himself prisoned in a strange and scary place. He feels the heat of lava below and a foul stench of burnt corpses penetrating his nostrils. Surrounding him are similar cages situated above a molten pit, their residents now just charred flesh and bone. Nearby a cave begins to open. Angry growling echoes from the other side…

X64-2 has an unconventional start to a level, not solely because Duke is weaponless or finds himself imprisoned, but because of a sequence of events which play out and everything taking place soon after the initial Fat Commander reveal. An attempt at execution fails allowing players free reign going forward, resorting to a measly pistol pinched off a space marine corpse with a grumpy tubs in tow. Quite unexpectedly, Maarten managed to capture a sense of dread throughout this entire segment; first off by taking place inside an unfamiliar network of dark alien caves; secondly from the echoes of a monster stalking Duke and the few glimpse of it seen just ahead. There’s little respite to be had when its not entirely clear what our path forward leads to, mixing tension and frantic retreats simply due to lacking equipment. I really appreciate the setup here having recently replayed this level since its initial release. 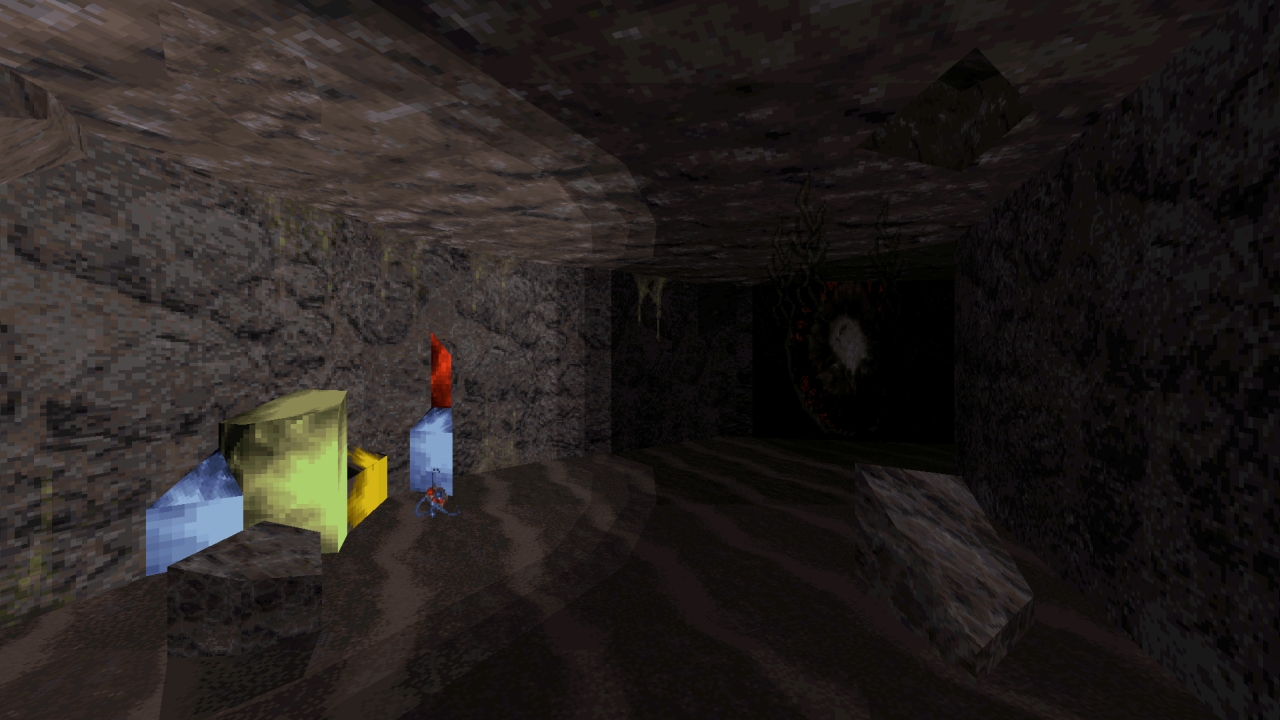 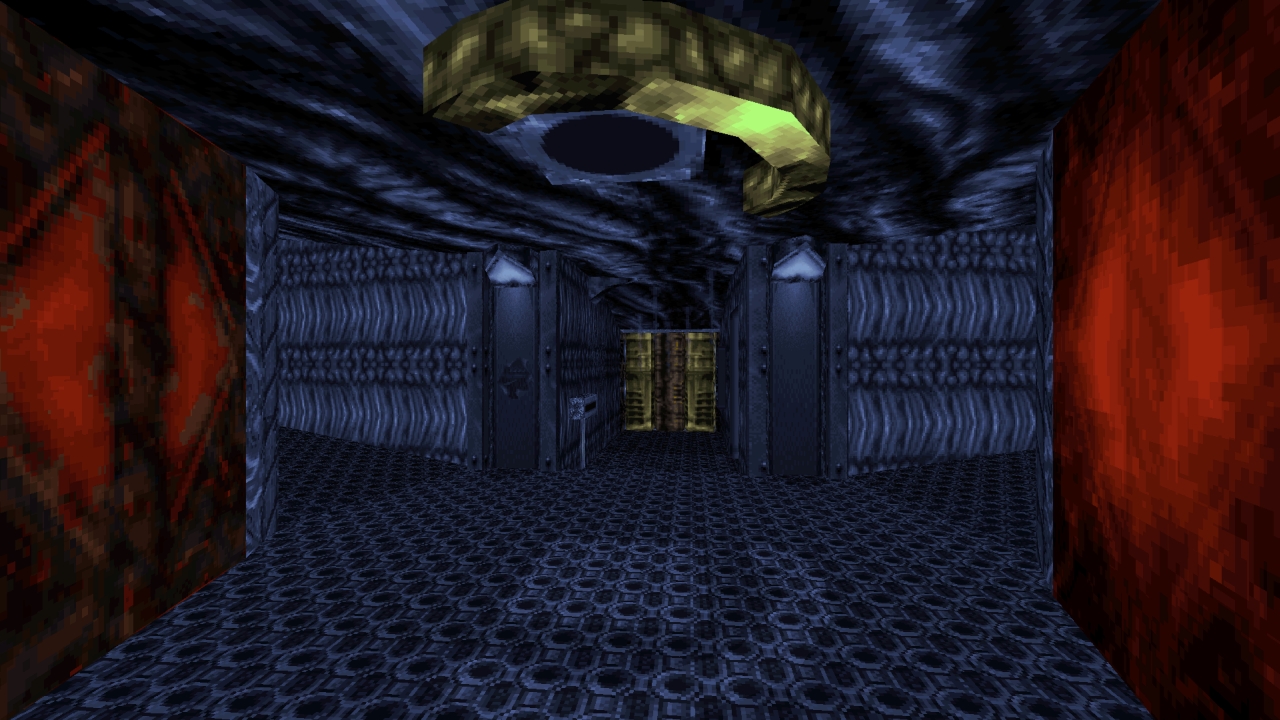 Once freedom has been granted from the confines of eerie caves welcomes players to much larger outdoor spaces to explore. That alien planet setting is now in full swing here. An organic floating island, bizarre fish creatures soaring through a green cloudy sky, and hints of weird technological equipment buzzing out some functionality. Who knows what any of this stuff does! Combat from here can be a little rough now the aliens are aware of the escape attacking with stronger forces in high numbers. Interiors have nastier encounters though, often close quarter scuffles against several hitscanners at once, mostly boiling down to the tight healing supplies limited to atomic health powerups at few opportune times. At least with this its clear hitpoints may potentially hover above the usual one hundred, assuming care is taken of course, except it also allows Maarten not to hold back on enemy distribution. 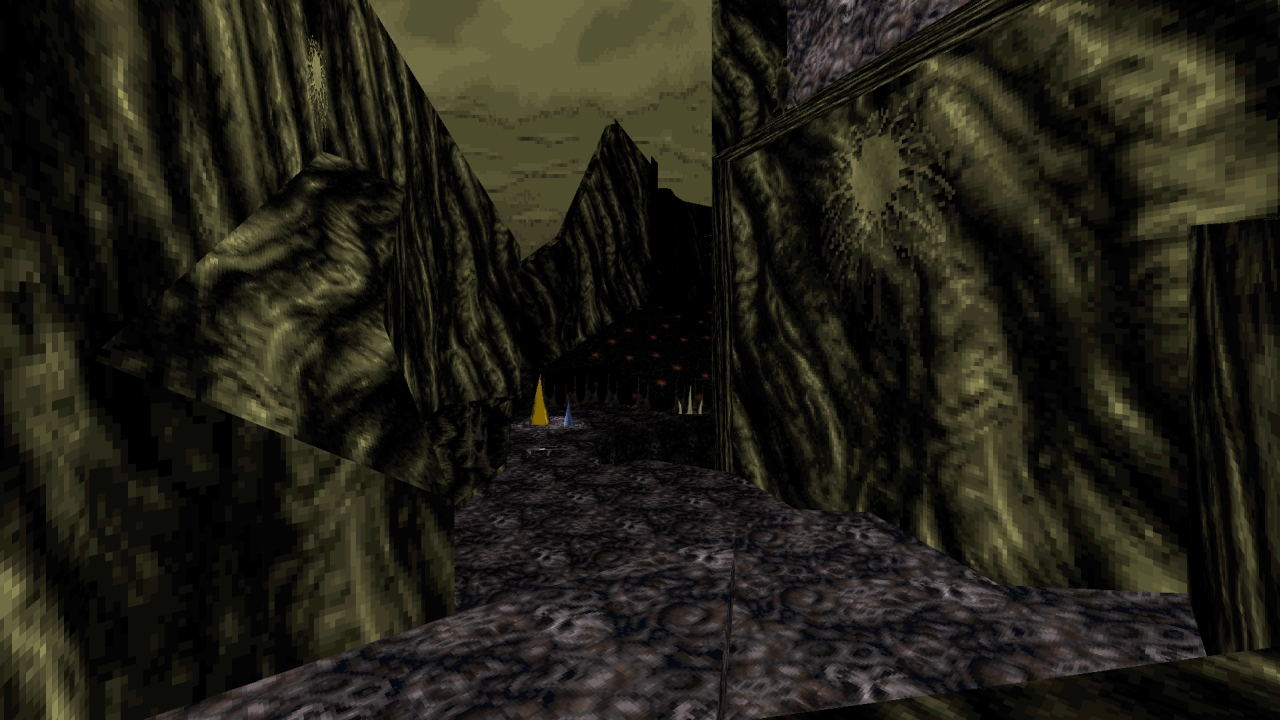 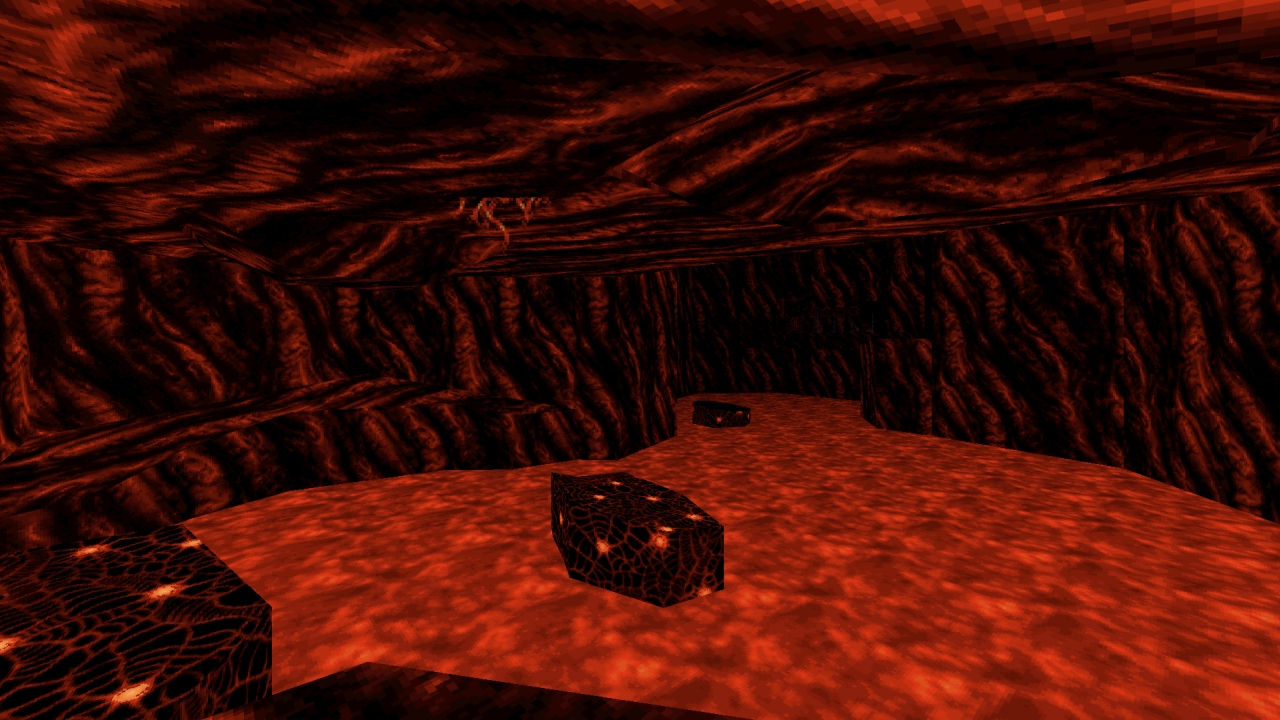 X64-2 is a very hostile planet and won’t let their guests leave without a proper farewell. Despite its second half being heavy on action there’s plenty of variety to break up the flow. Exteriors are standard affairs but interiors can be brutal. Ambushing points and devious traps loiter hallways up ahead each one different from the last. Setting off the alarm caught me off guard when a decent sized security force busted in. Certain routes might lock you inside until completion of that section. Another, which I especially liked, had lights switching off one by one before any immediate threat. Some areas have a creepier tone usually created via sound triggers as players explore them. Sure enough these aren’t effective on their own but Maarten might choose to follow up on these cues. Walking face into a near invisible Protector Drone suddenly changes my perspective to assume anything could happen next.

Divided into two very distinctive parts, starting off with a frantic escape sequence through an eerie cave network before heading into a combat heavy scenario against the planet’s security force. A straight forward adventure with varied encounters, X64-2 should keep players on their toes when exploring this hostile alien environment.