BAUHAUS takes you on a journey across a series of four levels inspired by an art movement and school started in the 1920s. Modern architectural designs and twisted halls of physical fine art takes the spotlight. Hostile engagements around open areas will be constant, dangerous ambushes await in enclosed spaces and anything could be lurking beyond that next corner already alerted to your presence.

The first level is an easy and calm introduction holding back BAUHAUS’s punches until much later, so don’t expect any crazy surprises yet. Just three large buildings within a natural enclosure and in addition, three coloured pillars are located at the centre of this rural area preventing access to something important. Our goal should be clear upon seeing this, requiring little more than infiltrating each surrounding building to pull some levers. But enemies don’t exactly put up much of a resistance however, mainly a few light scuffles against small clusters and an odd few Imps being a nuisance from afar. What does stand out is visual design, depicting modern architecture with bold, clean outlines complete with rows of glass walls. Their interiors however don’t have your typically defined living spaces, merely concepts relying on colour and shape for appeal. 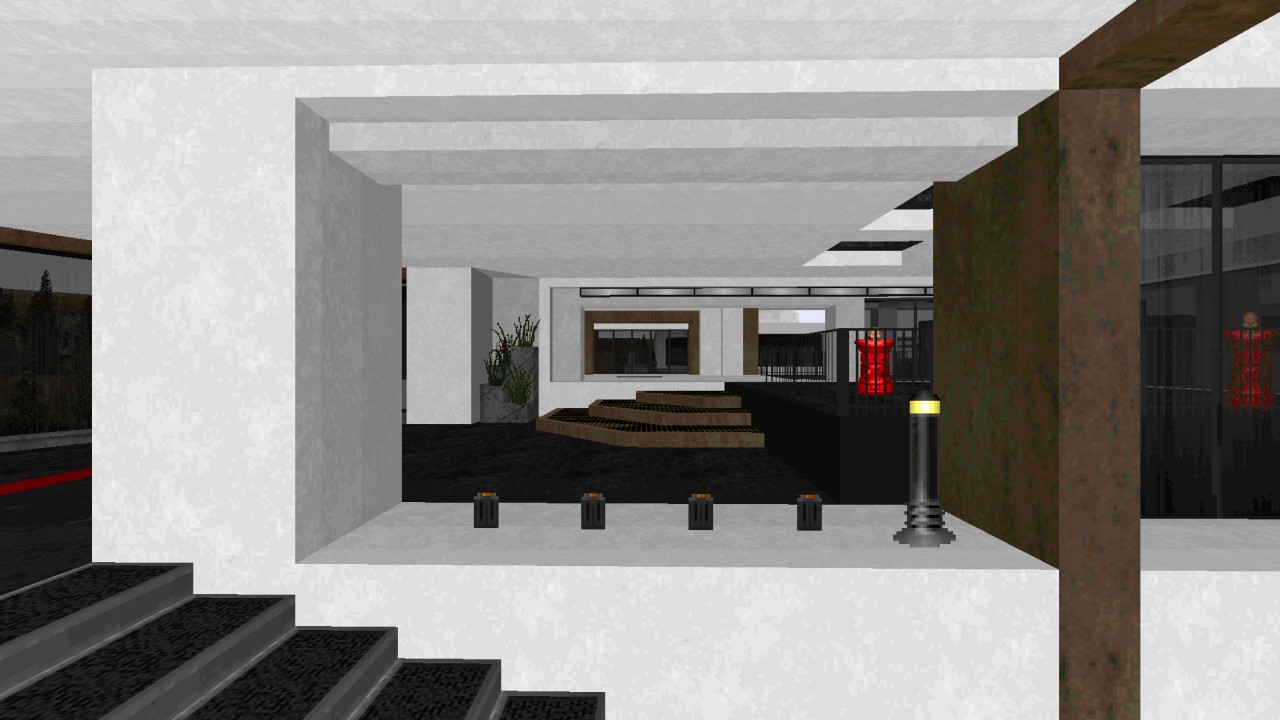 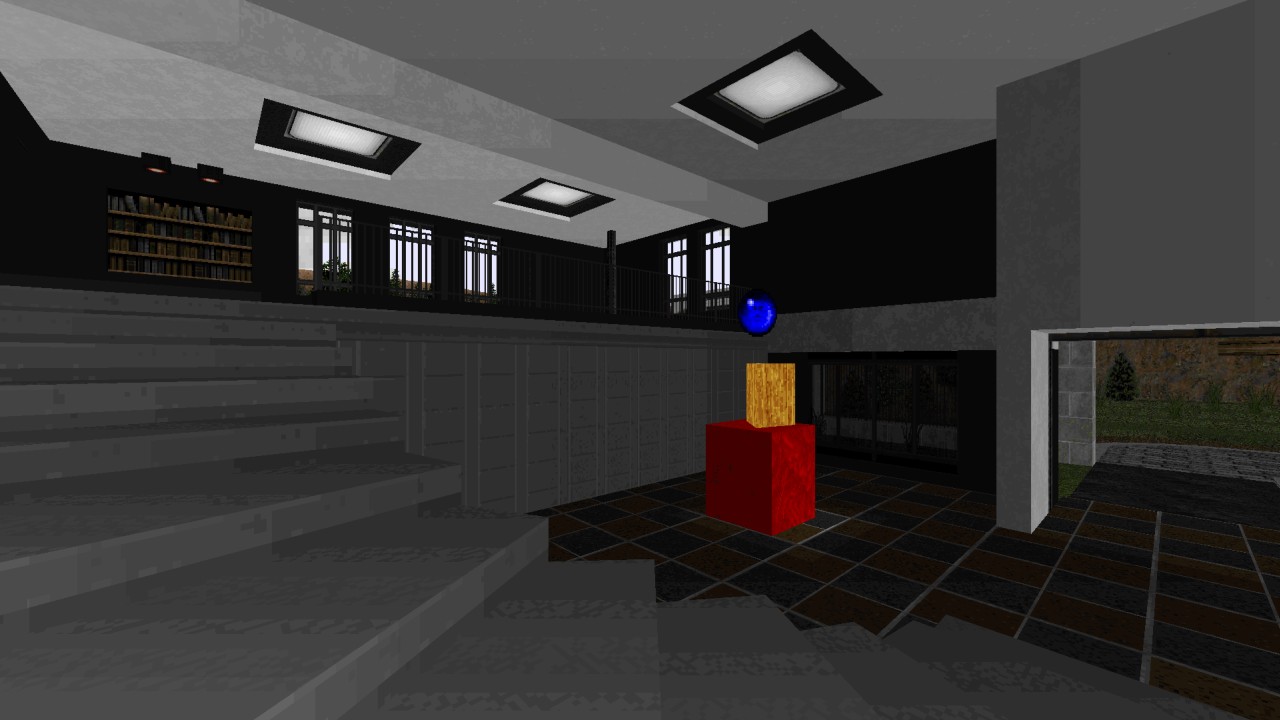 From here players should receive a better understanding how the rest of BAUHAUS going forward will play like, where seemingly normal places don’t actually function as one should expect. Layouts are simply made with fun in mind. They’re focused primarily around exploring different routes, whether those lead to dead ends or higher positions. Take the starting location as an example, at first a small area made up of coloured blocks only to later find walls segments breaking away changing the space we’ve already occupied then throwing some fights our way. The second half may appear to be a mansion, its interior design is similar to those from MAP01 except on a larger scale, but certain sections can only be accessed via different staircases. One only leads to two balconies. In a real world place this layout probably wouldn’t work effectively, but fits right at home here. Combat topside is slower paced where groups of fodder either roam around freely while tougher brutes take guard in specific positions, some of which can be seen through windows in advance which is a nice touch. 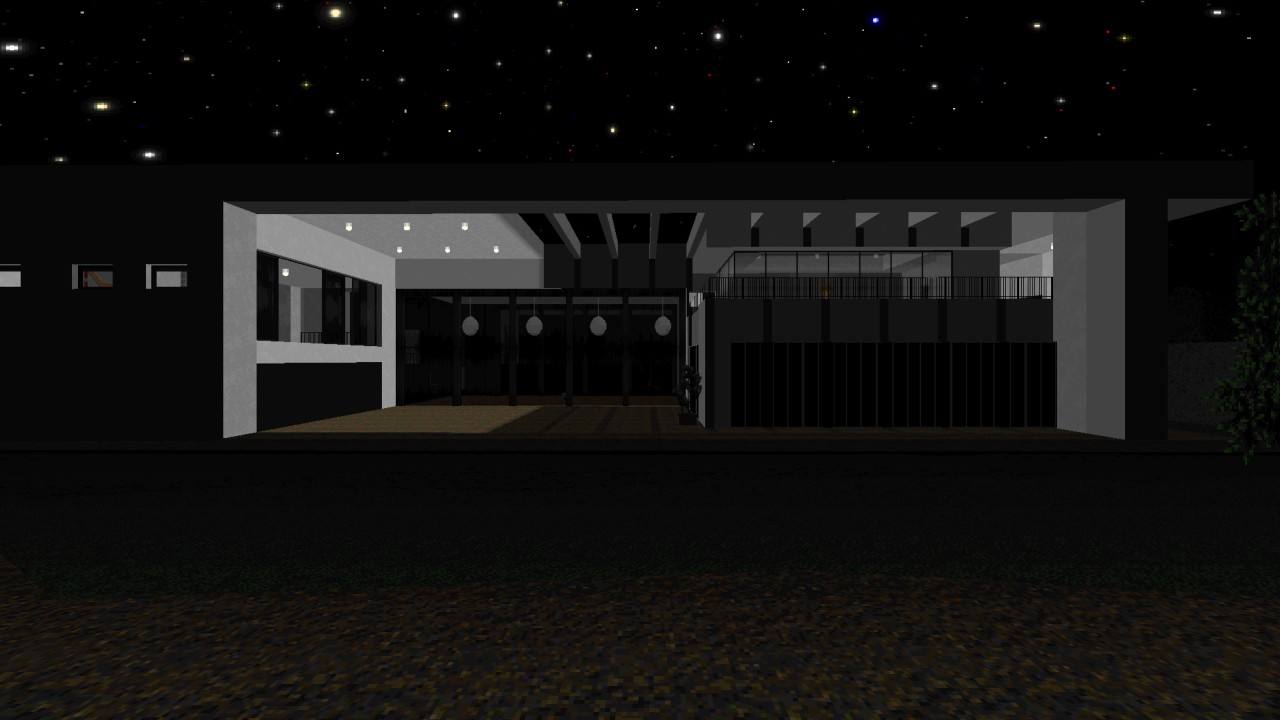 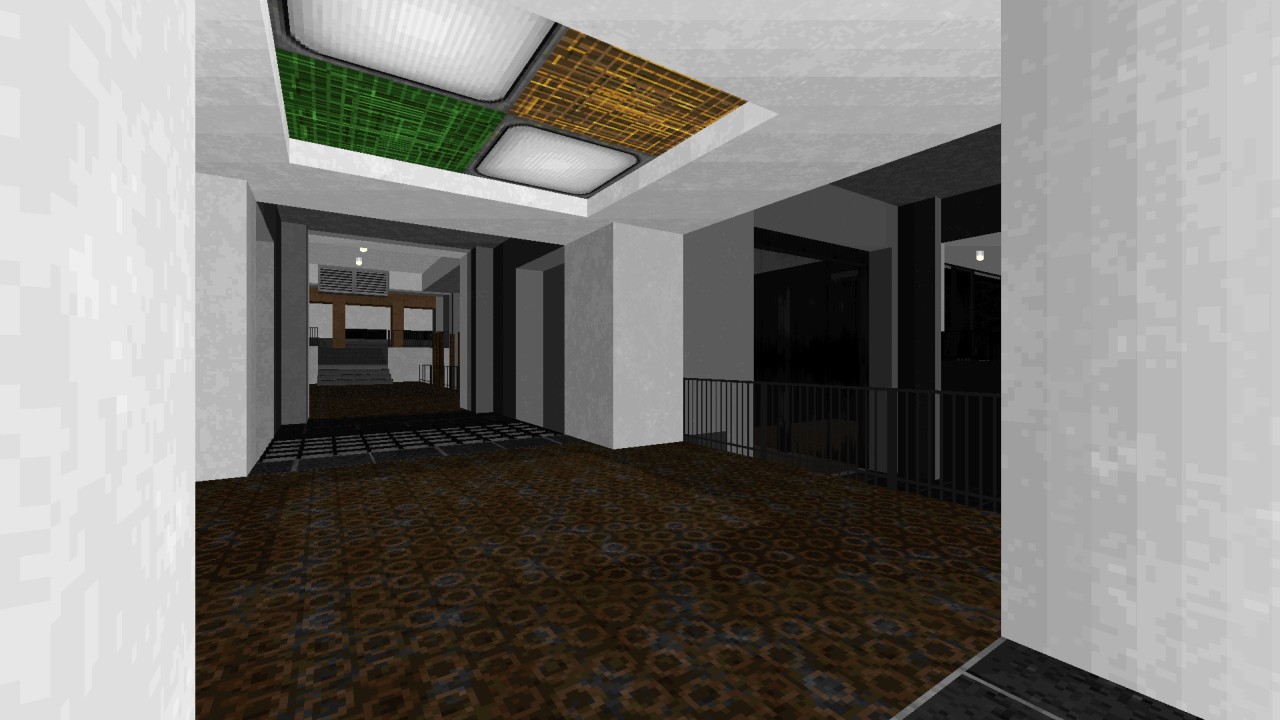 Not depicting any particular theme or location in an easily recognisable form, it becomes apparent those Bauhaus influences are taking giant strides here. Room shapes and height changes become more varied, except less logical and more about having fun with the level layout. This in turn helps to dictate gameplay, especially once these spaces open out when progress is made, further connecting areas between each other. MAP03 increases its hostility by luring players into larger ambushes, but never once puts them into unfair situations. Ammo and health are plentiful from pistol start, but snatching up weapons might require some dodging. Foes take the higher ground no matter how little difference that might be, more often our zombified hitscan friends taking pot shots while Imps and Pinkies distract their prey. Despite the action picking up quickly there is a smooth flow to the whole thing. This including what few Archviles that exist, all tame encounters even on the UV difficulty, either limited to an incredibly small balcony or few corpses to resurrect later. 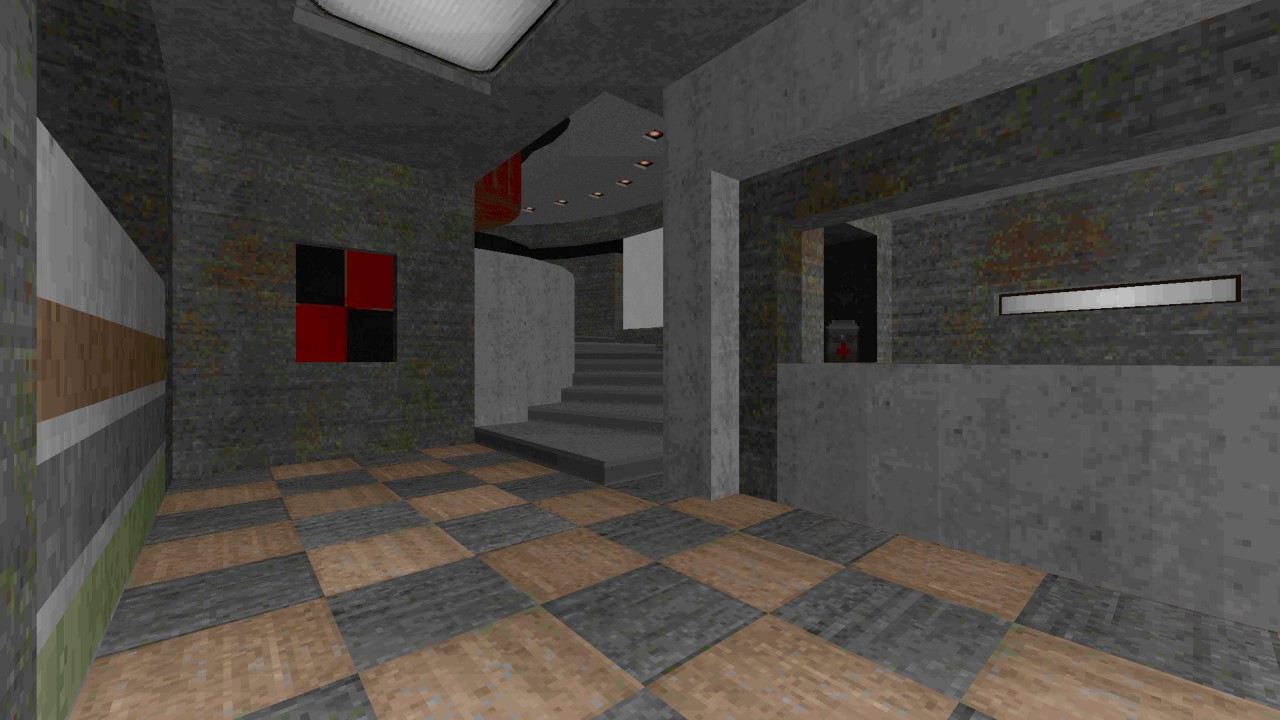 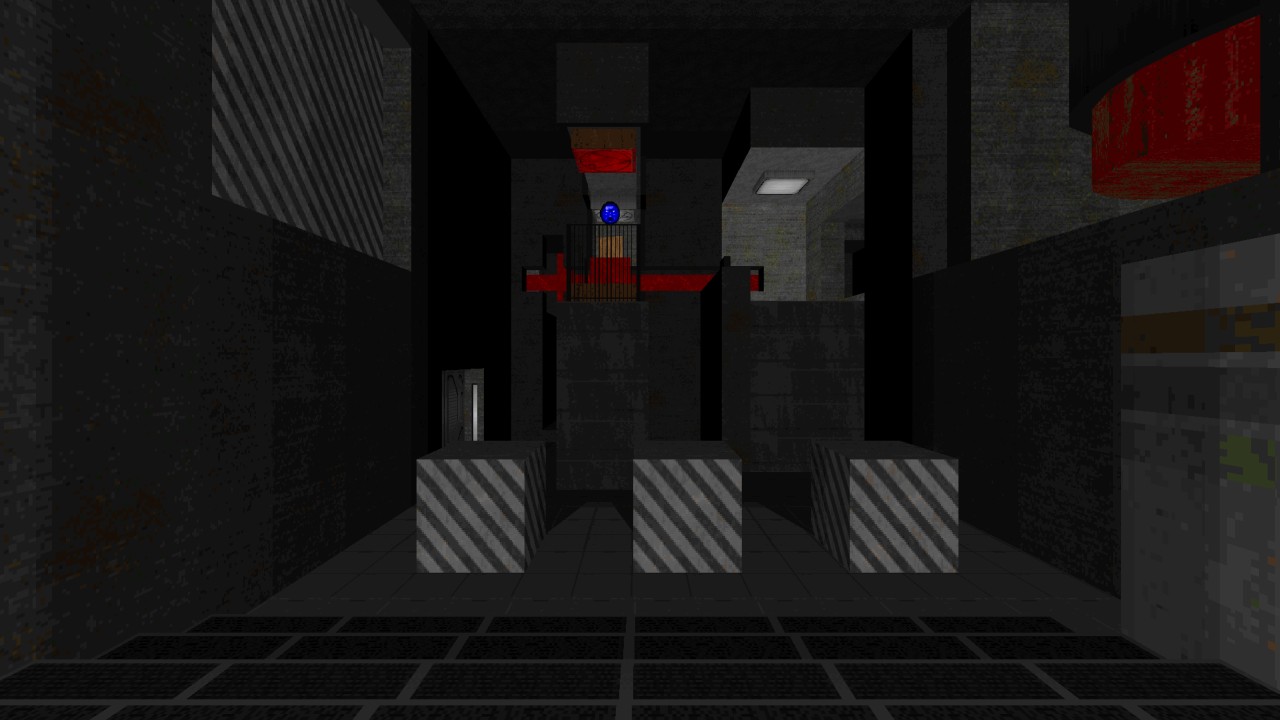 BAUHAUS finale decides this time it wants to be different from the other three levels. Design for starters uses a darker palette to allow brighter colours to stand out. At times these halls feel foreboding, especially when passing by those garage-like doors which may or may not open just yet. Gameplay on the other hand changes up the pace, opting for a non-linear goal allowing players a choice between four distinctive routes. Each one of these bears a singular letter block, all four required to spell out the word “EXIT” to unlock our path to freedom. Besides both “X” and “T” sharing some functionality between them, all pathways are self contained sections which can be tackled in any order, whether to solve them or clear out demons. “E”, “X” and “T” are small romps, but “I” is quite sprawling. The halls here loop around revealing many lifts which provide further access to upper and lower levels, creating some rather hectic fights whichever direction taken. I’ve actually found myself occasionally lost, specifically around “X” before giving up to explore “T” until realising the two were connected in some way. MAP04 isn’t exactly a maze but there can be a lot of ground to cover, doors to unlock and moving platforms to discover. 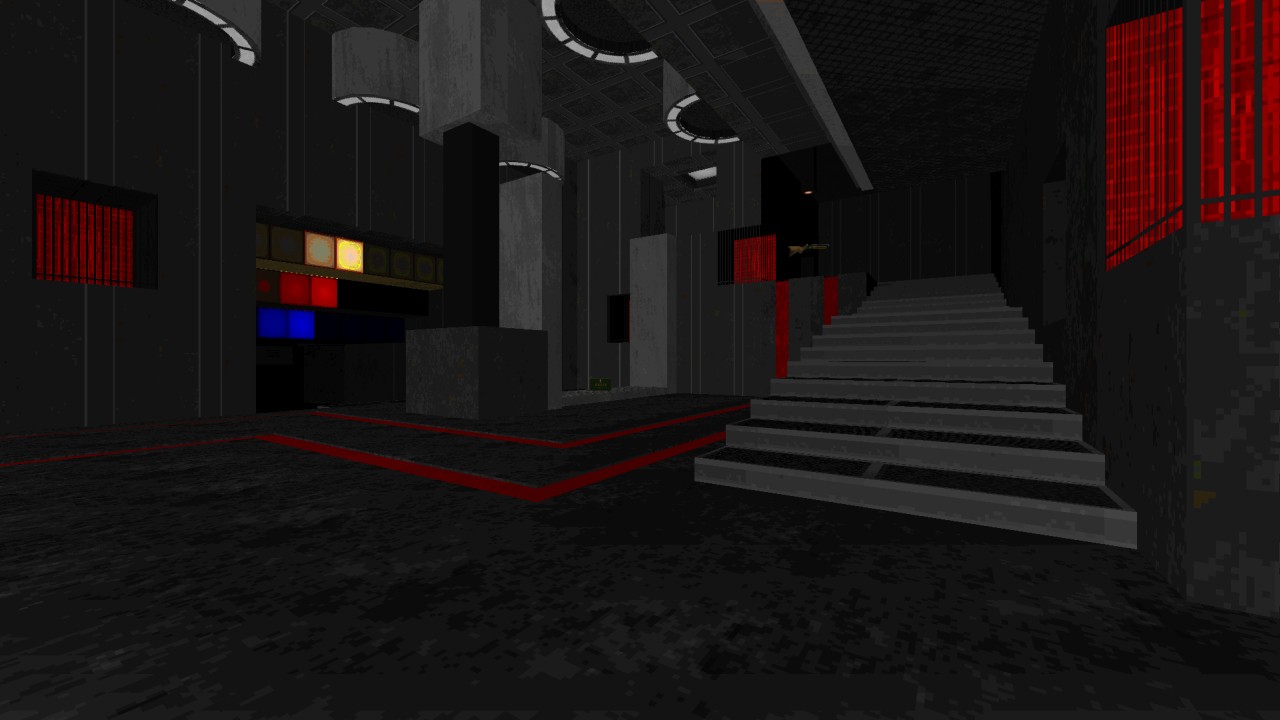 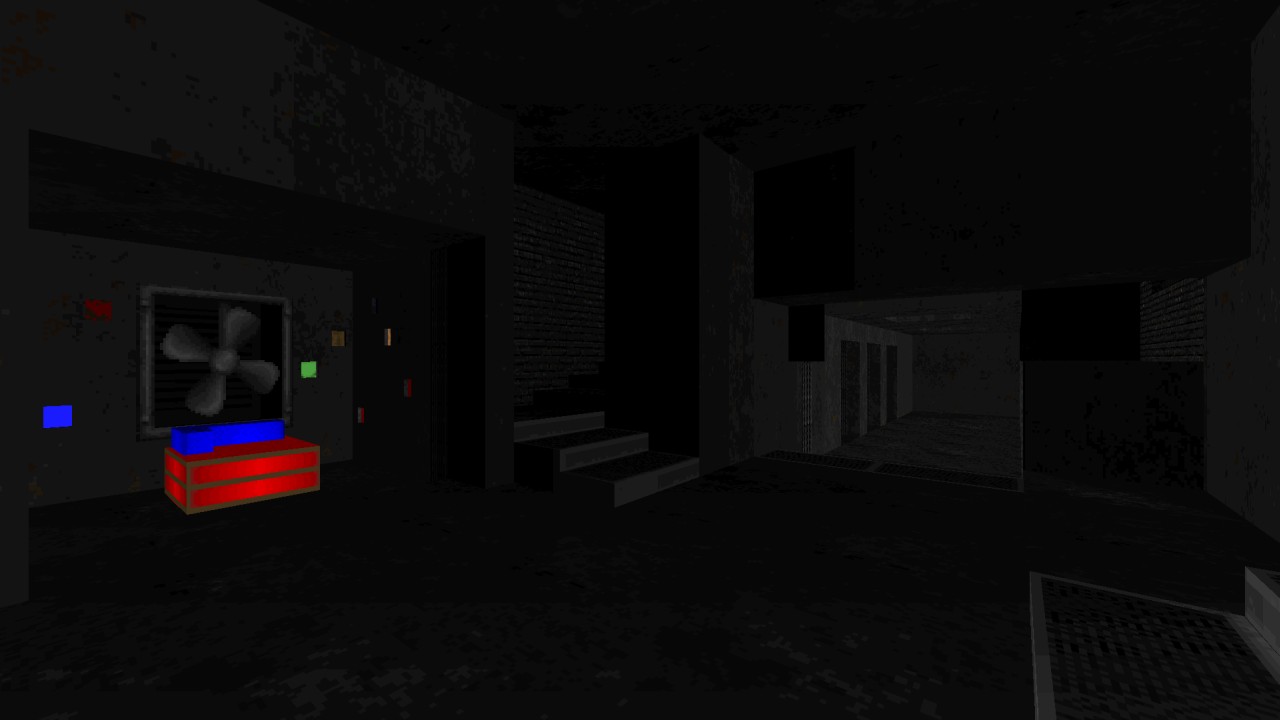 By focusing less on creating places which make sense and just having fun with layouts, a lot of these environments are suited well for enemy encounters and exploration. The Bauhaus influences spice up the visuals in unique ways, not being tied down by theme choice with more focus on shape and colour to break up the levels. This in turn is exploited for gameplay to keep us guessing during first time runs. Tension may escalate by MAP03 but thankfully avoids turning into another slaughterfest.

One visual component I enjoyed is the overall consistency for gameplay elements across the four levels. Texture choice for switches and moving platforms remain the same every time so that locating these isn’t a chore. Another is that Soulspheres are always situated above pillars unique to them, easy to locate but accessing them is different every time.

BAUHAUS as a whole is a great set of levels, but MAP04 quickly became my favourite for its gameplay alone, figuring out each pathway with something new happening depending which letter you’re aiming to recover.