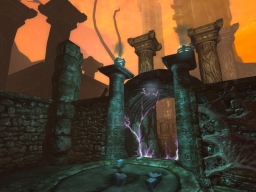 Introduction
Through the Portal is a continuation of the story, taking place a mere few seconds after the end of the game, whisking you away on a journey into a realm we never got to see beyond the portal to find out more about the secrets and mysteries we have come across thus far.

Review
During the last few moments of the original game, there were three different choices the player could make with how they deal with Alexander, each of them producing their own ending. Through the Portal assumes one of these endings and takes you on a journey to the other side of the portal which we never got to see, presenting the author’s own impression of what possibly lies beyond and experience what is there. The first sight to see is a great choice, already providing the player vital clues that the place they now currently stand is very different from before. Another good indication is the use of outdoor locations, already defining itself by adding something we didn’t get to experience much during Amnesia, and establishing an otherworldly atmosphere at the same time to fit the theme. It’s a two for one deal here. 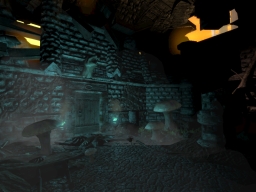 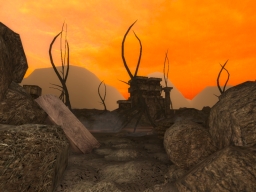 The lighting is a key area that caught my eye as being generally pleasing, while also providing an ample amount of illumination in most areas to save myself scrounging through the dark. I almost never had any problems exploring because of this, but there were the odd spot here and there where a lantern could have been handy. The biggest concern was a cave section where the path takes a sudden right turn, which was hard to see. I resorted to hugging the walls to find my way. Light shining through windows, those creepy red candle flames in a particular hallway near the library, and the blue torches contrasting with the orange sky are some elements that helped to evoke mood and the amount of lighting doesn’t effect the atmosphere in a negative way. It does also have an interesting effect on me. Rather than being encouraged by the orange sky due to it’s warm hue, it came across as foreboding and I felt much more safer being directed through the door surrounded with cold blue torches.

As far as the mapping side goes, besides from a few quirks here and there, it is fairly solid work all round. Most of the outdoor locations are presented well, which tend to feel vast with their open space and all the additions to the surroundings. I did have mixed feelings about the interiors though. While a good half look great, the other half felt lacking. It boils down to the composition of each location, some rooms make good use of object positions and lighting, while others feel as if they were just put together and nothing more. Good example is the room right after the caves, with the two doors leading into the archives and foundry. The position of the orb and its holder didn’t sit well and the rubble behind the shelves could have used more indication of this area breaking apart for it to fall through. There were also some issues with objects clipping through each other which does come across as distracting. Places like the upper archives though, looked nice. Later areas do become more visually mysterious however, with entire chambers filled with streaks of light across the walls. 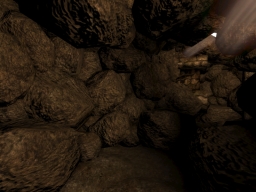 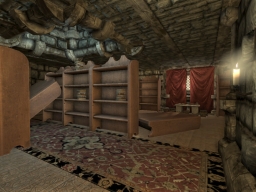 Through the Portal is linear in progression with the player guided through a series of rooms in order for them to find a way back home, while learning a few things about this realm. There’s not really much in the way for exploration besides a few readables and there’s no need to look for tinderboxes either. This comes across as mostly a visual tour from point A to point B, occasionally being chased and some minor puzzles. For this to be a different realm, it was rather disappointing to see a lack of puzzles or some more involvement with the environment. Of course, there are some things worth seeing and mystery does exist here, it’s only unfortunate that there could have been more to see and do here, making the trip more worthwhile and less of a detour home. I did quite like the ending though, seamlessly blending into the original game for one final stroke before placing the full stop.

Conclusion
While it does present a visually good looking and interesting take on what may have been on the other side of the portal, the lack of involvement or puzzles with the environment is wasted potential for all kinds of mysteries that could have been brought up for a richer story telling experience.