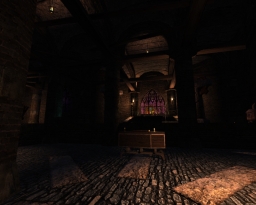 Introduction
At the foot of the mountains to the north lies an old Builder outpost, by the name of Flakebridge Monastery. It is no longer in use by the Builders and no one knows why. Most rumors are either wild stories about undead monsters, or simply a Builder priest who has gone rogue. Either way I will have to be prepared for a challenge. My target is not the usual gold or silver, but a book. It contains the unpublished works of Jerome Dunham, a musician whose last known location is the outpost.

Review
An abandoned monastery which has become inhabited with the undead only begs for some good atmosphere to liven up the place, which Jesp has done justice for right from the start. Many aspects across the mission come into this and the blend works to create this creepy setting and did feel very much like a classic Thief mission all over again. On occasion I would find darkness at the end of a hallway I was unwilling to enter, unsure what could be lurking there to give me a scare. The basement where the mission takes off has a good indication for what to expect in terms of mood and puts you in the right one along with fitting ambient tracks. Design is all around good looking with many details spread around the building from curved ceilings to wooden trim. There are even larger locations such as the church hall and outdoor locations with moonlight shining down, casting large shadows. The lower sections made use of this red brick texture which stood out for me, especially the lighting, really bringing across that damp and abandoned tone. There are many other little set pieces which add so much to the visuals too, like the stained glass windows with it’s colours being shone down onto the floor. The best part is the performance, running smooth at all times despite the scale and detail of the mission. 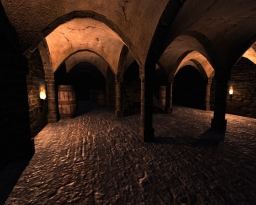 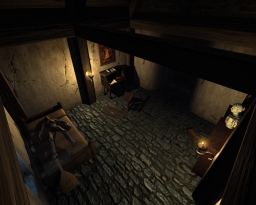 Where the design falls however is that it does become very repetitive with little there to break it up, besides from the odd few rooms and doorways, almost as if there was perhaps too much copying and pasting going on here. Combine this with some places having little purpose to them and encouraging players to run through them, tends to feel as if there are many corridors here. It seems wasteful where more could have been done to provide depth, especially in the kitchen and library areas considering the size of the building. The maze like rafters in the large church hall is a good example of making use of the ceiling, providing some interest up there while hunting down loot. The visual design is solid, but the composition of each location could have been better. Being an undead mission, I had expected the gameplay to be challenging, but it’s generally not much of a problem with the abundance of shadows to hide in. The lighting works well with the setting, but sneaking by enemies became too easy. Jesps may have put more focus on the exploration side, but there could have at least been more risky parts. There are plenty of tense moments to make up for this though and that coffin was a great touch. 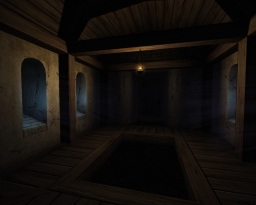 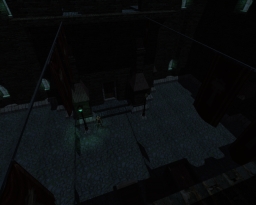 Conclusion
Manages to provide a tense and creepy atmosphere through moody lighting in a detailed environment, but falls on repetitive design. Sneaking does lack a bit of challenge but offers some good exploration.