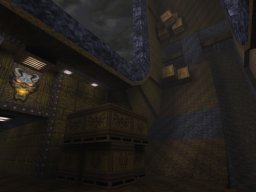 Introduction
If that last mind boggling map wasn’t enough of a tease, Digs comes back to give it another good shake with the release of a sequel, this time focusing on the aspect of disorientation while including water as a primary theme. What weird stuff awaits you this time?

Review
Having enjoyed the first release in this series, I really looked forward to giving this one a spin as soon as possible, while the brain teasing may not be quite the same, it does still offer a different take on the style. The Anomaly 2 changes gears by preventing itself from repeating what we’ve seen in the first, not only by changing the theme from idbase to medieval, but also taking a small underused segment found in the previous map and expanding on it further. Another addition is the inclusion of water and thus mixing the two to create this map. Before we had to endure tricks where a location would suddenly appear different upon returning to it through progression. This time we have to deal with disorientation where you will find a room suddenly crawling up the wall as if it expects you to defy gravity itself. This is especially pushed further with an interconnected layout only to infuse more confusion for the player. It really worked. 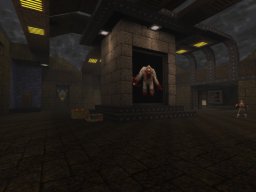 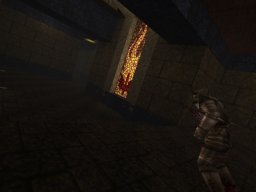 Gameplay is pretty much that, navigating this bizarre layout to locate the five switches which will unlock exit, with a bit of key hunting and getting lost on the side. Battles are usually moderate, at first against Knights, Ogres and Scrags, to later throw in Vores and the odd Shambler skirmish. What keeps the level entertaining is coming across the odd things you’ll see, figuring out how to get through a room tipped on its side, locating the twenty secrets and humour which surrounds them, and the nicely balanced action. Unfortunately partway through I found myself lost, constantly checking through the map with a fine comb for anything I missed. I gave up, reloading an earlier save to perform a rocket jump onto a specific platform which appeared to be a legitimate option considering it was the only way I could move on. The actual route is really easy to miss in a way, I passed by it several times and never realised this until going through the map to grab screenshots with noclip on. 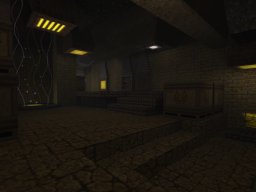 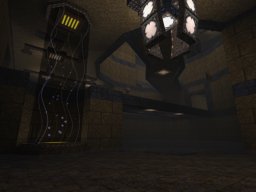 Layout in itself helps provide the visuals, which look good enough by themselves with a variety of texturing schemes, while the mapping style allows them to consistently blend together. The disorientation creates some interesting visual scenarios, like seeing crates on the floor above you or along the wall. The usage of water takes this a little further by removing any sense of physics, where streams will follow these layouts even while upside down. Water is also a key method to reaching higher places usually in the form of large tubes connecting various locations. In a way I did miss seeing the trickery that was introduced in the first map, hoping to find that once again here, since it added this creepy atmosphere where I couldn’t even trust the environment. The closest thing to this eye trickery is probably the paintings of weapons and monsters. On the otherhand, I’m also glad Digs had decided to try going for something different. I hope the same will apply if he ever decides to make The Anomaly 3.

Conclusion
The theme of disorientation and the interconnectivity works well to provide interesting visuals and provides a good layout for hunting down the five switches and to create confusion.