The Altar of Storms 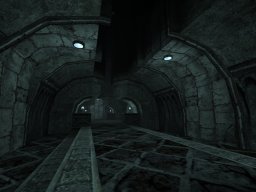 Introduction
Stuck atop frozen mountain peaks known as the Fingers of the Gods, your only way out lies in using the Altar of Storms to open a gateway and escape. You will need an ancient Rune to activate the Altar, conveniently held deep below ground in a buried city…

Review
Cold winds howl loudly as they rush between the rocky terrain while you stand before the peaks of the frozen mountains en route to the Altar of Storms. Two maps make up the overall journey to freedom, only part of this one can be explored for now. It works as an introduction for what is to come during the second half, the doorway leading to the upper section is locked tight, while a large demon roams freely to guard what you are after. Nearby, the entrance into the ruins below can be found, which must be explored in order to locate the Rune before returning here once more. Concerning the design, the landscape actually had me stunned for a few minutes while I gazed at the natural formation of the mountains surrounding the area. Even more so once I realised how little of it is utilised during gameplay. It is a shame, since noclipping to explore those areas shows just how much effort was put into constructing it and looks simply terrific. The design in the ruins themselves have been heavily influenced by the Ayleid Ruins found in the Bethesda roleplaying game, The Elder Scrolls IV: Oblivion, using a similar style of architecture with many curved surfaces and the same mint-green colour scheme, using new textures and models to help achieve that look. These ruins don’t fall short of being visually gorgeous with more than enough details expressed through the solid texturing and construction as expected from necros’ work. 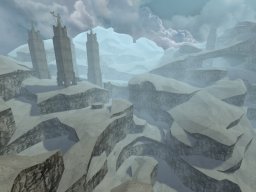 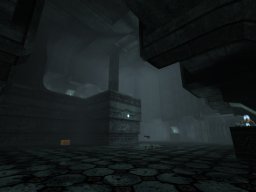 The interior of these ruins will take up a majority of the experience, strolling through these ancient hallways in order to survive against the creatures and traps which reside here. Fights are mostly dealt with in short bursts against a decent sized group of enemies which aren’t much hassle to get through and there’s always a good balance of supplies nearby. An interesting small detail to note is the lack of respawns in the typical manner, instead making use of motion to feel more dynamic, whether it be a moving stone wall to reveal enemies behind or the creatures simply running into an area. The layout generally feels right while based off Miscarcand, a dungeon found in Oblivion, providing routes which interconnect to the correct path forward. The only odd part from the layout is the midway surface area. I don’t have a problem getting a bit of fresh air, but the place feels too closed in and the elevator seemingly leads nowhere. Special effects make another appearance in this map, much like Moldy Tower. The first Silver Key gateway that you come across actually holds one of these great effects, reacting to the players’ input as they open it, the speed depending on whether they nudge or run into it along with the right level of creaking sound to accompany it. Give the gate a good enough shove will cause it to slam against the side of the stone. Much like the terrain outdoors, it’s a shame this didn’t get used more often purely for aesthetic purposes. There’s even an elevator which builds up momentum instead of a constant speed from the get go, really ensuring that mechanical appeal. Along the way, vases decorate the halls which can be broken to yield health vials and gold coins. By becoming an avid vandaliser and collecting enough coins, you can receive armour bonuses. Just beware of the vases which contain Tarbabies, which have been tweaked to poison you upon contact and will remain for a few seconds afterwards. Breaking these intentionally to aid in a fight is always an option too, despite being a risk at the same time. 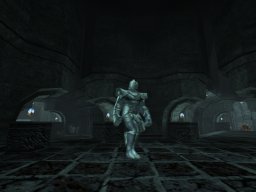 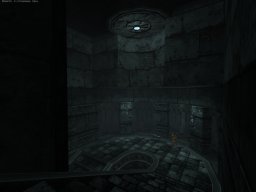 Amongst the regular set of medieval tier enemies, necros has added several new ones to feel right at home, two of which are pretty significant and worth talking about. Fast zombies will charge at you in a large horde, usually when you least expect it, to create a sudden moment of tension as they hope to corner the player and smack them around like nobodies business. They’re barely much of a threat besides from this however, as a single nail is enough to down a zombie no problem. What makes them work though is their howling as they charge through the hallways, gradually becoming louder the closer they get. Stone Golems, along with their boss variations, are a welcome addition and very fitting choice who appear like natural guardians. At first these appear to be statues purely for decoration, only for the fool who turns their back on them may receive a terrible headache. Golems are slow, but pack a punch to those who get close. Occasionally they will smash the ground and send you soaring into the air. This may cause problems or work to your advantage, depending on the situation. Boss varieties offer additional attacks to wreak havoc and gives gives them more of an edge to fight with. The quad-barrelled shotgun is another new addition, a weapon which can pack quite a punch but has the drawback of reloading slowly. Don’t fret too much though since the regular double barrelled shotgun is still usable and hasn’t been replaced. It’s easy to get a bad first impression of the weapon, since it is definitely not a good choice when cornered by several enemies at once, but soon becomes helpful against Golems or a well aimed shot within a mass of fast zombies. Get your hands on a quad damage and this weapon will down a Golem in two blasts. The weapon however is held unlike the regular bunch, although not game breaking it is a bit jarring and inconsistent. 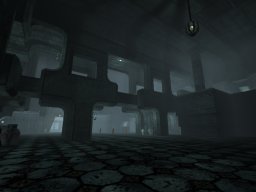 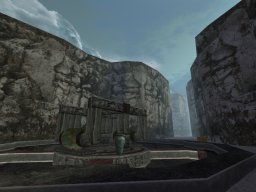 Upon grabbing the Rune and making your way back to the upper sections of the first level, the experience will round itself off with a boss finale, a struggle to survive and open that gateway home. The battle can be brutal in ways, the effects really nice and the situation tense. But there is a slight problem. It wasn’t much of a challenge at all to face up against it. This comes from the four healing pools located in each corner of the area, which will charge your batteries within no time and they also provide niches for plenty of cover against every attack coming your way. Even in the second stage of the fight there is little risk in falling out into the void as long as you stick in those areas, popping out to take a shot when you can and returning to safety. What could have possibly improved matters to make the battle tougher is forcing the pools to run out of magic and thus no longer providing any healing, forcing the player to move to another and manage how often they use them. After a while the fight felt a bit tedious upon realising how easy it is to accomplish and the tension is pretty much lost, with what was an otherwise great ride up until this point.

Conclusion
If excellent is too common of a phrase to describe this release, then I’m running out of good words to use. The Altar of Storms is a visually refreshing treat while offering a good amount of action, fun boss fights and neat little effects throughout.